There are seven-day wars and there are hundred-day wars, and having experienced both we can tell you that there is definitely a difference. The common factor is that there is conflict even though the “style” changes. When does the acute short-term blitz become a long drawn-out conflict? That’s s what this chapter is all about. A lot of shells have gone over the trench since we began exploring the defensive system of inflammation, so we would like to do a quick review of some of the essential aspects. Please turn to the Introduction (page ix) and review the basic types of inflammatory reactions. Once you have done that, come right back here (we are waiting, and the clock is ticking… ).

How do you know a chronic situation when you see it?

Whereas acute inflammation involves exudative reactions, in which fluid, plasma proteins, and cells leave the bloodstream and enter the tissues, chronic inflammation is characterized by infiltration of injured tissue by leukocytes, as well as by proliferative responses, where cells are stimulated to multiply.

Interestingly, a majority of the most crippling diseases of humans involves chronic rather than acute inflammatory reactions. Leprosy, rheumatoid arthritis, tuberculosis, chronic pyelonephritis, syphilis, liver cirrhosis, and periodontal disease are all examples of chronic inflammatory diseases.

When we said there is a difference in “style” we meant that tissue damage frequently begins “quietly” as a low-grade, smoldering response that becomes apparent only after much damage has been inflicted on the tissue.

Chronic inflammation may develop in two ways, depending on the nature of the inflammatory stimulus or stimuli involved:

and an infiltration of “round cells” (also referred to as “mononuclear cells”). These are:

Chronic inflammation is basically an immune response initiated in response to persistent antigen.

In chronic inflammation, the number of neutrophils is reduced relative to the number of mononuclear cells. (Why do neutrophils predominate in acute inflammation? What attracts them to a site of injury? We know you are growing weary, but if you can’t t handle these questions you had better review chapter 2—we won’t t tell anyone!)

Chronic inflammation is often associated with irreversible destruction of normal parenchyma. Fibrous connective tissue then fills the resultant defects. A good example of this is liver cirrhosis, where hepatic lobules are replaced by collagen fibers (Fig 7-1). 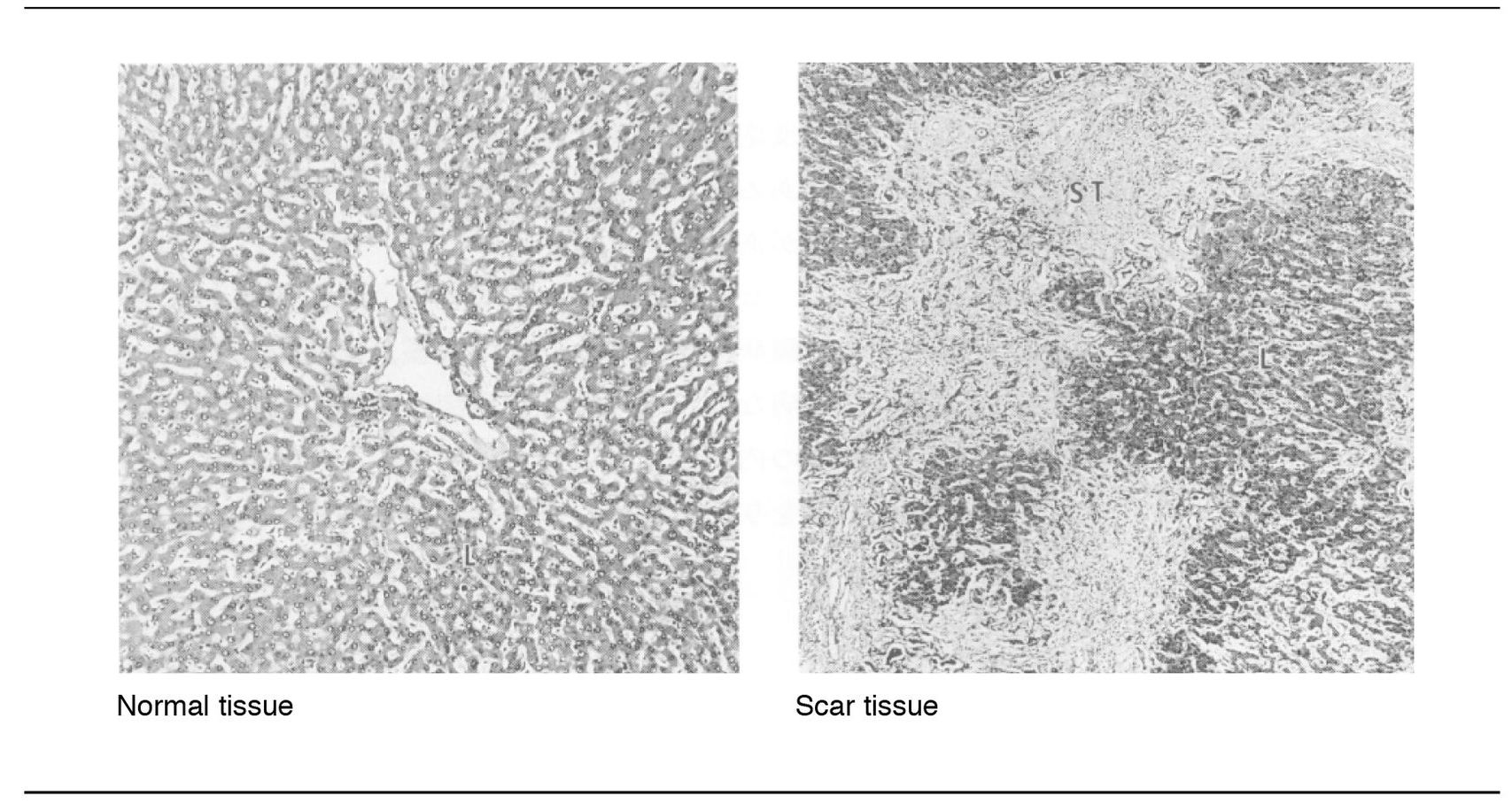 What occurs is a seesaw process of destructive mechanisms (inflammatory-degenerative) and healing (scar tissue), the end result of which may be permanent loss of function in the affected parts of the body.

Clinically, pain is often minimal or absent. Chronic inflammation may go unnoticed by the patient until it is too late to save the affected organ or organs. Thus, it lacks the warning signals that are so prominent in acute inflammation—swelling, heat, redness, and pain.

There, now you have all the general considerations. Proceed only if you hunger for juicy details. But, before we launch into details, you should remember that there is no clear boundary between acute and chronic inflammation (except in our chapters, of course). You can see that this may be so because such things as infectious agents, foreign bodies, chemicals, and immunologic factors may each produce inflammatory reactions, acute and chronic. Consequently, one could expect to see a great deal of overlap between acute and chronic responses.

The answer is yes!

As an example, let’s use the chronic abscess. Suppurative infections involve bacteria that collectively are referred to as pyogenic, or pus-producing, organisms. Pyogenic bacteria include staphylococci, many gram-negative bacilli, meningococci, pneumococci, and gonococci. When these organisms infect the skin or a solid organ, they produce an abscess. An abscess is a localized accumulation of pus consisting of dead leukocytes (predominantly neutrophils), inflammatory exudate, and necrotic tissue.

The designation, chronic abscess, is based entirely on temporal considerations. If an abscess persists for more than a few days it becomes a chronic lesion. With time, the abscess cavity containing pus is walled off by chronic inflammatory tissue that has formed around it.

The wall around the abscess is called a pyogenic membrane. Collagen fibers are oriented around the periphery of the lesion, forming a sort of capsule. In addition to fibroblasts and endothelial cells, variable numbers of lymphocytes and macrophages are found within the pyogenic membrane. Thus, the immune system creates a wall around the area of suppuration in an attempt to keep it localized and to provide support for the neutrophils (eg, opsonizing antibodies, cytokines, etc). There is a close relationship between the chronic inflammatory response and repair. This will become clear when you study the chapter on repair.

Actually, chronic inflammation can be thought of as “frustrated repair.” Repair is thwarted because it is held in abeyance by the presence of irritants. Complete removal of the irritants is essential for repair to progress to completion.

In some cases, hypersensitivity may be the cause of chronic lesions. Examples of these are rheumatoid arthritis, systemic lupus erythematosus, and allergic contact dermatitis. In other conditions, hypersensitivity develops as a secondary response that is activated during the course of a disease process. Examples of this are tuberculosis and leprosy.

Both immediate and delayed types of hypersensitivity may develop in chronic inflammation.

The basic cause of chronic inflammation is the persistence of etiologic factors that are difficult for the body to eliminate. Several major groups of causative agents are recognized.