Officers control troops with predetermined strategies and regulations. Sometimes, external forces dictate and control military actions and reactions, but usually the internal chain of command sets the pace. Inflammation is controlled by the presence of a group of substances called chemical mediators, each with a specific role at some definite stage of the inflammatory reaction. These mediators may be exogenous (arise from bacteria or chemical irritants) or endogenous in origin. In this section we will be dealing with the latter.

It is important to note that the exact sequence of the appearance of various mediators and their dependence on, or independence of, each other is still largely speculative. Furthermore, other mediators have probably not yet been identified.

Before we get into a description of the endogenous chemical mediators, it might be helpful to understand that:

The mediators we will be considering in this chapter include:

The functional requirements for the front guard are to be available immediately, be wherever they are needed, and react with initiation of the defensive system—the “call to arms.”

The vasoactive amine histamine is important in the initiation of the early phases of acute inflammation as it mediates the monophasic response of increased vascular permeability. It is stored in the granules of mast cells and basophils as a heparin–protein–histamine complex. Mast cells are widely distributed in connective tissues and are strategically located near venules and cutaneous and mucosal surfaces. Histamine is released when the mast cells degranulate (Fig 2-1) (see p. 66). The mechanism of degranulation will be discussed later.

In order to produce increased vascular permeability, histamine must attach to a receptor, H1, located on endothelial cells. Attachment causes the endothelial cells to contract, thus producing intercellular gaps through which substances can pass.

Histamine is often the first mediator to act, but its action is transient because it is rapidly inactivated. In addition to its effects on blood vessels, it mediates smooth muscle contraction in airways and the gastrointestinal tract and induces nasal mucus production. Agents that are capable of releasing histamine include:

What follows here is part of your training in the operations of the defensive system. As in any well-prepared armed service, there is built-in redundancy. Several of these redundant systems will be discussed later. While working through this information, you should also note that some of these redundant systems share mediators and activators, as well as overlap of functions. This makes a lot of tactical sense when you consider that the defensive battle was initiated by a common factor, and so, the reaction to it should be similar.

Like histamine, serotonin (5-hydroxytryptamine, or 5-HT) is a vasoactive amine, and it plays the same role as histamine. It is released from platelets by platelet activating factor (PAF), as is histamine, a minor component of platelets. We will discuss PAF later in this chapter.

There are three interrelated enzyme systems from which chemical mediators of inflammation originate. These plasma protease systems are involved in the formation of peptides, which mediate vascular permeability. The systems are the kinin, fibrinolytic, and complement systems. Both the kinin and fibrinolytic systems are triggered by the activation of Hageman factor (factor XII).

Bradykinin is capable of (1) inducing arteriolar dilatation, (2) increasing the permeability of venules, and (3) causing pain. Like histamine, bradykinin increases gaps between endothelial cells and causes a transient increase in venular permeability. Bradykinin is formed from inactive precursors (Fig 2-2): 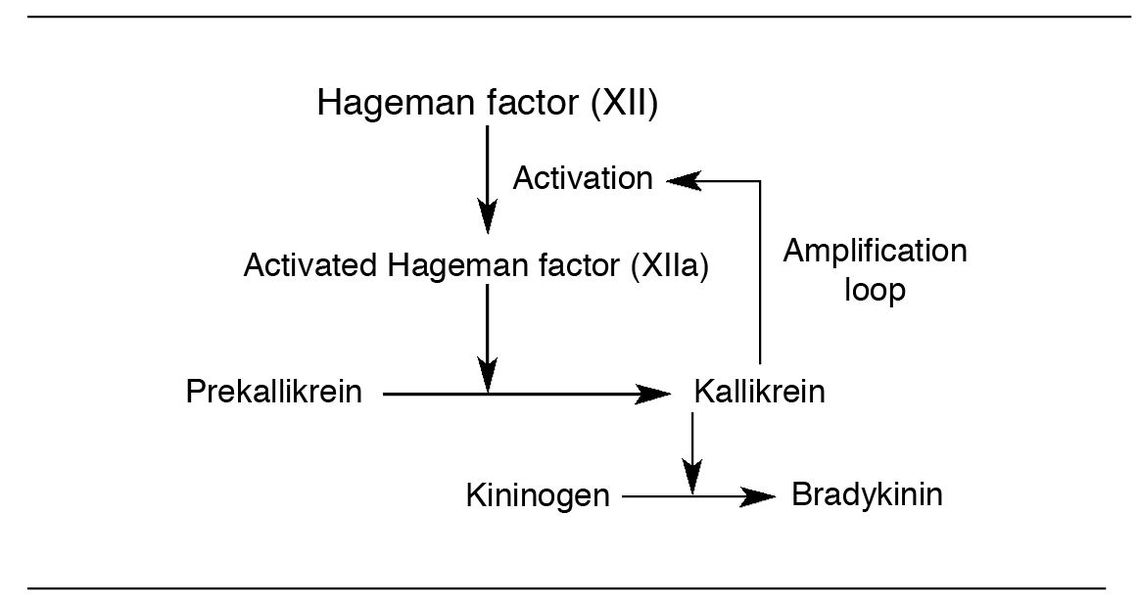 In addition to the production of bradykinin, kallikrein is active in other reactions:

Following the formation of a thrombus (a blood clot formed during life), the fibrinolytic system (Fig 2-3) is activated to dissolve the fibrin deposit. When fibrin is degraded, fibrin “split products” are formed, and these fibrinopeptides can induce increased vascular permeability. Initiation of the fibrinolytic system involves the activation of a plasma protein, plasminogen, by plasminogen activators (urokinase and tissue plasminogen activator) to generate plasmin, whose basic function is to digest fibrin clots and thrombi. 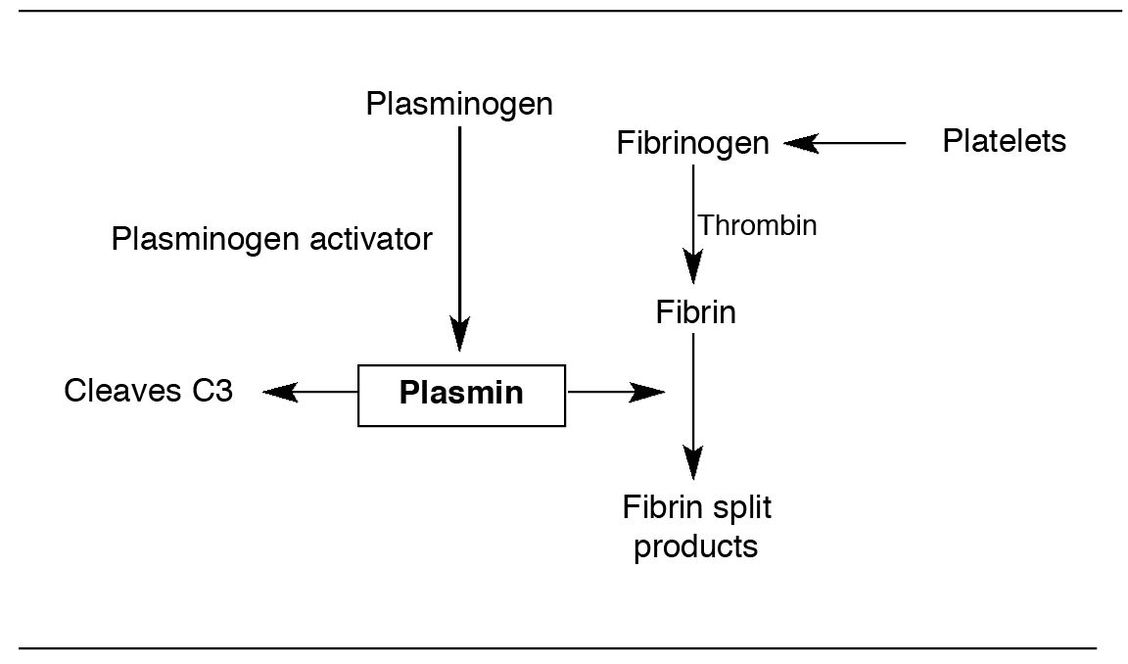 Substrates of plasmin include fibrinogen, fibrin, and prothrombin. Fibrinogen is released from platelets after they adhere to sites of endothelial cell injury. Thrombin causes the conversion of fibrinogen to fibrin. The removal of fibrin is important, as formation of a fibrin thrombus within a blood vessel decreases blood flow, leading to ischemia.

The generation of thrombin promotes platelet aggregation and secretion of inflammatory mediators by platelets, as well as endothelial cells.

There are several plasmin activating factors besides urokinase and tissue plasminogen activator:

Note: Plasmin was formerly known as fibrinolysin; this old name is still used for this system.

Advice from some old friends

If you hurried through, or even ignored, the figures associated with the last two sections (see Figs 2-2 and 2-3), you really missed out. In fact, the figures really do explain a lot about these two systems. There are a whole lot of people in Kansas who specifically remember these two systems simply because they took the time to study the figures. If you are from Kansas, we apologize for this delay, please move right on….

Things may become a little complicated for the next few pages. The reason is that the next two groups of mediators (ie, arachidonic acid metabolites and complement) both have mediator effects on the vascular response, and they do a number of other things in inflammation as well. Remember, the defensive system not only needs to activate the transport system and deliver supplies to the battleground, it also needs to sustain the process and start to get active fighting units “on-line,” in place, and actually fighting, after identifying the enemy of course. We thought we would try to explain the vascular response parts here and hit the other functions later in this book. Unfortunately, it doesn’t break out very cleanly, so you will find “pieces” of things stuck around. It’s not time to ask for a refund yet….

The complement system consists of some 20 interactive plasma and cell membrane proteins.

Once activated, complement is a potent effector mechanism for:

The system is activated in a sequence that sort of cascades along, once started up. Therefore, it comprises a number of steps of component pieces. The major components are numbered. It is interesting that the components were numbered as they were “discovered” and placed in that order. Unfortunately, C4 was discovered before C2 and C3, so, the correct sequence is listed as: