The aim of this chapter is to discuss the influence of occlusion on the outcome of complete denture therapy.

At the end of this chapter, the clinician should be aware that requirements for occlusion in edentulous patients are substantially different from dentate patients. Occlusal schemes for edentulous patients must be developed to facilitate stability and retention of complete dentures. The clinician should be aware that there are a number of occlusal schemes described and the scheme used will influence the choice of posterior teeth. The role of articulators in setting up posterior teeth should also be understood.

In Chapter 3, the relationship between retention, stability and support was outlined. A major factor that influences retention is the occlusion of the dentures. The clinician should aim for even, balancing contacts on as many denture teeth as possible during excursive movements. In a dentate patient, the ideal occlusion would be canine guided in excursive movements. If this scheme were incorporated into a complete denture, then the occlusal forces would be directed unilaterally and would overcome forces of retention. The degree of horizontal and vertical (overjet and overbite) overlap of teeth is also relevant. In a patient with a skeletal Class 2 relationship, it may be possible to reduce the amount of horizontal overlap and thus increase the number of occlusal contacts. It is also important to avoid too much anterior overbite, and an edge-to-edge relationship with minimal overbite is the most favourable arrangement (Fig 6-1). However, in some cases, this may affect speech or lead to unsatisfactory appearance. There has been much debate in the scientific literature regarding the impact of occlusion on alveolar resorption. There is little evidence to support the notion that alveolar bone resorption is accelerated by failure to provide balanced articulation. Consequently, occlusal schemes for complete dentures should be designed to facilitate: 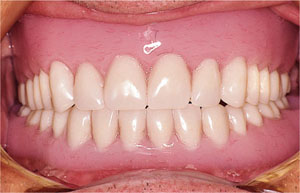 The emphasis is on the word designed as most factors are under the clinician’s control.

The condylar guidance angle cannot be altered by the clinician as this is related to the path of movement of the condyle in the glenoid fossa during excursive movements of the mandible. It cannot be represented by non-anatomical articulators, and is represented to a limited extent on semi-adjustable articulators.