The aim of this chapter is to discuss the influence of osseointegrated dental implants on treatment planning for edentulous patients.

At the end of this chapter, the practitioner should be aware of the potential benefits of implant-retained prostheses in the rehabilitation of edentulous patients. However, it should also be recognised that provision of implants may not be straightforward, and that anatomical and financial restrictions may complicate treatment. Furthermore, older adults may not wish to undergo a complex form of treatment, especially one which involves surgery. Although the benefits of implants in retaining oral prostheses are obvious, the burden of maintenance is high and something which should clearly be considered and built into the treatment plan. The clinician should consider the merits of implant overdentures retained on two implants in the mandible for older adults.

The outcome of complete replacement dentures is variable and is dependent on the patient’s ability to overcome the limitations of dentures. The advent of osseointegrated implants has dramatically improved the options for edentulous patients. The use of implants to stabilise prostheses reduces the need for the patient to develop the complex skills required to control complete dentures. Potentially, this can help improve oral function for the patient. Furthermore, it is possible to achieve greater patient satisfaction with the appearance of complete dentures which are retained on dental implants. The term “implant-supported prostheses” refers to intraoral prostheses which are entirely supported on osseointegrated dental implants. The term “implant-retained prostheses” may also be used, and these terms are often used interchangeably. It may be argued that the latter term is more appropriate for an intraoral prosthesis which shares its support between the oral mucosa and dental implants. Such a prosthesis is commonly referred to as a “hybrid prosthesis”. In all cases, prostheses are “stabilised” by implants.

Two types of complete (as opposed to partial or single tooth) prosthesis are described: (a) a fixed bridge; and (b) a removable overdenture. The fixed bridge prosthesis (superstructure) is connected to the implants (also known as fixtures) via a transmucosal abutment assembly, as shown in Fig 10-1. The prosthesis is held in place using either screws or a dental cement. In the mandible, the prosthesis is supported by four to six implants in the anterior mandible. These fixtures are placed between the mental foramina to avoid damaging the inferior dental and mental nerves. The length of the implants used is determined by the height of jaw bone available, as determined from preoperative panoramic radiographs. The distal extensions of the prosthesis are cantilevered backwards from the most posterior fixtures. At least eight implants are required to support a fixed bridge in the maxilla, as bone quality and quantity is inferior to that found in the mandible. The site of implant placement is influenced by anatomical structures such as the floor of the nose and maxillary air sinuses. 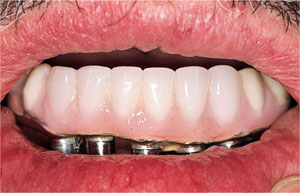 Where the number of implants which can be placed is restricted, a removable overdenture may be used. This type of prosthesis may be entirely supported by implants, or may share its support between implants and oral mucosa. In the first instance, a precious metal alloy bar is attached to the implants (three to four in the mandible, at least six in the maxilla) via a transmucosal abutment assembly (Fig 10-2). The denture is attached to the bar using metal clips embedded in its impression surface. Where support is shared between implants and mucosa, the prosthesis is retained either using a short precious metal bar (e.g. Dolder bar) and clips (Fig 10-3), or ball attachments and rubber “O” rings (Fig 10-4). This type of prosthesis is indicated where prosthesis retention is the most significant problem, and has the advantage of being less expensive than the long bar overdenture and fixed bridge options. It is less useful when the denture-bearing area provides poor support for a denture. This is likely to be the case if there is very little keratinised gingiva and if mental nerve compression is evident clinically. In this situation, either a fixed bridge or a long bar overdenture is indicated.

Fig 10-2 Implant overdenture on a long bar. (a) Metal clips in the fitting surface; (b) long bar retained on three fixtures.