5. Teeth in the Most Unlikely Places

Teeth in the Most Unlikely Places

A young woman aged 30 visited her doctor complaining of slight, intermittent pain on the right side of her abdomen. The doctor felt a small enlargement at the site of the pain and requested that an X-ray be taken. The doctor later showed the X-ray to the patient (Figure 5.1) and said ‘I have good news and bad news. The bad news is that the X-ray confirms my clinical diagnosis, namely that you have a tumour in your right ovary. This is evident from a round, dark area surrounding the central mass and suggesting it is filled with fluid. The good news is that, even without a biopsy, I am confident the tumour is benign. How can I be sure of this? Well, you can see that within the central part of the tumour there are about twelve small white structures. On an X-ray, anything white is hard, such as a bone. In this case, because of their shape, the white structures in your tumour are teeth’. 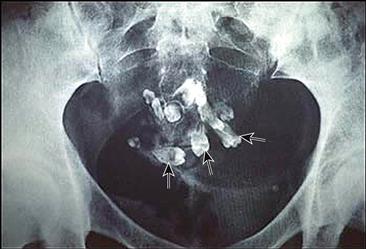 Figure 5.1 X-ray showing an ovarian cyst within which can clearly be seen at least 12 teeth (some indicated by arrows), whose white appearance confirms they are highly mineralised.

Subsequently, the tumour (also known as an ovarian teratoma or dermoid cyst) was removed and found to contain a number of teeth.

Teeth in the Tummy

Accounting for between 25% and 50% of all tumours in the ovary, teratomas are the most common type. In normal fertilisation, a sperm penetrates an egg (ovum) released from the ovary. This egg then becomes attached to the wall of the uterus where development of the baby begins. In the case of an ovarian teratoma, the egg starts to divide and grow uncontrollably within the ovary, without being fertilised. The mechanism of this process, known as parthenogenesis, remains unknown. As the egg cells have the full complement of genes and the potential to make a complete individual, it is not surprising that many different tissues may be found within the tumour, although haphazardly arranged. Many of the tissues are skin-derived, such as hair follicles, sebaceous and sweat glands, nails and frequently teeth. In addition, cartilage, bone, thyroid gland and even brain tissue may also be found. The tumour can vary in size, from small and asymptomatic to a very large mass causing swelling and pelvic pain. The condition is most common in women aged between 20 and 30 years. Smaller, less common, dermoid cysts may also occur in male testes.

Although generally occurring in one ovary, an ovarian teratoma affects both ovaries in about 10% of cases. The presence of readily identifiable tissues in well over 90% of ovarian teratomas means that the tumour is nearly always benign. Rarer (10%), malignant tumours contain more ‘primitive’ (undifferentiated) cells, which would not have been able to form such a complex organ as a tooth.

When teeth are present in ovarian teratomas, the number may vary considerably. Sometimes, only one or two are present (Figure 5.2). In other cases, several may be found. The very large teratoma shown in Figures 5.3 and 5.4 had a diameter of 10 cm and possessed 18 well-formed teeth. The roots of some teeth may even be surrounded by a bony socket. Very occasionally, the teeth are found sitting in a rudimentary jaw. Figures 5.5 and 5.6 show such a case where the teratoma was large (measuring over 15 cm in diameter and weighing 1.8 kg) and possessed a rudimentary jaw containing 14 teeth. 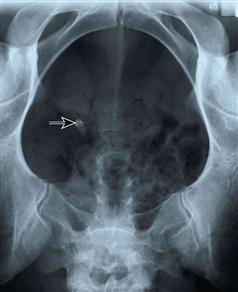 Figure 5.2 X-ray of an ovarian teratoma with only a single tooth present (arrow). 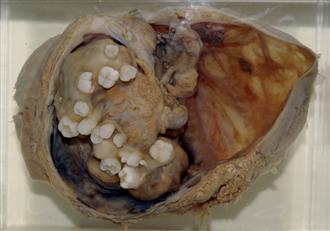 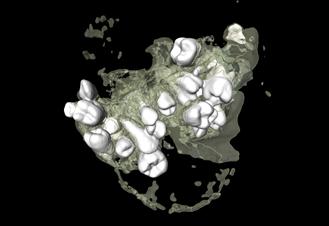 Figure 5.4 Three-dimensional reconstruction following a CAT scan, showing the detailed shape of the teeth of specimen seen in Figure 5.3. 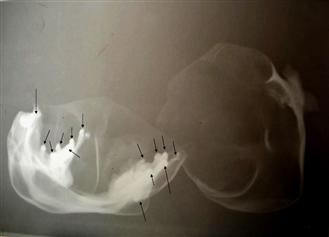 Figure 5.5 X-ray of an ovarian teratoma in which a rudimentary jaw has developed with 14 teeth present within it.

Source: From Drs S.S. Chavan and V.V. Yenni, 2009. Courtesy of the editors of the Indian Journal of Pathology and Microbiology. 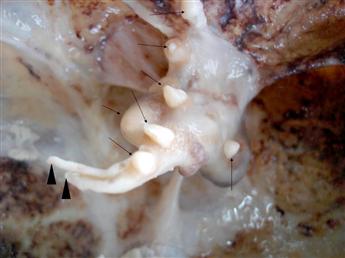 Source: From Drs S.S. Chavan and V.V. Yenni, 2009. Courtesy of the editors of Indian Journal of Pathology and Microbiology.

The teeth that develop in ovarian tumours still show all the tissues (enamel, dentine, cement and dental pulp) and microscopic features seen in normal teeth, even including the presence of growth lines. The presence of these growth lines indicates that, even in the unusual environment of the ovary, tooth development is still under the influence of the daily and weekly body rhythms as in normal teeth (see Chapter 13).

Some teeth have recognisable shapes of real teeth; others have a simple peg shape dissimilar to that of normal teeth, while others may have an intermediate shape. The majority of teeth in ovarian tumours resemble adult premolars and molars, and a minority resemble incisors and canines. Very few resemble milk teeth (see Chapter 9). The reasons for this distribution of shape are not known.

During a teaching session in th/>

Tags: Nothing but the Tooth A Dental Odyssey
Jan 5, 2015 | Posted by mrzezo in General Dentistry | Comments Off on 5. Teeth in the Most Unlikely Places
Premium Wordpress Themes by UFO Themes
WordPress theme by UFO themes