This chapter discusses referred muscle pain, the most common reason, after dental causes, for patients to complain of pain in the orofacial region.

Having read this chapter, the practitioner should be able to recognise and assess patients for referred muscle pain.

Pain of muscular origin – myogenous pain – is the most common source of non-dental pain that dentists encounter. This pain is most often described as a non-specific, dull, aching sensation of mild to moderate intensity, with a feeling of pressure or tension in the affected area. As this is a non-descript type of pain, it is easy to see how it can be confused with pain of dental origin. Although the pain is typically vague in location, it is not uncommon for the patient to be adamant that a tooth is responsible for the pain. The prudent practitioner should, in the absence of a dental problem, resist the temptation to provide any treatment: no diagnosis – no treatment.

It is not uncommon to hear of pain derived from the structural components of the jaw referred to as “TMJ pain”. This is effectively a misnomer, as the term TMJ merely refers to the joint not a condition. The more meaningful term, temporomandibular disorder (TMD), describes a problem that involves either some aspect of the joint or of the muscles of mastication – or more commonly a combination of the two. This chapter will review the problems associated with the masticatory musculature. The most common problems tend to be characterised by pain.

The function of the masticatory musculature is to open and close the jaw and maintain jaw posture. The latter is required as gravity tends to pull the jaw downwards when we are in an upright position. Muscle tonus is required to stabilise the jaw in its resting position, with the teeth separated by a few millimetres: the freeway space. Muscles in the neck and back have a very important role to play in maintaining posture. Some are also involved in jaw posture. Postural muscles are more likely than other muscle groups to be involved in pain conditions, as they are made up of a type of muscle fibre that is designed to cope with long-term, low-level tonus or tension. For this reason, muscle pain tends to be associated with postural muscles.

The muscles involved in jaw closure are masseter, medial pterygoid and temporalis. These are the, muscles primarily involved in TMDs (Fig 5-1). The jaw is unique amongst the musculoskeletal systems of the body in that the masticatory muscles are the only ones to have a fixed, unyielding end-point to their activity; this is the the intercuspal position (ICP). 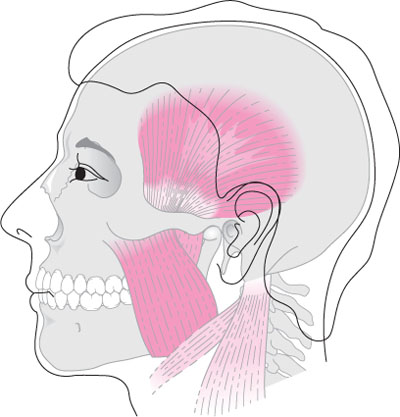 The muscle primarily involved in opening the jaw is the anterior digastric. This is a relatively small muscle, reflecting the level of work required of it. To a lesser extent, the lateral pterygoid muscles may be involved in both opening and closing.

The physical make-up of the masticatory muscles reflects the type of activity required of them. This activity involves a combination of relatively brief forceful movements, as required in chewing, and a constant low-grade activity required of the jaw-closing muscles to maintain jaw posture. Parafunctional activities, including jaw clenching, biting and chewing habits and bruxing, tend to be problematic for the masticatory muscles as they involve sustained high-level activities that the muscles were not designed to undertake.

The pain originating in muscles is know as myogenic pain and is generally non-inflammatory, despite its possible improvement with the use of antiinflammatory agents, including non-steroidal anti-inflammatory drugs (NSAIDs). The analgesic properties of these drugs allow a return to normal function by reducing pain levels and thereby facilitating healing. There is, at times, an inflammatory cause for myogenic pain; such pain is referred to as myositis. It is most commonly seen as a result of direct trauma to a muscle, for example injury to the medial pterygoid muscle following needle penetration during the administration of an inferior dental block. 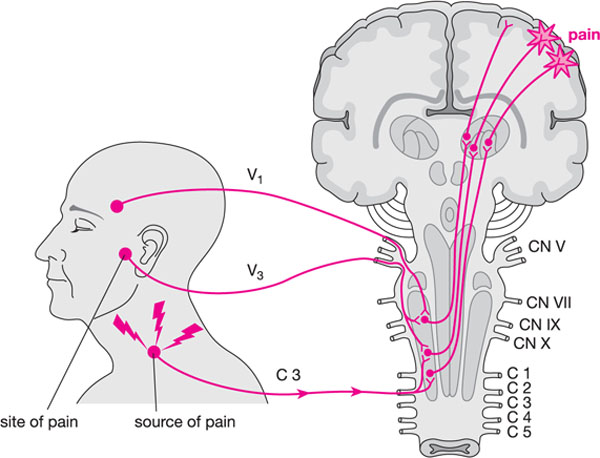 Headaches in patients with muscle pain is often, but not exclusively, referred pain from the temporalis muscle. Cervical muscle problems may give rise to/>