The aim of this chapter is to discuss factors which influence the aesthetics of complete replacement dentures.

At the end of this chapter, the clinician should understand that loss of natural teeth and subsequent alveolar resorption has a significant impact on appearance. It is possible to restore appearance with complete dentures, and good communication with the patient is essential. The clinician should understand that aesthetic requirements must be discussed carefully with the patient at the planning stage of treatment. In some cases, it is not feasible to meet the patient’s aspirations for the appearance of their dentures, and a compromise must be reached prior to commencement of treatment. The clinician should also make use of reference points such as old photographs or previous dentures with a satisfactory appearance.

When natural teeth are extracted, bone volume decreases. Bone resorption in the maxilla occurs mostly on the buccal aspect and this leads to a decrease in lip support. Biometric guides have been described to indicate where the teeth would have been positioned prior to extraction. The reference points are the epithelial band on the crest of the alveolar ridge and the incisive papilla (Fig 5-1). The epithelial band is the remnant of the gingival margins of the teeth, and varies in size. Using these landmarks as a guide, incisor teeth are placed 6 mm anterior to the incisive foramen, and the canine, premolar and molar teeth are placed 8 mm, 10 mm and 12 mm respectively from the epithelial band. In theory, if the denture teeth are placed in these positions, then the appearance of natural teeth can be restored with complete dentures. However, there are a number of aspects to consider when deciding whether to follow these guidelines. Many patients will have been edentulous for many years, and their concept of what constitutes a “normal” appearance may differ from that of a dentate patient. When biometric guides are used to guide denture aesthetics, the teeth will appear much more prominent and may not be acceptable to a patient accustomed to a “regular” denture teeth set up. Anthropometric measurements have also been used to guide the selection of anterior teeth for complete dentures. These include dividing the bizygomatic width by a factor of 16, and using the ratio of the cranial circumference to the width of the maxillary anterior teeth (estimated to be 10:1). The concept of relating tooth form to age and sex of the patient has also been used, and this approach suggests that men should have large square teeth, whereas women should have smaller rounded teeth. Certainly, these guides can be useful when the patient has not had dentures before but whether they should be used routinely is questionable. 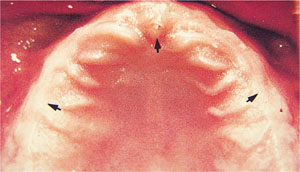 A further consideration is the impact of tooth position on the retention and stability of the denture. Anterior tooth position also influences speech patterns. Consequently, the approach to designing an aesthetic scheme for complete dentures must be guided by the patient’s wishes and functional requirements.

The process of developing an aesthetic scheme for anterior denture teeth begins at the jaw registration stage described in the previous chapter. The wax rims should be adjusted to indicate the desired buccolingual positioning of the teeth and the level of the occlusal plane to the technician. The clinician should check the following when undertaking this task. 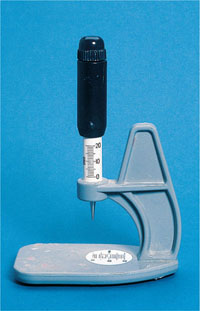 Fig 5-2 Alma gauge. This instrument can be used to measure the distance of the incisal edges of the teeth from the incisive papilla.

Is the patient dissatisfied with the appearance of their previous denture? The clinician should decide what is the source of this dissatisfaction: