The tooth did not respond to electric or thermal sensibility test, but was tender to percussion. There was no loss of motor or sensory function of the surrounding tissues in the 13 region. A radiograph of 13 (Figure 5.2.1b) revealed a periapical radiolucency.

When a hypochlorite accident is suspected, it is very important to carefully examine the radiograph for signs of perforation of the root or other avenues through which the irrigant may have inadvertently leaked into the surrounding periapical tissues. In this case, there was no obvious sign of a perforation on the radiograph.

A diagnosis of chronic periapical periodontitis associated with an infected necrotic pulp was made for 13. The patient suffered a ‘sodium hypochlorite accident’ whilst the previous dentist was preparing the root canal.

After initial pain management, reassurance and follow-up (Table 5.2.3), the treatment options discussed with the patient were:

One week later at the follow-up appointment, the patient’s symptoms had improved significantly. The patient opted for root canal treatment of 13. Endodontic treatment was carried out under local anaesthetic and rubber dam. Initially, the access cavity was enlarged to ensure complete removal of the coronal pulp and to facilitate straight-line access for instrumentation and irrigation of the apical-third of the root canal. A dental operating microscope was used to check for signs of perforation.

What other ways are there to confirm the presence, and the location of a perforation?

A working length was obtained with the aid of an apex locator, and confirmed with a working length radiograph (Figure 5.2.2a). Following thorough chemo-mechanical preparation, the canal was obturated with gutta-percha and sealer using a warm vertical condensation technique (Figures 5.2.2b–c). The patient was reviewed 1 month later to confirm soft tissue healing. The patient reported no symptoms, and the ulcer was healing well, but with some evidence of mucosal scarring (Figure 5.2.3).

Figure 5.2.3 One month later the ulcer had considerably reduced in size. 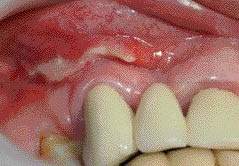 Irrigation is essential during root canal treatment. The irrigant primarily acts as a vehicle for the removal of debris and infected material. In addition, depending on the irrigant used, it may have additional bactericidal and tissue-dissolving properties. Sodium hypochlorite has been shown to be an effective root canal irrigant due to its excellent bactericidal and tissue-dissolving properties. The mode of action of sodium hypochlorite is based on the action of chlorine derivatives on microorganisms. These derivatives attack the bacterial cell wall, altering it physically, chemically and biochemically. In addition, the metabolism of bacteria is disrupted by oxidation of important bacterial enzymes by free chlorine.

What is a sodium hypochlorite accident?

How does a sodium hypochlorite accident usually present?

Most patients will experience sudden sharp pain during irrigation, which will be followed by rapid swelling of the tissues adjacent to the tooth being treated. These signs and symptoms are the hallmark of a hypochlorite accident.

In some cases, the pain, which is usually described as a burning sensation, will continue as the area affected increases in size following the accident. The facial architecture, such as the nasolabial fold, may be lost as the lip and cheek swell. In addition, there may be bruising of both the extraoral and intraoral tissues. Local neurological function may be affected immediately, or in the days following the accident (Table 5.2.1). For example, if the inferior dental nerve is affected, this may lead to altered or complete loss of sensation to the area of distribution of this nerve.

Table 5.2.1 Immediate signs and symptoms of a hypochlorite accident