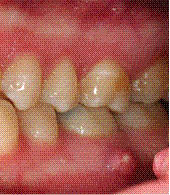 The 36 did not respond to thermal or electric sensitivity tests. The 35, 37, 46 and 47, all responded normally to both thermal and electrical tests.

A pre-operative radiograph of the lower left molar region was taken which revealed a periapical radiolucency associated with 36 (Figure 4.5.2a). A further radiograph was taken with a gutta-percha point inserted into the sinus tract in order to confirm the source of the infection (Figure 4.5.2b).

Figure 4.5.2 (a) The first pre-operative radiograph demonstrates a periapical radiolucency associated with 36, whilst the second radiograph, (b) taken with a gutta percha point inserted into the sinus, confirms that the 36 is the source of the infection. 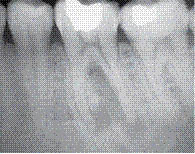 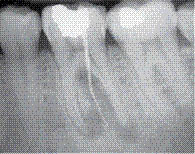 A diagnosis of chronic periapical periodontitis with a sinus tract associated with an infected necrotic pulp was reached for 36.

The treatment options for 36 were:

Following discussion of the treatment options, the patient elected to have root canal treatment and a definitive restoration. It was felt that the tooth did not require a post-endodontic cuspal coverage restoration as both marginal ridges were intact, as indeed were the buccal and lingual walls.

Prior to carrying out root canal treatment, it is important to have an up-to-date good quality radiograph of the tooth to be treated. This allows advance planning of the endodontic procedure, and provides important information, for example, the estimated working length(s) of the canal(s) (Table 4.5.1).

What is meant by the ‘working length’?

The working length of a root canal is the distance from a specific coronal reference point (for example, mesio-buccal cusp tip) to the chosen apical end-point of root canal preparation (Figure 4.5.3). 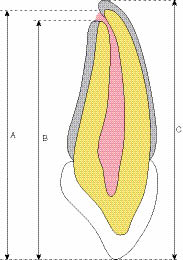 What are the drawbacks of estimating working lengths from radiographs?

With plain film radiographs, estimated working length(s) may be measured directly from the radiograph. With digitally acquired images, most of the software packages offer a measurement facility which can be used to estimate the root canal length(s). However, even with radiographs taken with a beam aiming device, the length(s) derived from these images will always be subject to a degree of error and 5–10% magnification.

Conventional radiographic techniques produce a compressed two-dimensional image which can only provide limited clinical information with respect to the three-dimensional anatomy of the root canal. For example, a radiograph will not demonstrate root curvatures in the bucco-lingual plane. Even with the use of a beam aiming device, conventional periapical radiography has poor geometric accuracy and is susceptible to image distortion. Bisecting angle radiographs should, if possible, be avoided as they are susceptible to even greater distortion and inaccuracy. These images are also very difficult to reproduce.

Superimposition of various anatomical structures and image distortion may result in a limited diagnostic yield from conventional radiography. For example, superimposition of the zygomatic arch over the root apices of the upper molar teeth may commonly occur during periapical radiography in this region, resulting in difficulty assessing the root canal anatomy.

The pulp chamber was accessed, and the root canal orifices were located and coronally flared. Following this, the length of each of the root canals was determined.

What are the important apical anatomical landmarks?

The apical region of the root canal has been studied in great detail, and descriptions of the anatomy of this area are well documented. Changes to the anatomy of the root apex may occur throughout the life of a tooth as a result of inflammatory resorption and the deposition of cementum.

The main anatomical landmarks of the apical region of a tooth are (Figure 4.5.4):

Figure 4.5.4
Diagrammatical representation of the apical region
A – The anatomical apex
B – The major apical foramen
C