6.3: Restoration of a root treated tooth with a post-retained crown

The diagnosis was chronic periapical periodontitis associated with an existing root canal treatment.

What were the treatment options for this tooth?

Following discussion of the various treatment options, the patient decided to proceed with root canal re-treatment of the 12. The patient was advised that a post may be required to retain the new crown, and that a final decision could only made once the existing crown had been removed and the amount of remaining sound coronal tooth structure had been assessed (Figure 6.3.2). 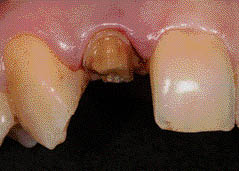 Why was it necessary to remove the crown?

Following local anaesthesia, a putty index of the upper incisor teeth was taken. The porcelain-bonded crown on the 12 was sectioned using a tungsten carbide bur, once the crown had been sectioned, it was loosened and removed. The tooth was assessed, and judged to be restorable, after which rubber dam isolation was obtained. The root canal was located, and the existing gutta-percha root filling was removed using Gates Glidden burs and stainless steel hand files. Copious irrigation with sodium hypochlorite solution was carried out throughout the procedure. The working length of the root canal was determined using an electronic apex locator; and a radiograph was taken to verify this reading (Figure 6.3.3). Root canal preparation was then carried out using a combination of stainless steel hand files and nickel–titanium rotary instruments. After completion of root canal preparation, the canal was rinsed with ethylenediamine tetra-acetic acid (EDTA) solution, followed by a final flush with sodium hypochlorite. The canal was dried with paper points, and the apical 5 mm of the root canal was obturated with gutta-percha and sealer using warm vertical compaction. The patient was advised that the tooth would require a post-retained crown.

Posts are necessary when there is insufficient tooth structure to support the coronal restoration. In most cases where a post is required, the definitive restoration will involve the provision of a crown. The purpose of a post in this case was to facilitate the retention of the core; this core or foundation could then be used for retention of the crown.

What is meant by the ferrule effect?

The ferrule effect refers to the circumferential collar of cast metal or ceramic (provided by a crown), which encircles the near parallel walls of dentine, coronal to the margins of the crown preparation (Figure 6.3.4).

Figure 6.3.4 The ‘ferrule effect’ refers to the circumferential band of a crown that encircles the remaining coronal tooth structure. Ideally, there should be at least 2 mm of sound dentine (height) which is encased by the crown margins. The ferrule reduces the incidence of root fracture and also provides an optimal seal. (a) A post-crowned tooth with no ferrule. The fulcrum axis is such that occlusal forces are transmitted entirely into the root with no protection from the remaining tooth structure, (b) A post-crowned tooth with a ferrule. The presence of an adequate ferrule of dentine moves the axis of rotation and dissipates forces more favourably, reducing the risk of root fracture. 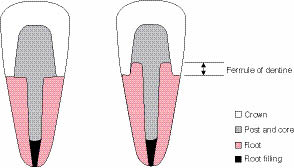