The adrenal glands consist of the outer adrenal cortex and the inner medulla, both of which produce hormones.

The Adrenal Medulla: The secretions of the adrenal medulla are controlled by the autonomic nervous system. The medulla secretes epinephrine (adrenaline) and norepinephrine (noradrenaline).

Cortisol is released daily from the adrenal cortex and it helps the body regulate metabolism of protein, carbohydrates, and fat.< ?pgbrk -4pt?> Additionally, cortisol release helps fight stress and suppress inflammation. Glucocorticoids also raise blood sugar levels by increasing gluconeogenesis, which is the synthesis of glucose from amino acid. This action ensures glucose supplies for the body when it is under stress.

The hypothalamus releases the corticotropin hormone (CRH). CRH stimulates the pituitary to release the adrenocorticotropic hormone (ACTH). ACTH stimulates the adrenal cortex to release cortisol, which is also called “hydrocortisone.” Cortisol, in turn, provides negative feedback to the pituitary and the hypothalamus when an adequate cortisol level is reached (see Figure 40.1< ?anchor c40-fig-0001 ?>). 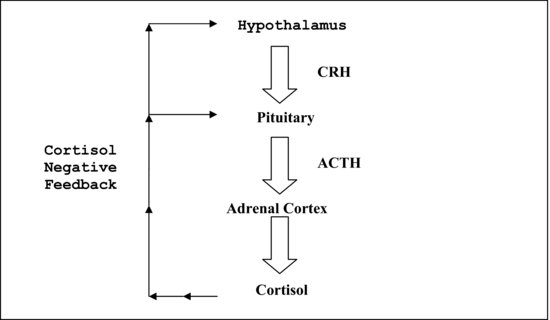 The anti-inflammatory potency of prednisone is four times that of hydrocortisone (Solu-Cortef). Thus, the maximum amount of steroid replacement given during stressful times should be about 25–40 mg prednisone PO or 100–150 mg hydrocortisone PO/IV.

Aldosterone is the main hormone that helps maintain the plasma sodium and potassium balance. Aldosterone secretion is regulated by the renin-angiotensin system, ACTH, and the plasma sodium and potassium levels. When exposed to a decline in blood volume and/or low blood pressure, specialized kidney cells release the enzyme renin and the hormone erythropoietin into the circulation. Renin converts angiotensinogen, an inactive protein secreted by the liver, into angiotensin I. In the lungs, angiotensin I is converted to angiotensin II, and the zona glomerulosa then responds to the presence of angiotensin II in the circulation, stimulating aldosterone production by the adrenal cortex.

Erythropoietin that is also released by the kidney stimulates red blood cell production, elevating blood volume and improving oxygen delivery to peripheral tissues. Mineralocorticoids restrict sodium and water losses at the kidneys, sweat glands, digestive tract, and salivary glands and promote sodium or salt reabsorption by stimulating the kidneys to absorb more sodium from the blood.

When the blood volume becomes abnormally large, specialized cardiac muscle cells secrete the hormone atrial natriuretic factor (ANF). This hormone suppresses the secretion of ADH, aldosterone, and catecholamines, and it reduces thirst thereby encouraging water loss at the kidneys and lowering of the blood pressure. This response reduces blood volume and blood pressure. Aldosterone-secreting tumors are rare causes of hypertension that are resistant to conventional blood pressure treatment.

The androgens released by the adrenal cortex help with protein anabolism and growth.

The adrenal medulla produces catecholamines, epinephrine (adrenaline), and norepinephrine (noradrenaline), which raise the blood sugar and fatty acid levels. The catecholamines increase the heart rate, myocardial contraction, myocardial excitability, blood pressure, and sympathetic tone, thus preparing the body for the “fight or flight” response. These hormones also promote vascular constriction of blood vessels supplying the skin, kidneys, gastrointestinal tract, and other areas of the body that are not needed for the response.

It is important to note that catecholamine-secreting tumors (pheochromocytoma) are rare causes of hypertension that are resistant to conventional blood pressure treatment. These patients are curable by surgery.

Excessive steroids given for the management of, for example, asthma, rheumatoid arthritis, lupus, or chronic skin conditions can increase cortisol levels in the blood.

Treatment options are surgery, radiation, or medication. In February 2012, the FDA approved mifepristone to control hyperglycemia in adult patients who are not good surgical candidates. Mifepristone is contraindicated during pregnancy because it promotes abortion.