To describe the types of fibre post which are available and their clinical indications.

At the end of this chapter, the reader should be knowledgeable on the properties of fibre posts, and should have sufficient knowledge to be able to cement a fibre post and to build up a composite core.

Root canal treated teeth are regarded generally as susceptible to fracture, but the idea of tooth reinforcement by means of the insertion of a post has been heavily criticised. Armed with this knowledge and concerned that post placement may carry other risks such as root perforation, many practitioners have tended to avoid the use of posts wherever possible. If, however, the remaining tooth structure is not sufficient to support a core, the use of a post is the only alternative if a reliable restoration is to be placed, and tooth loss avoided.

The properties of a post-core reconstruction become all the more important as residual tooth structure decreases. Some desirable features of post-core materials include:

Fibre posts were introduced to the market in 1990, with the aim of providing more elastic support to the core, compared to that provided by metal posts. The reduced stress transfer to the tooth structure was claimed to reduce the likelihood of root fracture.

The first fibre posts were made from carbon fibres, which were arranged longitudinally and embedded in an epoxy resin matrix. Black carbon fibres were rapidly replaced by more aesthetic white and translucent quartz and glass fibres (Fig 4-1) which are now the standard components of fibre posts. 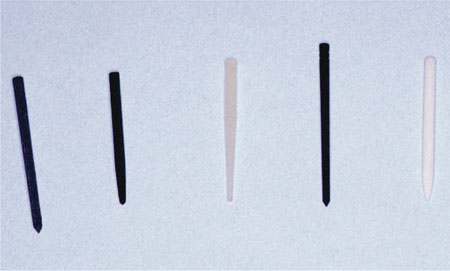 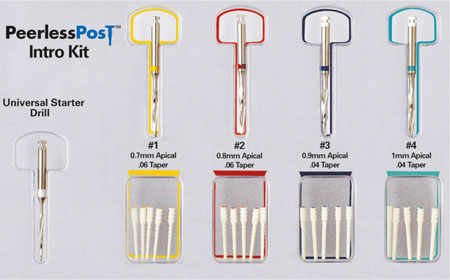 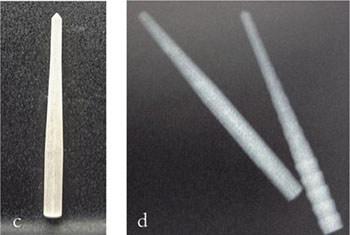 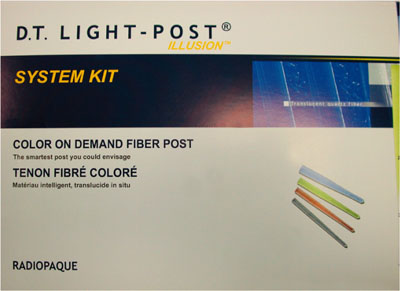 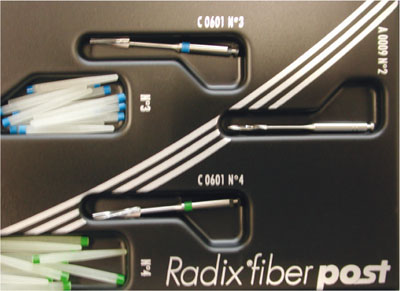 A key difference between fibre and metal posts is that fibre posts lose much of their flexural strength if they are submitted to cyclic loading in a wet environment or to thermocycling. This is related to degradation of the resin matrix in which the fibres are embedded. The failure mode of fibre-post restored teeth is not normally root fracture, as is often the case with metal posts, but decementation, which may be associated with marginal leakage and the development of secondary caries.

The adhesion of the fibre post to composite, as used in a core build-up, is mostly micromechanical, with irregularities on the surface of the post providing retention for the bonding resin (Fig 4-2). Recent work has suggested that silanisation of the post surface may increase the retention of the composite core and adhesion with the luting cement. 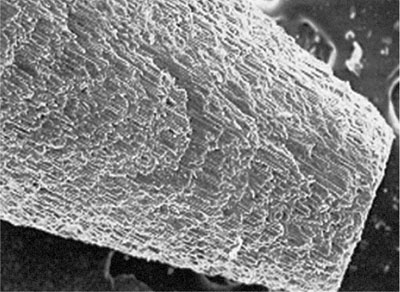 Fig 4-2 (a) SEM image of a fibre post, revealing the roughness that ensures micromechanical bonding to the composite cement. 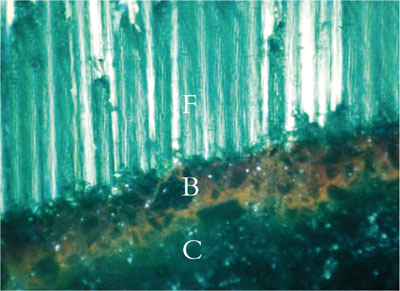 The vast majority of prospective studies on fibre posts report failure rates in the region of 2 to 5% after 2–5 years of clinical service. Most of the cases reported to have failed did so because of post decementation, chipp/>