General anesthesia has been defined as an irregular, reversible depression of the higher centers of the central nervous system (CNS) that makes the patient unconscious and insensible to pain.1 Pallasch2 described general anesthesia as “hypnosis (sleep or loss of consciousness) accompanied by the loss of protective laryngeal reflexes (cough). Ideally, general anesthesia represents the simultaneous presence of analgesia (loss of pain), amnesia (loss of memory) and hypnosis along with reflex inhibition and loss of skeletal muscle tone which allows for safe surgical procedures.” When the CNS is depressed to the extent that consciousness is lost, changes occur in the physiology of the patient that would be life threatening in the absence of a “guardian” trained in the management of the unconscious patient. These changes include partial or complete airway obstruction, hypoxia, hypercapnia, loss of the ability to clear the tracheobronchial tree, respiratory depression, blood gas and pH changes, cardiovascular depression, and depressed or absent protective reflexes.

Since the introduction of the techniques of minimal, moderate, and deep sedation into clinical practice, the requirement for general anesthesia has diminished. Minimal and moderate sedation possess a number of advantages, not the least of which is the retention of consciousness and the ability of the patient to maintain his or her airway and protective reflexes. One of the inherent dangers of general anesthesia is that these three factors are lost, making it the obligation of the anesthesiologist to provide a patent airway and to protect the patient during the period of unconsciousness.

I. Stage of Analgesia The first stage of anesthesia starts with the initial administration of a CNS-depressant drug and continues to the loss of consciousness.
1. Respiration is normal.
2. Eye movements are normal, with voluntary movement possible.
3. Protective reflexes are intact.
4. Amnesia (the lack of recall) may or may not be present.
II. Stage of Delirium Stage II begins with the loss of consciousness and progresses until entry into the stage of surgical anesthesia (stage III).
1. Respirations are irregular early in stage II, but become more regular as stage II deepens.
2. Eyeballs oscillate involuntarily, a movement termed lateral nystagmus.
3. Pupils react to light normally.
4. Skeletal muscle tonus is increased, with muscular rigidity present in some patients early in stage II. Muscle tonus decreases as stage II deepens.
5. The laryngeal and pharyngeal reflexes (swallowing and laryngeal closure) are still quite active early in stage II, but become progressively more obtunded as stage II progresses.
III. Stage of Surgical Anesthesia Entry into stage III is marked by several signs:
1. The respiratory irregularity observed in stage II disappears. Respiration is automatic and involuntary, responding to the level of CO2 within the blood.
2. Muscular tonus is lost, unlike the increased muscular tonus seen in stage II. The patient’s head may now be moved from side to side, and the mouth may be opened with ease.
3. Swallowing and reflex respiratory arrest will not occur if the anesthesiologist suddenly increases the concentration of an inhalational anesthetic. Both of these responses will occur in stage II.
Most surgical procedures are performed at this level of CNS depression when the intercostal muscles weaken and thoracic respiration becomes decreased. IV. Stage of Respiratory Paralysis Stage IV begins with the onset of respiratory arrest and ends with the cessation of effective circulation (cardiac arrest). 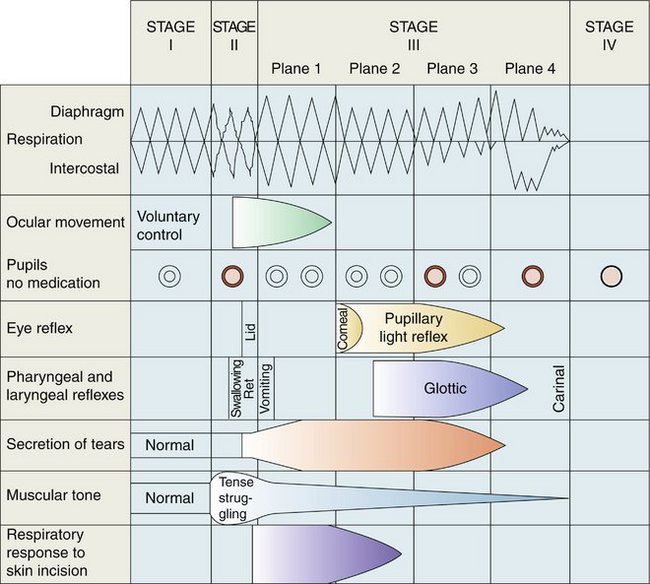 1. Success rate of 100%. When the end point of titration of a CNS-depressant drug is the loss of consciousness, the technique, general anesthesia, will have a success rate of 100%. General anesthesia is the only patient management technique with this success rate. Sedation, minimal, moderate, or deep, requires a balancing of the patient’s needs versus the risks of either undermedicating (e.g., undersedation) or overmedicating (e.g., oversedation). With general anesthesia, the CNS-depressant drug(s) will be administered until the desired clinical effect, loss of consciousness, is achieved.
2. Patient cooperation is not absolutely essential for the success of general anesthesia. One of the disadvantages of all sedative techniques is that some degree of patient cooperation is necessary for the administered drug(s) to produce the desired clinical effect (the inhalation route), to administer the drugs (IV), or to proceed with dental treatment. In situations in which loss of consciousness is the goal (general anesthesia), patient cooperation, although desirable, is not essential. The patient may, if necessary, be premedicated with intramuscular (IM) or intranasal (IN) drugs with general anesthesia induced with inhalation anesthetics. Once the patient is unconscious, IV access is established and the anesthetic procedure continued in the usual manner.
3. The patient is unconscious. The loss of consciousness will be considered as both an advantage and a disadvantage (see following discussion). The fearful patient, the patient with a management problem, and the patient with a mental or physical disability can receive quality dental care in a well-controlled environment, whether it is a dental office or the operating theater of a hospital or an outpatient surgical facility (e.g., surgicenter). Dental care may be impossible to undertake or the quality of care significantly compromised if this patient remains conscious.
4. The patient does not respond to pain. Although most general anesthetics possess either no or only minimal analgesic properties, the level of depression of the patient’s CNS in general anesthesia prevents visible response (e.g., movement, phonation) by the patient to the nociceptive stimuli reaching the brain. There will be variation in this response depending on the level of CNS depression. Technically, there is no need for the administration of local anesthetics during some surgical procedures, including dentistry, performed under general anesthesia. However, it is strongly recommended that local anesthetics be administered during general anesthesia to prevent painful stimuli from ever reaching the brain. In this way, the concentrations or volumes of general anesthetic drugs required to maintain a smooth, even level of general anesthesia will be decreased thereby minimizing the occurrence of dose-related complications from the anesthetic drugs.

During ultralight general anesthesia with IV barbiturates (e.g., methohexital or thiopental) or, more commonly today, propofol, the use of local anesthesia is more critical to success. In ultralight general anesthesia, the level of unconsciousness (e.g., the depth of CNS depression) is kept minimal to hasten the patient’s postoperative recovery. However, when this happens, the patient may respond to noxious stimulation during the dental or surgical procedure.

To prevent this response, two things may be done: The level of CNS-depression may be increased and/or local anesthesia administered. Increasing the depth of general anesthesia through administration of additional drugs will prolong the recovery period, which in outpatient settings is undesirable. Through the administration of local anesthesia, response to painful procedures is prevented both during the operative procedure and, equally important, into the postoperative period.

5. Amnesia is present. With loss of consciousness, amnesia occurs. For extremely fearful patients, a lack of recall of events occurring during treatment represents the major indication for the use of general anesthesia or other techniques (e.g., IV) that provide amnesia. In cases in which amnesia is the primary requirement in a procedure, general anesthesia can usually be avoided. The use of IV moderate sedation with midazolam or diazepam is recommended in place of general anesthesia. Approximately 1 in 1000 patients receiving general anesthesia is aware of what is happening around him or her during surgery.3
6. General anesthesia may be the only technique that will prove successful for certain patients, such as the precooperative child, extremely fearful adult, and certain patients with either physical or mental disabilities, such as multiple sclerosis, cerebral palsy, Down syndrome, or autism.
7. The onset of action of general anesthesia is usually quite rapid. In general anesthesia, drugs are administered by the IV or inhalation routes, two routes with the most rapid onset of action. In most situations, loss of consciousness will occur in under 1 minute.
8. Titration is possible, with the patient receiving the smallest volume of drug required to produce the desired effect.

In addition to monitoring equipment, other equipment is required for the administration of general anesthesia, including a laryngoscope, endotracheal tubes, and oropharyngeal or nasopharyngeal airways. The absence of adequate equipment either for monitoring or the administration of general anesthesia represents an absolute contraindication to the use of this technique.