Teeth can become partially discolored from a number of causes. Excessive fluoride ingestion or a higher-than-recommended level of natural fluoride content in the local water supply can result in brown and/or white fluorosis staining. Partial brown tooth discoloration also can be idiopathic or the result of trauma sustained during tooth formation. Brown discoloration responds to bleaching treatment about 80% of the time, generally requiring 2 to 6 weeks of nighttime treatment. Although partial white stains usually cannot be removed using bleaching, treatment does result in whitening of the unstained portions of the teeth, thereby making the stains less noticeable.

Many clinicians are more familiar with using abrasion techniques, which predate the recent home bleaching era, to treat white or brown partial discolorations. A common technique is called microabrasion, which involves the softening and removal of both enamel and the surface defect and is accomplished with rubber dam isolation, hydrochloric acid and pumice, and a special geared-down handpiece. This procedure is a subtractive method of stain removal, with 12 to 26 μm of enamel removed per 5-second application. Another abrasion technique is called macroabrasion, which involves the use of rotary instruments such as a carbide bur in a high-speed handpiece for enamel removal. This is followed by polishing with composite finishing disks and polishing points or pastes.

Bleaching, as a more conservative approach, is generally the first choice of treatment for brown and white stains, followed by abrasion techniques. However, if there is an unsightly, rough, and poorly formed white discoloration covering the majority of the tooth surface, using abrasion first to establish a smooth surface may be the best approach. In most cases, the teeth are more yellow after the white surface is removed; therefore, bleaching is often required following abrasion.

Long-term results have been achieved with nightly bleaching of partial brown tooth discolorations without the need for follow-up treatment.

CASES 1 AND 2 Brown and white stains

The advent of nightguard vital bleaching has offered a more conservative option to abrasion for the treatment of partial brown and white stains. If the enamel surface is intact, shiny, and hard, then nightguard vital bleaching should be the first choice for removal of brown discolorations or masking of white areas. This whitening technique avoids the removal of the fluoride-rich enamel layer and does not alter the line angles or shape of the tooth. In the event that bleaching treatment is not successful, the abrasion technique remains an option.

If the white discoloration appears as one or more isolated spots, it is better to bleach first to lighten the background of the tooth rather than attempt abrasion. Although bleaching does not remove the discoloration, it often makes the white areas less noticeable, and no further treatment is needed.

Highly noticeable brown and white discolorations from fluorosis in a young male patient.

Tray bleaching with 10% carbamide peroxide has removed the brown discolorations. In addition, the white discolorations are less noticeable because of the lighter shade of the rest of the teeth and the removal of the brown stains.

Brown and white discolorations on the anterior maxillary teeth of an elderly woman.

Tray bleaching with 10% carbamide peroxide removes a majority of the brown discoloration and whitens the teeth to approximately the same shade as the white-discolored portions of the teeth.

Three-year posttreatment view. After bleaching was completed, the anterior teeth were re-contoured to further enhance their esthetic appearance. No further bleaching treatment has been performed in the period since, yet the effect of the bleaching has been maintained. 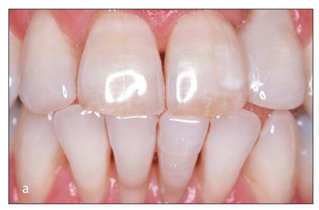 Brown discolorations were present in the anterior dentition of this adult patient. 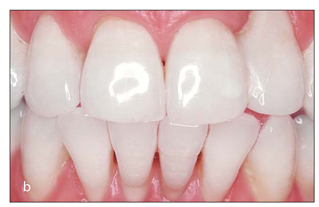 The stains were removed following 6 weeks of nightly tray bleaching with 10% carbamide peroxide. 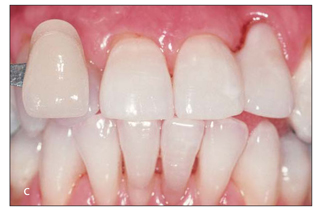 Three years after bleaching and with no further treatment, the brown discolorations have not returned.

Fourteen-year-old boy with brown discoloration of uncertain etiology, possibly the result of trauma to the primary tooth during permanent tooth development.

After 6 weeks of bleaching treatment with 10% carbamide peroxide, the brown discoloration is eliminated.

Posttreatment view 3 years after bleaching. The right central incisor shows no evidence of brown discoloration. No further treatment or touch-up bleaching was performed.

Posttreatment view 10 years after bleaching and no additional treatment. Removal of brown discolorations may be permanent in some patients. 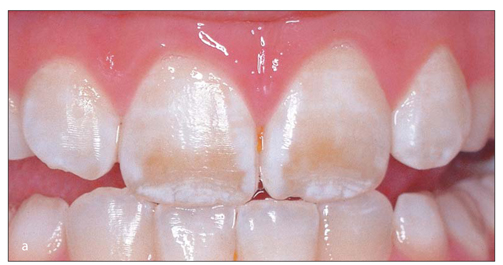 This 10-year-old male patient presented with unexplained brown discolorations on both central incisors. 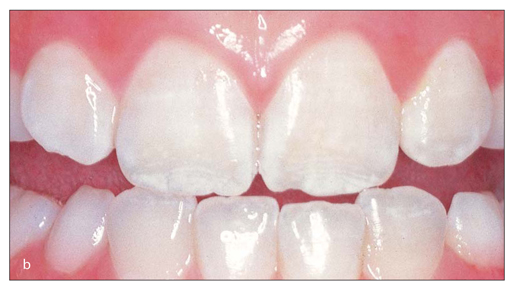 After only 1 week of nightly tray bleaching with 10% carbamide peroxide, the brown discoloration was removed. Should it return, the stain could easily be re-treated in the same manner.

Bleaching has little or no effect on most of the common esthetic restorative materials, such as composite and porcelain; it does not lighten them and generally does not harm them. The most significant effect from bleaching previously restored teeth is that the teeth are lightened enough that the existing restorations may appear comparatively dark and therefore require replacement for esthetic balance.

Although bleaching releases a significant amount of oxygen into the tooth, the bond of existing composite restorations is not weakened; therefore there are no contraindications for bleaching in the presence of existing bonded restorations. However, the oxygen-rich tooth structure does not provide a good surface for bonding new restorations as it hinders the polymerization of the resin. A delay of 2 weeks or more following the bleaching process allows this effect to dissipate so bonding can be performed effectively. This also allows the tooth shade to stabilize prior to selecting the shade of the restorative material.