• the role of microbes in the etiology and pathogenesis of the various diseases involving the tooth root canal system;

• the effect of the treatment procedures on the microbial infection;

• methods of preventing reinfection of the root canal. 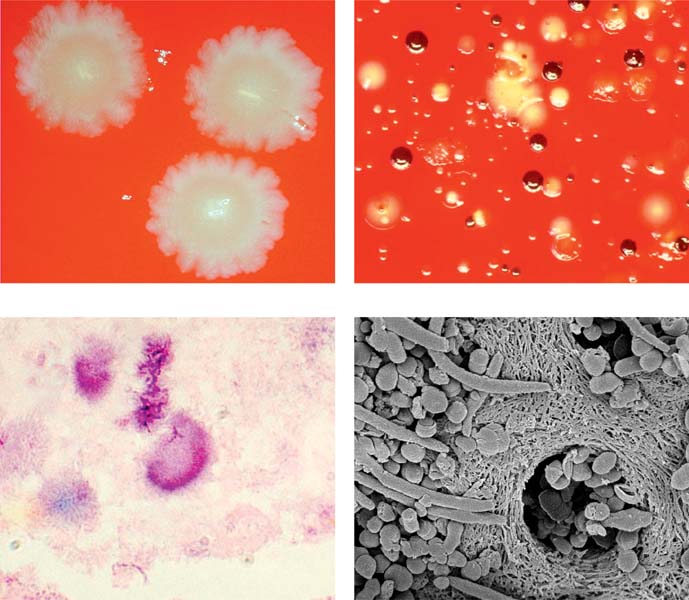 Above right: Prevotella intermedia (dark brown) and Porphyromonas gingivalis (light brown) colonies together with colonies of other bacteria from an infected root canal.

The connection between microbes and apical periodontitis (AP) is well established. Using gnotobiotic rats (rats raised in a sterile environment), Kakehashi et al. (1965) were the first to demonstrate the indisputable causal relationship between periapical inflammation (apical periodontitis = lesion of endodontic origin [LED]) and the presence of microbes in the root canal. Compared with normal rats, gnotobiotic animals with pulps exposed to the oral cavity and saliva with no bacteria developed no periapical disease.

Kakehashi and coworkers’ results were verified and refined further by Bergenholtz (1974) and Sundqvist (1976), who showed that intact necrotic human teeth exhibited apical periodontitis only if bacteria were present in the root canal, whereas necrotic teeth with a sterile root canal exhibited no periapical pathoses.

Kakehashi et al. (1965) demonstrated that pulpal exposure without bacteria did not lead to pulpal necrosis in gnotobiotic rats (a). However, as soon as experimental animals came into contact with rats with normal oral bacterial flora, radiographs revealed pulpal necrosis and periapical lesions shortly after (b). Sundqvist (1976) studied intact but necrotic teeth with and without periapical lesions. Periapical lesions could only be detected in teeth in which bacteria could be identified in the root canals and subsequently cultured (c, d).

3.3 Bacterial infection is the cause of apical periodontitis

Left: Inflamed area within the coronal pulp. Although bacteria have not yet progressed into the pulp, an initial inflammatory reaction appears.

Right: Gram-stained biopsy from the necrotic root canal of a tooth with associated AP; note the relatively even distribution of numerous leukocytes (red) Gram-positive cocci, and rod-like bacteria (blue).

Left: The radiolucent periapical lesion in this necrotic tooth indicates the presence of an infection in the necrotic root canal.

Middle: AP in an apparently intact tooth. The etiology in such a case is usually trauma, which leads to necrosis. Bacteria penetrate through microscopic canals and lateral canals, or as bacteremia into the root canal.

Right: A fractured H file in a tooth with a partially filled root canal; the file extends far beyond the apex. The radiograph shows no evidence of an apical lesion.

Pathogenesis of Pulpitis and Apical Periodontitis

The initial immunologic reactions in the development of pulpitis occur in response to bacterial antigens released from the advancing bacterial front within the carious lesion. These antigens are first “examined” by the antigen-detecting/antigen-presenting cells (APCs) of the pulp.

Dendritic cells are the main APCs in the pulp and macrophages (except histiocytes) which have major histocompatibility complex (MHC) class II molecules on their cell surface (Jontell et al., 1998). The class II molecule is a gene product of MHC and present foreign material (e.g., antigens) to T cells in the regional lymph nodes for recognition.

Following this, memory T cells are released into the circulation in the tissues, including the pulp, where they contribute to the secondary immune response. When the microbial cells in the advancing front of the carious lesion enter the pulp, infiltration of polymorphonuclear leukocytes and other inflammatory cells such as T memory cells and plasma cells can be observed.

Immunologic defense reactions anywhere in the body cause local tissue destruction, and the pulp is no exception. Micro-abscesses and focal necrosis can sometimes be seen in the pulp even before the carious lesion (and the microorganisms) invades the pulp.

With progression of caries and increasing antigen challenge, the area of necrosis increases in size and eventually the entire coronal pulp becomes necrotic. It is only at this stage that the root canal(s) of the affected tooth will have become infected.

Acute inflammatory responses to advancing infection in the periapical area involve numerous cells of the host inflammatory response system, and are induced by endogenous mediators such as prostanoids, kinins, and neuropeptides. Interleukin-1 and prostaglandins are key mediators of periapical bone resorption by osteoclasts (Stashenko et al., 1998).

Left: Stability in the periapical region: The immune defense cells inhibit an invasion of microorganisms from the necrotic root canal.

Middle: In a case of chronic AP, the osseous tissue is resorbed by multinucleated osteoclasts that are activated by an immunologic cascade.

Left: A radiograph showing a deep carious lesion in a maxillary premolar. The maxillary second premolar also has a periapical lesion representing AP.

Right: Granulocytes, plasma cells, and lymphocytes are apparent in this histologic section of this periapical region of a tooth with chronic AP. 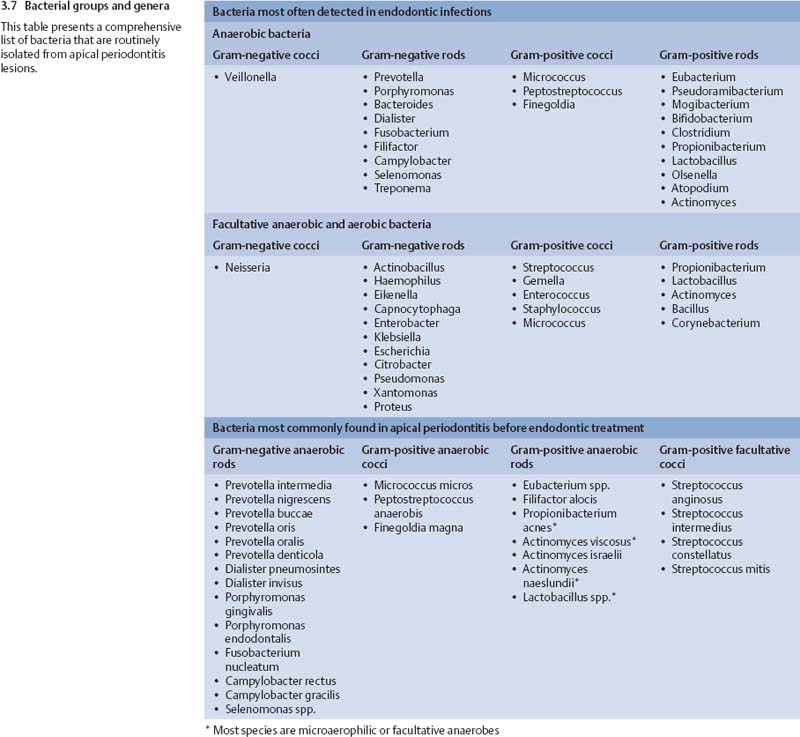