The aim of this chapter is to provide an update on the confusing array of enamel and dentine adhesive systems available for clinical use with restorative materials.

Readers will understand the mode of action of the bond between enamel and dentine adhesive systems and dental substrates. This understanding will aid comprehension of the advantages and disadvantages of each system, including bond durability.

Adhesive dentistry is widely considered to have begun when Buonocore described in 1955 a method of bonding acrylic filling materials to enamel by the application of acid to the enamel as a surface pretreatment. In 1968 Buonocore hypothesised that the bond was based on the creation of resin tags engaging microporosities in acid-etched enamel (Buonocore et al., 1968).

The Structure of Enamel

Enamel consists (by volume) of 86% inorganic hydroxyapatite crystals, 12% water and 2% organic matrix (Fig 3-1). The hydroxyapatite crystals, which are the shape of flattened hexagons, are tightly packed together in the shape of prisms and bound together by the organic matrix. The crystals are not “pure” hydroxyapatite (Ca10(PO4)6(OH)2) but have carbonate molecules substituted within the lattice. This is deleterious to the acid resistance of enamel, as the carbonate groups are more susceptible to demineralisation. Fortunately, however, fluoride ions can also be substituted into the lattice network, forming fluoroapatite or fluorohydroxyapatite, which is more resistant to demineralisation. These fluoride ions can be obtained by topical application of fluoride-containing toothpastes, mouthrinses or varnishes, or released by fluoride-releasing dental restorative materials. 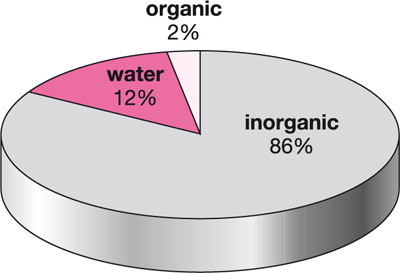 The crystals are bound together to form enamel prisms. A network of interconnecting spaces and micropores exists between the crystals, which provides a pathway for the diffusion of fluids, ions and other low molecular weight substances between the oral environment, the dentinal tubules and, ultimately, the pulp. Therefore, topical applications of agents such as fluoride or bleaching agents are not only active on the surface of the tooth, but also have the potential to diffuse through the full thickness of enamel.

Restorative materials can be bonded to the surface of enamel by the topical application of acid. The most commonly used acid is orthophosphoric acid, which, when applied to enamel for around 15 s, removes around 10 μm of the surface, prior to creating a range of etch patterns, which may involve loss of enamel prism periphery, loss of enamel prism core or a diffuse appearance with no specific pattern.

This surface etching increases the surface area of enamel hugely and creates pores, up to 20 μm deep, that become filled on contact with restorative materials. Etching also raises the surface energy of enamel and increases the ability of applied bonding resins to wet the surface, ensuring intimate adaptation. A low-viscosity hydrophobic bonding resin is then applied, which will often contain bis-GMA, UDMA, HEMA or TEGDMA. Photopolymerisation (light-curing) of the bonding resin creates micromechanical retention between the enamel and the resin. Bonding resins bond chemically with the methacrylate groups of subsequently applied restorative material by copolymerisation. The clinical use of etchant and enamel and dentine adhesive systems is illustrated in Figs 1-15, 1-16, 2-4 and 2-5.

The optimum concentration of phosphoric acid is around 37%. Higher concentrations cause precipitation of salts that inhibit further demineralisation of the enamel. It is important to adequately wash away the demineralised enamel components for 5–10 s and to dry the enamel with compressed air from a three-in-one syringe. Care must be taken not to dry any exposed dentine excessively as this may reduce the bond strength to dentine and cause post-operative sensitivity. When correctly applied, reliable and durable bond strengths of 20 MPa are obtained. This bond strength can be greatly reduced if the enamel is contaminated with blood or saliva during the bonding process. It is therefore important to maintain a clean, dry field by isolating the tooth, ideally with a rubber dam. The bond to dentine is less reliable and subject to breakdown over time; therefore, restorations bonded to enamel around all of the cavity periphery are less likely to experience failure of the adhesive bond compared with restorations bonded at least in part to margins of dentine.

The Structure of Dentine

Human dentine consists of 50% (by volume) mineral, which is a carbonate-rich and calcium-deficient apatite, 30% organic material, largely Type I collagen, and 20% dentinal fluid (Fig 3-2). It also contains very small amounts of other proteins and organic components (Marshall et al., 1997). 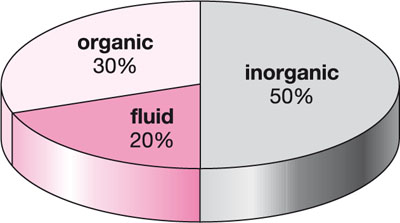 Dentine comprises tubules containing odontoblast processes and fluid, with the numbers increasing from the enamel–dentine junction towards the pulp chamber. The tubule lumen is lined by highly mineralised peritubular dentine with apatite crystals and some organic matrix. The tubules are separated by intertubular dentine, which is less mineralised and contains a matrix of Type I collagen reinforced with apatite. Dentinal tubules are more numerous and have a larger diameter close to the pulp. The tubules gradually become smaller in diameter and less numerous towards the enamel–dentine junction. Dentinal fluid is under a slight positive pressure from the pulp (25–30 mmHg). The clinical significance of this is that cavities that cut into deep dentine have a larger proportion of cut tubules exuding wet dentinal fluid than superficial cavities.

There are many different types of dentine: primary and secondary, formed physiologically; and tertiary – sclerotic, transparent, carious, demineralised, remineralised and hypermineralised – altered by age and disease processes (Marshall et al., 1997). These variations in dentine morphology result in bonds with adhesive restorative systems being variable.

Non-carious cervical lesions are difficult defects in which to retain a composite resin restoration with a dentine adhesive system. These lesions are formed by combinations of erosion, abrasion and abfraction. The dentine tubules are occluded by mineral deposits with hypermineralisation of the intertubular dentine. The peritubular and intertubular dentine is more resistant to demineralisation and, as a consequence, the hybrid layer is much thinner and with few, if any, tubule resin tags.

Dental instrumentation produces a smear layer which covers the underlying dentine structure and penetrates several microns into the dentinal tubules, forming smear plugs. The smear layer, which is typically 0.5–5.0 μm thick, is easily dissolved in weak acids. It consists of partially denatured collagen and mineral, sometimes bacteria, and is only weakly adherent to the underlying dentine, with a bond strength of up to 5 MPa (Pashley, 1992). Early generations of dentine adhesive systems attempted to bond to the smear layer, but given its inherent weakness, unacceptably low bond strengths were obtained.

Phosphoric acid is the most commonly used acid etchant; however, nitric, citric and maleic acids are also sometimes used. Most recent formulations of etchants are in the form of a gel, rather than a liquid, as gels are easier to place and control. Gels are formed by the addition of silica particles or polymer thickening agents to a liquid. Concerns have been expressed as to whether gels containing silica leave a residue of particles that may interfere with bonding, but this does not appear to be the case, let alone clinically significant.

Dentine adhesive systems can be classified according to either their order of introduction to clinical practice – first, second, third, fourth, fifth, sixth and seventh generation – or by a description of their action. Classification by action will be used here to aid understanding of clinical applications.

These dentine adhesive systems require the application of an acid etchant or conditioner to the surface of the dentine. After a prescribed time, the etchant is washed away and the dentine dried with compressed air. This is followed by the application of a primer and then the adhesive resin. In three-step systems the primer and adhesive are applied sequentially, and in two-step systems the primer and adhesive are combined into one bottle. Examples of three-step and two-step etch-and-rinse adhesives are illustrated in Figs 3-3 and 3-4. 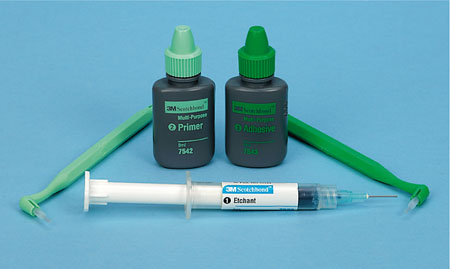 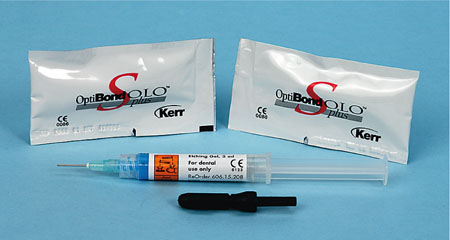 Acids applied to tooth structure to demineralise enamel and dentine are referred to as etchants or conditioners. Their effect on enamel is described on page 34, and when applied to dentine they demineralise the surface, exposing collagen fibrils, which intermingle with the applied adhesive to form the hybrid layer, first described by Nakabayashi et al. in 1982. The conditioner is usually 30–40% orthophosphoric acid, but may be nitric, citric or maleic acid, and is usually applied to dentine at the same time, or slightly after, it is applied to any adjacent enamel.

The network of collagen fibrils formed by etching is susceptible to collapse if the fibrils become dehydrated. If it is in a collapsed state, the adhesive resin cannot adequately intermingle with it and produce a hybrid layer. Collapse occurs if the drying of the dentine after rinsing away the etchant is too prolonged or vigorous. Collapse of the network can, however, be reversed by rehydrating the collagen by application of a water-based primer. Water-free primers cannot rehydrate collagen and if applied to overdry dentine are ineffective in helping to create a hybrid layer. An alternative approach is “wet bonding”, in which the ideal degree of hydration of the dentine is described as a shiny moist surface. Excess pools of water should be removed by blottin/>