The aim of this chapter is to outline the biological basis for prevention and management of pulp disease. A rational approach to the treatment of disease requires an understanding of the pathological process, which in turn, demands knowledge of the normal anatomy and physiology of the involved tissues (see Chapter 1). Given the low-compliance encapsulation of the pulp and its apparent fragility as a tissue, it was once believed that relatively minor events could precipitate pulp necrosis and infection. Yet, the pulp shows remarkable resilience and ability to repair and survive an aggressive oral environment and generally unsympathetic dental interventions. Clearly the pulp–dentine complex is adapted for such survival and this chapter explores the interplay between host mechanisms and restorative factors that determine the direction of the outcome.

Functions of the pulp

The functions of the pulp are stated to be formative (dentine) and defensive (through the pulp–dentine complex, inflammatory and immune responses). Once the tooth is fully formed, the pulp mainly serves a defensive function. The pulp is not a vestigial organ, as indicated by the definite change in the rate at which dentine is deposited once tooth formation is complete. Hypothetically, if secondary dentine deposition continued at the rate of primary dentine formation, the almost complete obliteration of the pulp would result in a tooth with very different mechanical properties. By inference, the raison d’être of the pulp and dentine must be to provide a tooth with the resilient characteristics necessary for withstanding masticatory load. Note that the tooth is considered the hardest structure in the body and referred to as a non-compliant environment from a fluid dynamics perspective. Yet, from a mechanical perspective, dentine can flex at a microstrain level, detectable by sensitive strain gauges. This microscopic deformation of the tooth under occlusal load must, by the principle of homeostatic mechanisms, be detectable by proprioceptors in the pulp; however, direct evidence for the existence of proprioceptors in the pulp is absent. The presence of Aβ fibres, which serve a proprioceptive function, offers an attractive, if partial, explanation for the apparently greater susceptibility of pulpless teeth to fracture.

Defence reactions are essential for the survival of the pulp. The most obvious and widely described defence reactions include: the initial inflammatory response in the pulp; blockage of the involved dentinal tubules by large molecular substances in the transudate; the sclerosis of the dentinal tubules by mineral deposition and formation of peritubular dentine; and, finally, the laying down of secondary and tertiary dentine (Fig. 2.1). 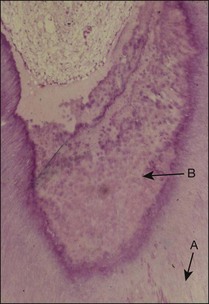 Fig. 2.1 Primary (A) and irregular secondary (B) dentine

The pulp–dentine complex has been thought of as a sensory organ that warns against developing disease (e.g. caries or other forms of surface tooth tissue loss) by eliciting pain. In this role, the warning system is not effective given the proportion of teeth whose pulps become irreversibly inflamed apparently without prior pain. The recently exposed dentine may become sensitive over a few days but, thereafter, as the pulp recovers, the sensitivity too would subside.

The first line of sensory defence involves stimulation of the low-threshold cutaneous-type Aδ nerve fibres, responsible for the sensation of the characteristic sharp, lancinating dentinal pain elicited by stimulating dentine by probing, air blast, hyperosmotic fluids, extreme temperatures or occlusal loading (in the cracked tooth syndrome). Inflammation in the vicinity of the exposed tubules reduces their threshold and leads to hyperalgesia or hypersensitivity. In addition, it also allows stimulation of the higher threshold C fibres that are responsible for the deep-seated, less localized, duller, throbbing pain associated with pulpitis. Stimulation of proprioceptive Aβ nerve fibres may forewarn the owner of impending overloading of the tooth.

In addition to sensory defences, the inflammatory response of the pulp contributes to recruitment of the full array of non-specific and specific immunological responses (see Chapter 3). This system protects the pulpal soft tissue against external molecular or microbial assault. An extremely important function of the pulp–dentine complex, which often works simultaneously with inflammation, is secondary (reactionary) or tertiary (reparative) dentine formation (Fig. 2.2) together with dentinal tubule sclerosis (calcification) (Fig. 2.3) to block off further ingress of noxious factors. It is likely that severe inflammation may interfere with the dentinal response by disturbing the odontoblastic function. 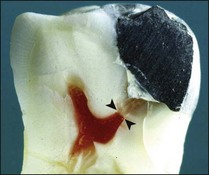 Fig. 2.2 Secondary dentine deposition caused by caries and its treatment 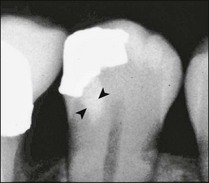 Reparative processes within the pulp–dentine complex mimic developmental processes. During tooth formation, molecular signals (growth factors) between epithelial and mesenchymal cells control the induction of odontoblast differentiation. The growth factors have a profound effect on various cellular activities and are found throughout the body. A subclass of these molecules, called the transforming growth factor-beta (TGF-β) family, is responsible for signalling odontoblast differentiation. The differentiated odontoblasts synthesize and secrete the TGF-βs together with other growth factors and sequester them into the dentine matrix, which then becomes calcified. The subsequent dissolution of the dentine matrix as a result of caries, tooth surface loss or restorative procedures releases these molecules again to exert their influence on healing. TGF-β molecules released by mild dentine–pulp injury diffuse along a concentration gradient down the dentinal tubules, against the outward flow of dentinal fluid, and stimulate viable odontoblasts to lay down reactionary dentine. Injury that is severe enough to damage odontoblasts irreversibly requires their replacement from the pulpal mesenchymal cell pool. This is a lengthier and more complex process requiring the migration and differentiation of new cells followed by secretion of a new matrix. The resulting dentine is, therefore less well organized and known as reparative dentine (see Fig. 2.1). An important factor that may interfere with the reparative process is a continuing microbial challenge as a result of coronal leakage, as well as the toxicity of any restorative material, which would both intensify the inflammatory process (Fig. 2.4). 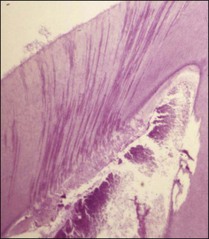 The pulp may be injured in a variety of direct and indirect ways. These are summarized in Table 2.1 (Figs 2.5–2.7). The pulp may be injured either by interference with its blood supply or by damage to, or through, the pulp–dentine complex. Direct interference with the blood supply may occur in acute (impact) or chronic (occlusal) traumatic injuries. Injuries through the pulp–dentine complex may occur by: (1) induction of cracks or fractures in the tooth structure (through acute or chronic traumatic injuries); (2) exposure of dentine through natural (attrition, abfraction), dietary (attrition, erosion), parafunctional (attrition, abrasion), habitual (attrition, abrasion), pathological (caries, resorption) or iatrogenic (operative or cosmetic) processes; or (3) direct exposure and damage to the pulp. 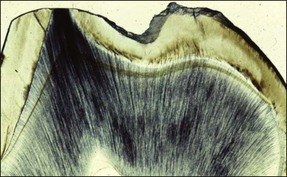 Fig. 2.5 Effect of attrition on dentine 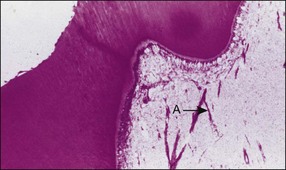 Fig. 2.6 Effect of caries on the pulp: A = inflamed pulp tissue 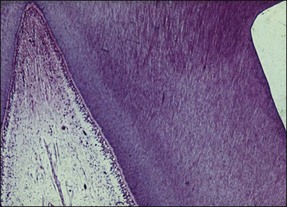 Fig. 2.7 Effect of cavity preparation on the pulp

Exposure of dentine through any of the mentioned processes would induce direct physical injury to odontoblastic processes and the cell body. The disruption would cause the tight junctions between odontoblasts to separate and be pushed away centrally into the pulp; this would allow pathways of fluid flow from the pulp to open up. Equally, the pulp would then be open to stimulation by microbial factors by diffusion, albeit against the tide of outward flowing dentinal fluid. The degree of such exposure to flowing or diffusing substances would be dependent on the surface area of exposure, permeability of the dentinal tubules and depth of dentine damage. The permeability of dentinal tubules is affected by several factors, including involvement in the carious process, physiological response, pathological response, exposure to acidic oral environment, calcification, and coverage by restorative materials. The rate of damage to the dentine, whether carious or non-carious, may also influence the ability of the pulp to defend itself. The dentine reputedly has a strong buffering capacity against the inflow of bacterial substances by binding them to the walls of the tubules.

The physiopathological mechanisms in place, namely, inflammation, outflow of dentinal fluid, temporary blockage of tubules by protein molecules, followed later by mineralization (dentinal sclerosis) and formation of reactionary dentine help to close off the avenues of direct pulp exposure, in time. If such closure were not possible because of a precompromised pulp unable to generate the reparative response, then the unrelenting inflow of microbial stimulants would eventually lead to chronic inflammation and pulpal demise. The mechanism for such progression may begin with an accumulation of polymorphonuclear leucocytes (PMNs) at the boundary of the pulp–dentine complex with migration of these phagocytic cells into the dentinal tubules. Observation of this phenomenon was originally misinterpreted as “aspiration of odontoblasts”. This would be followed by migration of macrophages, particularly if an irritating or allergenic material had been deployed.

These would then be followed by the specific response, including T and B lymphocytes. The chances of pulp necrosis may be enhanced when the accumulation of PMNs is profuse.

Protection of the pulp–dentine complex is, therefore dependent on coverage of the exposed dentine using restorative materials. Such coverage may simply aim to provide a protective layer or simultaneously replace the missing tissue, restoring form, function, aesthetics and speech. The complexity and invasiveness of the restorative procedures may in turn also induce further damage to the pulp, but this is seen as a necessary calculated risk in order to afford the final protection, just as it is in any elective surgery. It is, however, important to appreciate the damaging effect of restorative procedures. A key initial problem is the manner by which the material is attached to the tooth structure; whether this involves mechanical or chemical retention, each has its advantages and disadvantages.

The relative importance of the different factors causing pulp injury, when restorative procedures are employed, has been debated at length and the emphasis has changed from one set of factors to another. In the 1950s and 1960s, the effect of restorative procedures and toxic restorative materials (silicate and zinc phosphate restorative materials) was uppermost in the minds of researchers. Controlled animal and human histological studies at the end of the 1960s and early 1970s revealed that pulp injury caused by restorative procedures and “toxic” restorative materials was reversible provided that microbial leakage at the interface between restorative material and dentine was controlled. Even exposed pulps dressed with such materials healed over time, provided that persistent injury, due to microbial microleakage was eliminated, which in these studies, was often achieved with a barrier of zinc oxide/eugenol cement. There is evidence, however, that resin particles propelled into the pulp may induce a foreign body response. They may also interfere with the immune defence of the pulp and weaken its potential to defend against bacterial challenge.

Current understanding of the complex interplay between size of cavity, remaining dentine thickness (see Figs 2.6, 2.7), restorative material, microbial leakage and pulp inflammation, remains hazy, but a large part may be attributed to the presence of bacteria in the cavity (Qvist et al., 1989). The degree of injury to the pulp and its ability to survive is dictated in large part by the amount of remaining dentine, viable odontoblasts, and integrity of the neuroinflammatory and immune responses. It is important to preserve as much dentine as possible as it provides a natural buffer to further injury. Cutting deeper cavities or crown preparations increases the number of dentinal tubules involved, reduces the survival of odontoblasts and increases the degree of pulp inflammation and migration of PMNs into the tubules (Fig. 2.8). The injury to the pulp is probably due to a combination of direct injury to odontoblasts (Fig. 2.9) and the pulp by dehydration, heat generation (Fig. 2.10), and microbial and chemical factors reaching the pulp (Fig. 2.11). Heat generation may be influenced by bur type (diamond or tungsten, large or small), rotation speed (type of hand-piece), duration and nature of bur contact (intermittent or continuous, high or low interfacial pressure, bur stalling), cutting technique (slot versus surface removal), vibration and adequacy of coolant spray. Although it is difficult to quantify the threshold of dentine thickness critical to pulp survival, less than 0.25 mm results in severe inflammation. Additionally, teeth with cavities contaminated by microbial leakage have even more severe pulp inflammation. 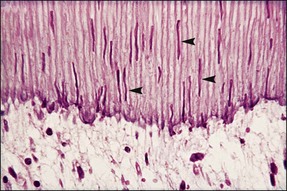 Fig. 2.8 Migration of PMNs into the tubules as a result of injury 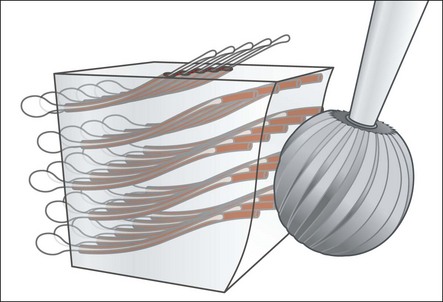 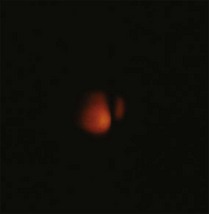 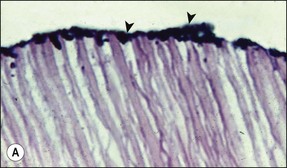 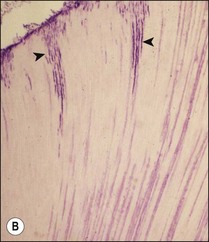 Fig. 2.11 Bacteria (a) lining the surface of cut dentine (high-power view), (b) in dentinal tubules