Malocclusion may be defined as a significant deviation from what has been described as normal or ‘ideal’ occlusion.1 Many components are involved in the development of the occlusion. The most important are:

The study of twins has provided much useful information concerning the role of heredity and the environment in malocclusion. The method is based on the underlying principle that observed differences within a pair of monozygotic twins (whose genotype is identical) are due to environment and that differences within a pair of dizygotic twins (who share 50% of their total gene complement) are due to both environment and genotype. In this chapter we will investigate the environmental and genetic factors that play a part in contributing to commonly observed malocclusion traits.

Class I malocclusions are those that do not have an anteroposterior skeletal discrepancy and accounts for approximately 50% of all presenting malocclusions, but within this there may be vertical skeletal variation. The overall pattern of craniofacial development (short or long face) is established early and on average does not change with age. It is also acknowledged that facial maturity develops in females between 10 and 13 years and 2 years later for males. A number of studies2–5 have shown high genetic determination for total anterior facial height and for its lower component. Overall, vertical variables were found to have higher heritability than horizontal variables. Malocclusions are sometimes referred to as ‘high angle’ or ‘low angle’ malocclusions, which reflects the vertical skeletal and growth rotation patterns – a backward growth rotation being associated with an increased vertical dimension of the lower face (Figure 3.1), and a forward growth rotation associated with a reduced lower face height (often expressed in Class II division 2 malocclusion – see below). 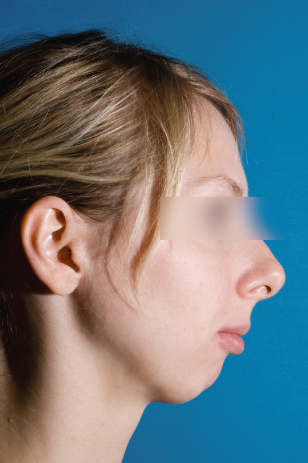 Environmental factors such as lips, tongue and cheeks, muscle activity and certain functions (e.g. breathing and mastication) play an important part in occlusal development6 and mouth breathing is an example of an environmental factor that alters the balance of muscle forces, producing a more vertical growth pattern and a narrow, V-shaped maxillary arch form with a deep palatal vault.7 In circumstances where the lip morphology is unfavourable and lips are incompetent, the manifestation may be vertical maxillary excess with a ‘gummy smile’.

An endogenous tongue thrust is a rare and still disputed phenomenon which is reserved for a persistent tongue thrust accompanied by an anterior open bite and associated circumoral muscle activity on swallowing. This is to be distinguished from the much more common forward tongue posture seen in incomplete overbites (Figure 3.2), particularly when there is a lower ‘lip trap’ in a Class II division 1 malocclusion (see below). 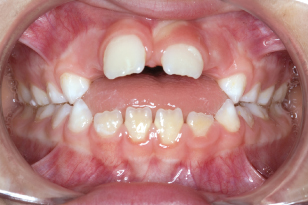 Crossbites can be buccal or lingual, unilateral or bilateral and with or without associated mandibular displacement. In terms of aetiology, genetic influences such as anteroposterior skeletal pattern and environmental influences such as digit sucking habits or mouth breathing may contribute. Crossbites in the absence of significant skeletal discrepancy are a good illustration of the environmental influence of lips, cheeks and tongue on the maxillary and mandibular arch widths and the equilibrium theory. Equilibrium theory proposes that the dentoalveolar portions of the jaws are in a neutral zone where the soft tissue forces of lips and tongue are in buccolingual balance.8 This balance is upset by both digit sucking and mouth breathing, with the low tongue position and simultaneously increased buccal pressure on the maxillary arch from the cheeks resulting in maxillary narrowing and a broader lower arch. In unilateral crossbite with mandibular displacement, the maxillary narrowing is usually bilaterally symmetrical, and it is the mandibular deviation that creates the unilateral crossbite.

Crowding can be categorised into three distinctively different types according to aetiology. Primary crowding refers to tooth size and arch size discrepancy, with this ratio being more often increased (causing crowding) than reduced (which results in spacing), and this is genetically determined. Secondary crowding is caused by premature loss of primary molars, which is environmental in origin (Figure 3.3), while tertiary or ‘late lower incisor crowding’ is a phenomenon that has both genetic and environmental contributions, the main determinant being differential jaw growth.

Figure 3.3 Secondary crowding in the lower arch following the early loss of primary molars. Note the crowding localised to the premolar region. 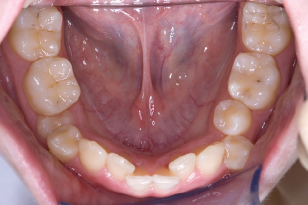 Hypodontia and Other Familial Dental Disturbances

Genes affecting early tooth development (e.g. PAX9 and MSX1) are associated with familial hypodontia.9 For example, patients with PAX9 mutations typically lack at least six or more molars, but there is considerable intrafamilial variability in the particular teeth missing among affected members of such families. Genes expressed by odontoblasts (COL1A1, COL1A2 and DSPP), and ameloblasts (AMELX, ENAM, MMP20 and KLK4) during the crown formation stage, are associated with dentinogenesis imperfecta, dentin dysplasia and amelogenesis imperfecta. Late genes expressed during root formation (ALPL and DLX3) are associated with agenesis of den/>