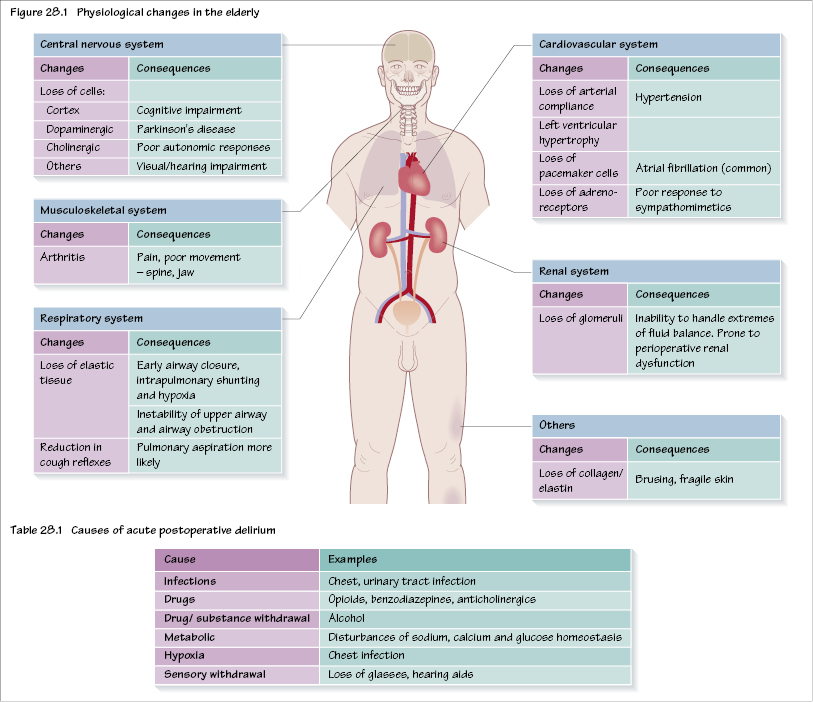 Projected demographic changes in the UK will result in an increase in the overall population, with the group over 75 years old growing fastest. Over the next 25 years this age group is projected to increase by 75%.

Anaesthesia for the elderly presents a challenge due to the decline in physiological reserves. For many physiological systems this reduction, and indeed loss of reserve, may not be apparent. Although there is recognition that biological age rather than chronological age is probably more relevant, there are nevertheless a number of changes that take place during the ageing process; in particular, cell loss (including loss of elastic tissue) and progression of common diseases (such as ischaemic heart disease and arthritis).

The impact of some of these changes is shown in Figure 28.1. Undertaking preoperative assessment is similar for all adults, but testing of physiological reserve is not always easy. For example, exercise tolerance may not be limited by cardiorespiratory reserve but by other factors such as arthritis. All patients should have serum electrolytes, glucose and a full blood count and an ECG. Further tests are as dictated by the patient’s clinical findings and/or severity of surgery (e.g. major vascular surgery) but may include echocardiography, pharmacological stress testing, cardiopulmonary exercise testing, chest X ray and arterial blood gases. In addition, elderly patients will need a neurological assessment (e.g. the Mini-mental State Examination (MMSE)). This may help in the assessment of the patient’s ability to give consent as well as understanding other processes (e.g. the use of PCA postoperatively).

Another key area is anaesthetic drug handling in the elderly. Changes in both pharmacokinetics and pharmacodynamics can lead to altered responses. Many drugs, such as opioids and i.v. anaesthetics, have a longer duration of action. This, together with a reduction in protein binding, results in a greater free (active) percentage of the drug, which can lead to inadvertent overdose. In addition, the markedly increased arm–brain circulation time may also trap the unwary anaesthetist into giving an excess dose of induction agent or sedative drugs. There is also a reduction in the MAC value of inhalational anaesthetics with increasing age, and so a lower concentration is required. For some drugs (e.g. β agonists) there is a reduced response, which may be important in the treatment of hypotension and during resuscitation.

Tags: Anaesthesia at a Glance
Jan 12, 2015 | Posted by mrzezo in Oral and Maxillofacial Surgery | Comments Off on 28: Anaesthesia and old age
Premium Wordpress Themes by UFO Themes
WordPress theme by UFO themes