Figure 26.1 (A) Examples of open bite: (i) an asymmetrical AOB caused by digit sucking, (ii) a severe symmetrical AOB caused by an increased lower anterior face height and macroglossia and (iii) a severe skeletal AOB extending backwards to produce a posterior open bite. (B) A reverse curve of spee in the lower arch is often an indication that the tongue may play an important part in the aetiology of AOB. (C) A habit-breaking appliance can be cemented onto the maxillary first permanent molars. It acts as a reminder and makes digit sucking less pleasurable. It should be left in situ for a least six months after the habit has stopped. (D) Retroclination of the (i) upper and (ii) lower incisors with fixed appliances can help with anterior open bite closure. 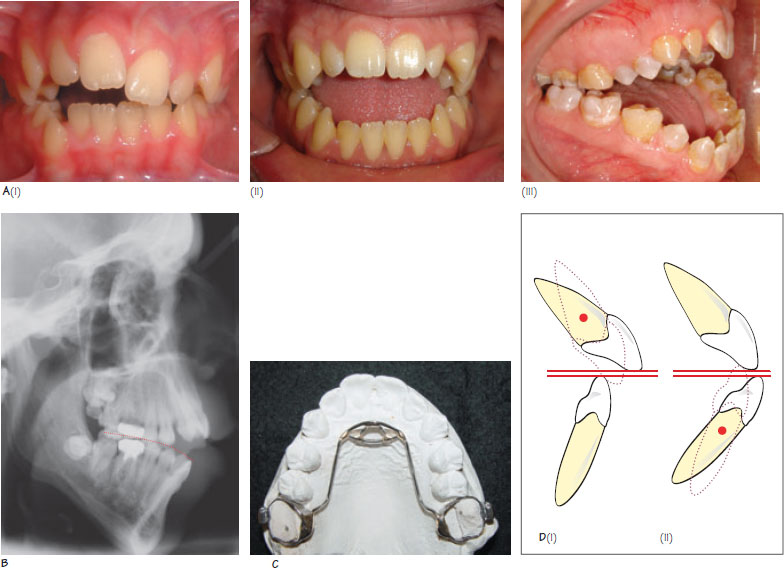 An anterior open bite (AOB) exists when there is no vertical overlap between the maxillary and mandibular incisors with the molars in occlusion (Figure 26.1A). The prevalence of AOB shows ethnic variation with 2–4% of Caucasians and 5–10% of African Caribbeans being affected. AOB can be classified as mild (1–2 mm), moderate (2–4 mm) or severe (>4 mm), and it may extend posteriorly into the molar region to form a posterior open bite. An AOB may also be classified as dental or skeletal, depending on its aetiology, and as symmetrical or asymmetrical depending on its appearance.

Box 26.1 lists the factors that may contribute to the development of AOB.

AOB may be associated with an increased lower anterior face height (LAFH) when the eruptive capacity of the incisors is exceeded. When there is a clockwise (backward) mandibular growth rotation, the chances of AOB development are increased. Diagnostic clues to a significant skeletal aetiology include increased LAFH, increased maxillary– mandibular planes angle and a co-existing posterior open bite. An AOB can occur with a skeletal I, II or III pattern.