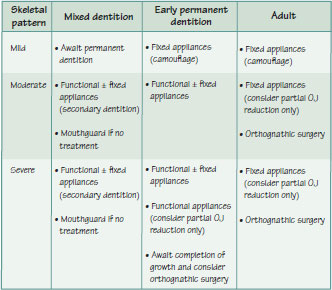 Figure 22.1 (A) Examples of (i) mild, (ii) moderate and (iii) severe Class II skeletal pattern due to mandibular retrognathia. (B) An example of a Class II, division 1 case treated with a functional (twin block) appliance for nine months: (i) start, (ii) end of twin block phase (note the reduction in overjet). (C) Class II, division 1 case treated by upper incisior retraction (orthodontic camouflage) using fixed appliances: (i) before and (ii) after treatment. (D) Case where space was created in the upper arch, for incisor retraction, with the use of headgear: (i) before and (ii) after headgear. 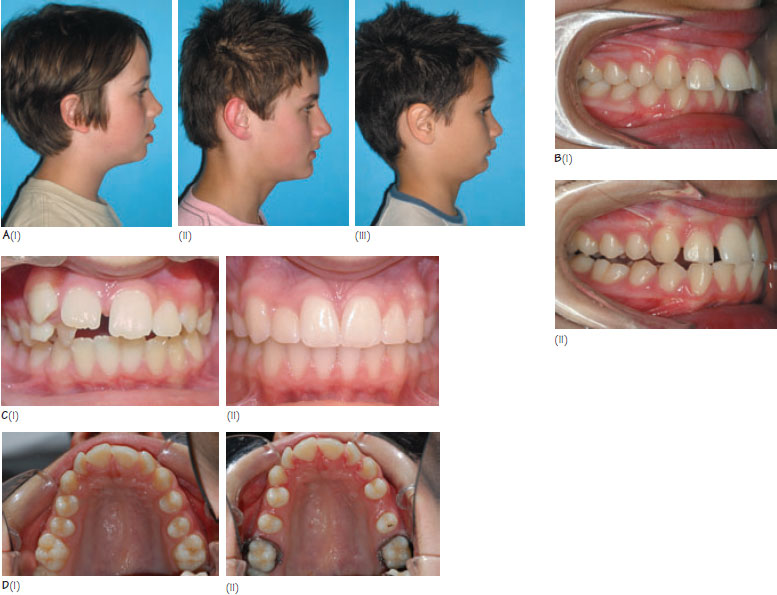 Class II division 1 is the term used to describe a malocclusion in which the lower incisal edges lie posterior to the cingulum plateau of the upper incisors, the overjet (OJ) is increased and the upper incisors are normally inclined or proclined (British Standards Institute incisor classification, see Chapter 10). The molar relationship is often Class II, however, it may be Class I if there has been early loss of a lower deciduous molar and the first molar has drifted forwards. The overbite (OB) is variable but is often deep.

The prevalence of Class II division 1 malocclusion is 15–20% among Caucasians.

Class II division 1 malocclusion is commonly accompanied by a skeletal II pattern with varying degrees of mandibular retrognathia (Figure 22.1A). Rarely, maxillary protrusion may be the primary aetiological factor. The vertical dimension is often normal or increased but can be decreased. If the soft tissues are favourable, the lower incisors are often proclined (dento-alveolar compensation) to compensate for the anteroposterior (AP) skeletal discrepancy (Figure 8.1A).

The presence of incompetent lips, with failure of the lower lip to control the position of the upper incisors, can be an important aetiological factor. The lips may be incompetent due to many reasons (Figure 15.1E). An adaptive oral seal is formed which may further influence incisor position. Lip to lip contact maybe possible by habitual forward posturing of the mandible and/or increased circumoral muscular activity. This helps in controlling the position of the upper incisors which may appear normally inclined. If there is a lip to palate anterior seal (termed a lower lip trap, Figure 8.1E), the soft tissues encourage upper incisor proclination and limit lower incisor proclination. Where the tongue contacts the lower lip to produce an anterior oral seal, the lower inc/>