It has long been stated that “beauty is in the eye of the beholder.”1 However, specific facial features are universally associated with attractiveness. Three components in facial esthetics that have been investigated through research in evolutionary psychology and that appear to represent cues for mate selection are symmetry, averageness, and secondary sexual characteristics.2 Cultural, social, and racial influences may affect one’s judgment of attractiveness but they are secondary to these primary three characteristics.3,4

As with the other bilateral structures in the human body, symmetry in facial esthetics is evaluated in a right to left relationship. A slight asymmetry between the two facial halves is the norm; however, large asymmetries have been attributed in evolutionary psychology to signal lack of health and poor genetic makeup.2 Averageness, also referred to as prototype, is based on the concept that a computer-generated composite of select features from a group of many individuals will yield better esthetics than any single individual who is part of that group.5 In treatment planning in orthognathic surgery and orthodontics, the averageness concept is applied when any patient with a dentofacial deformity or malocclusion is compared to a norm. Through the use of cephalometrics, which examines the deviation in magnitude of specific dentofacial angles, lengths, and proportions, the patient is compared to individuals of the same age, gender, and ethnic group. Finally, secondary sexual characteristics are those that distinguish or define both sexes. A specific example is chin prominence in males and high cheekbones and short lower facial height in females.4,6

Symmetry, proportionality, and averageness are achievable goals in orthognathic surgery and serve as fundamental concepts that guide the treatment planning process in patients with dentofacial deformities. The esthetic outcomes obtained by following these goals likely result in an improvement in facial esthetics and appearance. Although facial esthetics is significantly affected with orthognathic surgery, other important functional aspects are also improved. Murphy et al.7 evaluated the quality of life of patients who had undergone orthognathic surgery and found moderate to high improvement in facial appearance (93%), masticatory function (64%), comfort (60%), and speech (32%).

The treatment plan for patients with dentofacial anomalies must include specific goals, which can be divided into objective goals and subjective goals. Objective goals are those that can be measured exactly and, in general, are related to symmetry. It is clear that symmetry is measurable and has been regarded as one of the most important parameters in assessing facial esthetics.2–4 In orthognathic surgery planning, symmetry is mostly related to the transverse dimension; however, it can also be assessed in the vertical dimension (e.g., maxillary cant and ramus height differences). Objectives in the anteroposterior are more subjective, as they relate to averageness. The objectives in the vertical dimension are based on proportions and averageness and goals in this dimension are also prone to subjectivity (Fig. 21-1). Although the transverse dimension is mostly dictated by symmetry, averageness provided by normative values of different dental and skeletal dimensions could affect the surgical plan and therefore should also be included as a subjective goal. 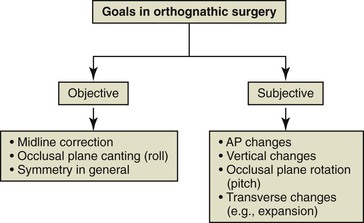 Both objective and subjective goals guide the planning of orthognathic surgery. However, significant subjectivity influences the surgical plan. Although most surgeons and clinicians use cephalometrics as the basis for treatment planning for orthognathic surgery, disagreement can be common due to different clinicians’ preferences as to what will constitute an ideal outcome. This is especially the case when patients and surgeons who have different ethnic backgrounds are considered. Lee et al.8 showed that there were discrepancies between American-trained and Asian-trained oral and maxillofacial surgeons regarding the type of treatment recommended for a group of Asian women with skeletal Class III profiles. While all of the Asian-trained surgeons preferred mandibular setback, approximately 40% of the American-trained surgeons preferred maxillary advancement.

During an orthognathic surgery case planning session it is not uncommon to encounter long discussions on the surgical movements that should be performed. Many complex questions can arise: How much should the maxilla be advanced (i.e., 3- or 5-mm)? Should the procedure include one or both jaws (especially in Class III malocclusions)? Is a genioplasty necessary? These questions arise because clinicians’ preferences and biases affect these treatment decisions. Some clinicians prefer that the maxilla or mandible be projected more, or in some instances less, or that the incisor display at rest be a few millimeters more or less compared to other clinicians. This problem of disagreement is more relevant to the anteroposterior and vertical dimensions. However, such discrepancies are not present when symmetry is considered. This is why most clinicians and surgeons would consider a surgical plan with the maxillary midline off by 2-mm or more, a significant maxillary cant, or significant chin point deviation to be completely unacceptable.

To meet the objective goals, new technology consisting of very precise three-dimensional (3D) planning software allows the virtual visualization of the craniofacial anatomy and aids in the surgical planning of patients with dentofacial deformities.9–11 This 3D planning software is very important in the clinician’s ability to quantify with high precision the degree of asymmetry and plan with great detail the surgical movements. When planning occurs in three dimensions, aviation concepts become handy in describing the orientation and planning the surgical movement of a craniofacial structure within an orthogonal coordinate system. Rotational movements (pitch, yaw, and roll) along the three axes (x, y, and z) supplement the traditional two-dimensional movements along the different planes (sagittal, coronal, and axial) (Fig. 21-2).12 In essence, this 3D planning software allows visualization of the deformity and planning of the surgical movements in a virtual environment with six degrees of freedom. 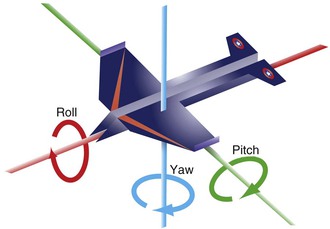 Figure 21-2 Concepts of roll, yaw, and pitch used in aviation and extrapolated to the planning of surgical movements in the three dimensions of space in orthognathic surgery. 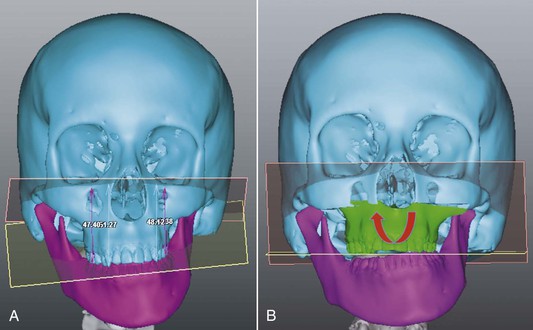 Figure 21-5 Roll, or rotational movements of the maxilla or the mandible around an anteroposterior axis or z axis to correct asymmetries in a vertical direction A, Significant occlusal cant evaluated in the coronal plane. B, Virtual osteotomy correcting the deformity by addressing the roll deviation. 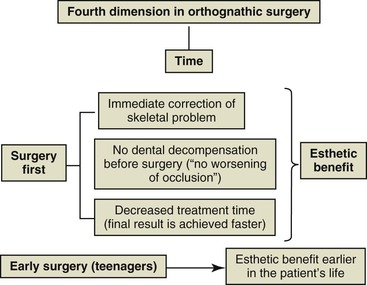 Figure 21-6 Time as the fourth dimension in orthognathic surgery.

The other aspect related to time is the age at which orthognathic surgery is performed, or surgical timing. Traditionally, orthognathic surgery was performed once maxillary and mandibular growth was complete. However, we can positively affect patients who have significant dentoalveolar deformities by performing early surgery (during adolescence). This allows for favorable facial change during a key stage of life in which the psychosocial aspect has great influence (see Fig. 21-6). In fact, early surgery or surgery during growth has been described by Wolford et al.15,16 as a viable option in different types of orthognathic surgical approaches if certain surgical considerations are followed.

Although this concept lays a good foundation for a classification system for facial esthetics, macroesthetics should include not only deviations from the norm of the face but also problems that affect the smile. In this line of thinking, macroesthetics is defined as the dentofacial problems that are usually identifiable by a layperson, orthodontist, or surgeon (Fig. 21-7). These problems include moderate to severe Class II or Class III skeletal anomalies, marked asymmetries, and vertical problems. The facial soft tissues would logically include labial or facial fissures and other visibly apparent anomalies that compromise facial esthetics. Intraorally, macroesthetics includes crowding, tooth malposition, missing teeth or teeth in poor condition (teeth with fractures, excessive wear, or discoloration), or severe gingival recession in the esthetic zone. The chief complaint also influences how to classify a problem in the macroesthetic, miniesthetic, and microesthetic categories. 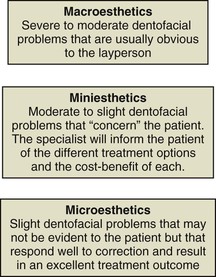 Miniesthetics refers to slight to moderate facial or dental problems that are not so obvious that they can be pinpointed by the patient but that drive the patient to consult a clinician for an improvement in his or her smile. For example, patients consult for problems in the vertical dimension, such as slight or moderate gingival smile or slight to moderate skeletal Class II or Class III with dental compensations. Dentally, miniesthetics refers to tooth malposition, discoloration, diastemas or gingival recession, and other features that are not overtly evident.

Microesthetics refers to slight deviations from the norm that the patient has not identified but, if corrected, will enhance the smile esthetics. These details are what define the difference between a good result and an excellent one. Microesthetics would correspond to the correction of slight tooth malposition in the anterior esthetic zone, gingival recession or uneven gingival margins of more than 1-mm, and excessive tooth discoloration.

The following four cases illustrate the concepts of treatment planning; time as the fourth dimension; and macroesthetics, miniesthetics, and microesthetics in orthognathic surgery.

Figure 21-8 depicts the change in the facial profile and occlusion in a 17-year-old patient with a severe skeletal Class III malocclusion from pre-treatment (see Fig. 21-8, A) to 6 weeks after appliance insertion (see Fig. 21-8, B) to post-treatment after 8 months (see Fig. 21-8, C), when the orthodontic-surgical treatment was finished. The facial profile as well as the occlusion and dental appearance were clearly compromised in the initial photographs, which affected the macroesthetics. The patient had a maxillary advancement and mandibular setback with the benefits of the “surgery first approach,” namely (1) no dental decompensations prior to surgery, thereby preventing facial profile deterioration; (2) an immediate facial change after the patient decided to undergo surgery; and (3) completion of orthodontic-surgical treatment 8 months after surgery. Again, this illustrates a very short period of treatment compared to a conventional three-stage approach with presurgical orthodontics, orthognathic surgery, and postsurgical orthodontics treatment.

Figure 21-8 A, Profile maxillomandibular relationship revealing a severe Class III skeletal dentofacial deformity at pre-treatment. B, Correction of the skeletal and dental aspects with a “surgery first approach” (6 weeks after surgery). C, Final profile and occlusal outcome after 8 months of treatment.

The anteroposterior and vertical position/>