The historical development of intravenous (IV) anesthesia and sedation is reviewed in this chapter. Although the impact made by the development of the IV route of drug administration was not quite as dramatic as was that of inhalation anesthesia (see Chapter 11), the ability to administer medications directly into the cardiovascular system proved to be a boon to the medical and dental professions.

As was true with inhalation anesthetics, it seems as though some of the techniques and drugs had been available for many years before the thought occurred to put them to any therapeutic use. Indeed, with the IV route, it was not until well after the development of inhalation anesthesia that the administration of drugs directly into the cardiovascular system of a human being occurred.

William Harvey1 (1578-1657) (Figure 20-1) provided much of the groundwork for the future of IV medication with the publication of the results of experiments on the circulation of blood. Harvey stated that there was a continuous circulation of blood within a closed system. Before Harvey’s findings, a multitude of theories relating to the flow of blood in the human body abounded. Most of these suggested that blood flowed to tissues within the body in an open system. Harvey was born in England and received his medical training at Oxford University. Following graduation he went to Padua, Italy, then the leading medical center in the world, where he began to formalize his theories on the circulation of blood. Andrea Cesalpino (1519-1603) was an important predecessor of Harvey. Cesalpino was the first person to use the word circulation in reference to blood and its travels throughout the body.2 Cesalpino was also first to propose that capillaries connect arteries and veins, meaning that there is no free flow of blood into the tissues of the body as had been assumed for many years. The one major drawback to Cesalpino’s theory was his proposal that there were direct connections between major arteries and veins. 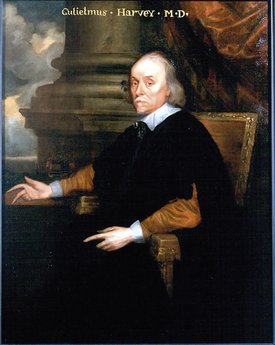 On returning to England in 1602, Harvey entered into private medical practice and prospered. He became the court physician for King James I and for King Charles I. Despite his busy practice, Harvey continued to experiment; most of his research involved the circulation of blood. As early as 1615, Harvey spoke of the circulation of blood within a closed system; however, it was not until 1628 that he published one of the most important textbooks in the history of medicine and biology: Exercitatio Anatomica de Motu Cordis et Sanguinis in Animalibus (On the Movement of the Heart and Blood in Animals).1

Harvey demonstrated for the first time that because of the presence of valves within the heart and veins, blood flow within the circulatory system was unidirectional. In addition, he discussed capillaries, microscopic vessels that connect smaller arteries and smaller veins, thus providing a closed circulatory system. Despite his description of capillaries, Harvey was never able to see them; it was not until after his death that Marcello Malpighi (1628-1694) first saw capillaries through the microscope.

Harvey’s book produced great controversy because it attempted to disprove theories relating to blood flow that had been held for many years. Controversy over Harvey’s book raged for approximately 20 years after its publication. Today, Harvey’s work is considered the seventeenth century’s most significant achievement in physiology and medicine.

As a logical extension of Harvey’s work, the first IV administration of a drug occurred in the same century (1657). Sir Christopher Wren and Robert Boyle administered tincture of opium intravenously into a dog by using a sharpened quill to which a bladder had been attached.3 Eight years later, Richard Lower successfully transfused blood from one animal to another.

The late 1700s and early 1800s saw the development of anesthesiology, with the advent of ether, chloroform, and nitrous oxide-oxygen (N2O-O2). This history is chronicled in Chapter 11.

In 1839 in New York, Isaac E. Taylor and James Augustus Washington administered a solution of morphine in an Anel syringe.4 />