Anchorage has long been one of the greatest problems in the field of orthodontics because teeth, even molars, move in response to orthodontic forces. Therefore, in maximal anchorage cases, patients have needed to wear headgear. Thus reinforced anchorage with extraoral appliances has severe limitations because it requires excellent patient compliance.

In the intermaxillary fixation after jaw surgery, maxillofacial surgeons have also found that teeth do not make reliable anchor units. To solve this problem, surgeons proposed “skeletal anchorage” as an adjunct to tooth-borne anchorage. The maxillary teeth and bone were fixed with wires from the anterior nasal spine (ANS), infraorbital rim, or zygomatic arch. The mandibular teeth were anchored to the mandible with wires that circled the mandibular body in the anterior and posterior regions.

In 1983 Creekmore and Eklund1 reported a severe deep bite case that was successfully treated with a surgical vitallium bone screw inserted just below the ANS to intrude the upper incisors. This was the first clinical report of “skeletal anchorage” for orthodontic tooth movement. A second case was reported by Jenner and Fitzpatrick2 in 1985. They applied a large bone plate in the ramus to tip the mandibular molar distally with a leading wire and elastics.

Our research group noted that the osteosynthesis titanium mini-plate had been thoroughly evaluated as an excellent biocompatible material in the field of maxillofacial surgery. In 1992 we developed the skeletal anchorage system (SAS) using titanium mini-plates3 and, since then, SAS mechanics have been applied to various types of malocclusions in daily orthodontic practice.

The advantages and disadvantages of the SAS are listed in Boxes 20-1 and 20-2.

Anchor plates are made of pure titanium, making them very stable and safe.

Anchor plates do not disturb any kind of tooth movement because they are placed outside the dentition. This is the most distinctive feature of the SAS in comparison with the other implant systems currently being used in orthodontics.

Molars can be moved as easily as teeth in the anterior dentition can be moved. It is now possible to easily control the occlusal plane and even the level of this plane.

Patients are no longer required to wear uncomfortable extraoral appliances (i.e., the SAS can function like an invisible headgear).

Patient compliance is not necessary, except with regard to oral hygiene.

Orthodontic therapy based on treatment goals can go ahead with a very predictable outcome.

The quality of orthodontic treatment is raised with the SAS.

The number of nonextraction cases can be significantly increased.

The number of orthognathic surgery cases can be significantly decreased.

Infection can be associated with anchor plate implantation. Better methods need to be established to prevent infection.

There are limitations to the shapes and sizes of the anchor plates.

SAS treatment is a symptomatic, not a causative, treatment and therefore long-term evaluation is the only way to confirm its effectiveness.

Guidelines for the differential diagnosis of the indications for SAS treatment must be established.

SAS mechanics has yet to become an established technique. The mechanics need to be continually refined and improved.

This chapter outlines the SAS and describes a typical case in which the patient was treated with the application of SAS.

Because osteosynthesis titanium mini-plates were not designed as orthodontic anchor plates and are not necessarily suitable for orthodontic treatment, they were noted to have the following shortcomings:

• The shape of the mini-plate is not suitable for the application of orthodontic force.

• The surface of the arm portion that penetrates the mucoperiosteum is roughly sandblasted and difficult to clean.

• The size of the mini-plate is relatively thick and large.

To solve those problems, our research group developed the new orthodontic anchor plates.4

Figure 20-1 shows the newly developed anchor plates, which are called SMAP (Super Mini Anchor Plate®, Dentsply-Sankin, Tokyo, Japan). These plates are made of pure titanium, which is suitable for osseointegration and also tissue integration. In addition, Class II pure titanium is used, which is strong enough to withstand the usual orthodontic forces but can also be bent with ease for fitting into the bone contour of the implantation site.

Figure 20-2 shows an example of the T-type anchor plate. The anchor plate consists of three portions: head, arm, and body. The head portion is intraorally exposed and positioned outside the dentition so that it never disturbs any kind of tooth movement. Each head portion has three continuous hooks for easier application of orthodontic forces. As the need arises, it is possible to cut off the first and second hooks. There are two types of head portion, which differ with regard to the direction of hooks, and which type is used depends on the manner of tooth movement. 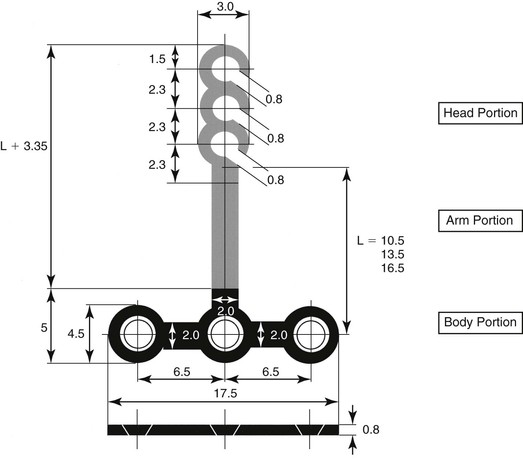 The arm portion is transmucosal and has three graduated lengths—short (10.5-mm), medium (13.5-mm), and long (16.5-mm)—to compensate for individual morphological differences and to accommodate the manner of tooth movement (Fig. 20-3). 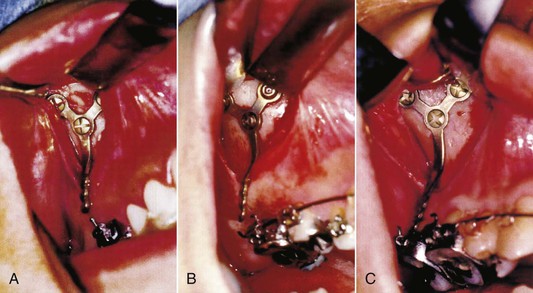 The body portion is positioned subperiosteally. There are three basic types: T, Y, and I. The T-type plates are frequently used as L-type plates by cutting off one of the circles. The variations in shape mean that the surgeon can select the most appropriate anchor plate according to the bone contour of the implantation site.

In addition, the surface attached to the bone is sandblasted (Fig. 20-4) so that it is osseointegrated more readily. The other surfaces are polished with a mirrorlike surface so that they safely penetrate soft tissue and are effective in plaque control for preventing infection. 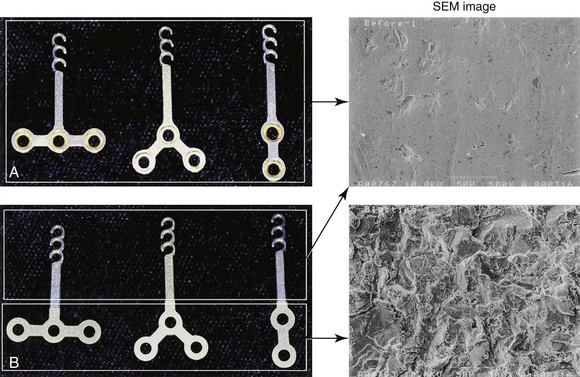 The implantation site for the anchor plate must have sufficient depth of cortical bone (at least 2- to 3-mm) to allow it to be fixed with monocortical mini-screws. The screws are also made of pure titanium. Each screw has a head with a tapered inside square and self-tapping thread. The diameter of the screw is 2-mm and the available lengths are 5- and 7-mm. If the screw becomes loose or bent, an emergency screw with a diameter of 2.2-mm is used. 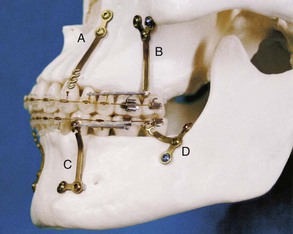 The T- and L-type plates are usually placed with titanium mini-screws in the mandibular body to intrude, protract, and distalize the lower molars or at the anterior border of the mandibular ramus to distalize the molars and tract the impacted second molars. The bone thickness of the lateral cortex in the mandible is sufficient to secure titanium screws at any point except around the foramen mentalis.

The surgery is carried out under local anesthesia admin­istered with intravenous sedation. First, a mucoperiosteal incision is made at the buccal vestibular of the implantation site. A vertical />