Sleep is a universal necessity of humans, and approximately one-third of the human life is spent in the sleep state. Disruption and/or depravation of sleep typically results in adverse physiologic effects.

Despite large amounts of research and investigation into the true definition of sleep, the complete purpose for sleep is not fully understood. It is known, though, that adequate sleep is needed to maintain alertness, heal the body, and assist with memory and learning. Also, the physiologic and neurochemical activities needed for the sleep and awake states are better understood. However, the complexity and study of sleep require a comprehensive understanding of the physiology, neuroanatomy, neurochemistry, and associated mechanisms by which these areas interact.

Normal sleep can be viewed from two aspects: (1) the actual distribution of sleep cycles relative to nonrapid eye movement (NREM) and rapid eye movement (REM), and (2) the neurotransmitters that affect regulation of the sleep–wake cycle. Each of these areas changes as the human progresses from infancy to elderly.

Structural characteristics of normal sleep can be referred to as sleep architecture, which comprises two distinct states: NREM, which is subdivided into Stages 1–4; and REM.1, 2 NREM and REM sleep occur in varying proportions during a sleep period, and they also alternate in a cyclical fashion with each other throughout sleep. In addition, their proportional distribution during sleep changes with age.

The typical pattern in normal sleep is for the individual to progress from wakefulness to the NREM sleep state, followed by the REM sleep state, and then cyclically alternating between REM and NREM stages. Overall, a night of sleep comprises about 75–80% of NREM sleep and 20–25% of REM sleep. When this cycling becomes irregular and/or there is a deprivation of NREM sleep stages, such as what occurs with narcolepsy, sleep disorders can develop.

Muscle activity during sleep also varies depending on REM or NREM sleep. In REM sleep, there appears to be an increase in activity in the motor centers of the brain, but there is active inhibition that is exerted on these motor neurons.

In NREM sleep, muscle activity is decreased with the maximum effect during the more restorative Stages 3 and 4.

NREM sleep has historically been subdivided into four distinct stages on the basis of characteristic brain wave and physiologic activities ever since it was initially observed and measured through electroencephalography (EEG): NREM Stage 1, NREM Stage 2, NREM Stage 3, and NREM Stage 4 (Figure 2.1).3, 4

These four stages of NREM sleep are typically defined as follows:

Stage 1: This stage reflects a change in brain wave activity from rhythmic alpha waves to mixed-frequency waves as the individual passes from wakefulness to the initiation of sleep. NREM Stage 1 comprises about 2–5% of the total sleep time, and it is considered to be a drowsy or light sleep stage from which one can usually be awakened easily. Sudden muscle contractions can occur in this stage, and the individual may also experience a sensation of falling.

Stage 2: Although this begins to be a deeper stage of sleep with a reduction of heart rate and body temperature, it is still regarded to be light with mixed-frequency EEG activity. He or she can again be easily aroused or awakened, although an additional amount of stimulus is needed as compared to NREM Stage 1. This stage comprises about 45–55% of the total sleep time. Unique and significant features in the EEG activity of this stage are the presence of K-complex and sleep spindles, the latter of which has been postulated to being associated with memory consolidation.5 The K-complex may appear as a result of some type of stimulation, such as noise, or it may appear spontaneously. 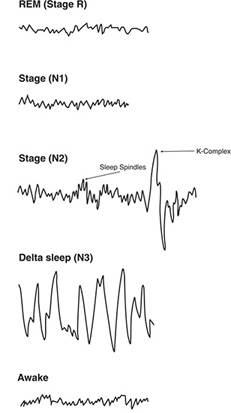 Stages 3 and 4: These two NREM stages have their own unique and individually recognized brain waveforms, but they are usually viewed as one stage of sleep, being referred to as slow-wave sleep, deep sleep, or restorative sleep. Because of their unique EEG waveform, they are also known as delta sleep. Together, they comprise about 13–23% of the total sleep time. NREM Stage 4 reflects the highest threshold for awakening from sleep relative to the other NREM stages.

REM sleep is also referred to as dream sleep. Although it comprises about 20–25% of the total sleep time, this state recurs several times throughout the overall cyclical activity of NREM and REM states during a sleep period. In normal sleep, each subsequent recurring REM period is longer than the prior REM period.

EEG activity is increased with a characteristic “sawtooth” waveform and can also appear similar to wakefulness relative to mixed frequency. There is a concomitant increase in heart rate, respiration, blood pressure, and jerky eye movements. During this state of increased cerebral activity, there may be an immobility or paralysis of the muscles in the limbs, which has been thought to be a preventive mechanism of the individual to not physically act out their dreams during sleep.6 REM sleep may also be contributory to memory consolidation.7, 8

REM sleep may be further regarded as two phases: tonic and phasic.9 However, a typical sleep study report will not make a distinction between these two phases.

Tonic REM is a unique phase by virtue of the following characteristics:

Phasic REM is also unique because it occurs sporadically instead of continuously, and it reflects the following characteristics:

In 2007, a new method of scoring sleep studies led to a revision in sleep staging,10 and sleep study reports may increasingly refer to this nomenclature as opposed to the staging that has been historically utilized in the past (Table 2.1):

Cycles and hours of sleep

Sleep patterns and architecture change for individuals throughout life. From infancy to elderly, these changes are dynamic and distinct, relative to sleep initiation, sleep maintenance, and the amount of time for each sleep stage.11, 12

During normal sleep, the human typically cycles through the NREM and REM sleep stages four to six times per sleep period. In the adult, regardless of the age, these stages occur at about 90-minute intervals. In children, these stages are shorter and occur at about 50- to 60-minute intervals. In addition, children have different proportions of REM and NREM sleep as well as different numbers of hours of sleep. A newborn typically sleeps 16–18 hours, and 50% of this sleep time is REM sleep. Slow-wave sleep (NREM Stages 3 and 4) is at its maximum in young children since this is when growth hormone is secreted.

As we age, slow-wave sleep decreases, which appears to begin after adolescence. After the age of 70, slow-wave sleep is minimal or, in some cases, nonexistent. In addition, the elderly spend more time in bed and less time actively sleeping (Figures 2.2 and 2.3).

As people become elderly, they often begin to adjust the time that they go to bed to an earlier and earlier hour.13 The result is that they have the increased potential to wake up earlier in the morning, which is a condition termed advanced sleep phase syndrome.14 In this syndrome, the individual is purposely adjusting the sleep–wake schedule by attempting to initiate sleep in advance of the circadian rhythm. As such, the intentional adjustment is not synchronized with this internal biological rhythm.15

With the aging process, the typical sleep architecture becomes more fragmented with increased awakenings or arousals during the sleep period16 and people tend to subsequently have an increased risk for sleep disorders,17, 18 including sleep-related breathing disorders (SRBD) and insomnia.19 With SRBD, the musculature that supports the airway becomes more relaxed during sleep, and this lends itself to increased collapsibility. Therefore, as one’s age increases, the potential risk for SRBD is increased. The role of the dentist is significant for the recognition of obstructive sleep apnea (OSA) and for the management of this sleep disorder with oral appliance therapy.

Figure 2.2  Architecture of sleep stages by age groups over a full night at varying hours of sleep for children, young adults, and elderly. (Kales A and Kales JD. Sleep disorders: recent findings in diagnosis and treatment of disturbed sleep. New Eng J Med. 1974; 290:487. Reprinted with permission.)

Figure 2.3 Sleep by decades. It shows the amount of sleep by stages over a lifetime and how these stages tend to change with age. 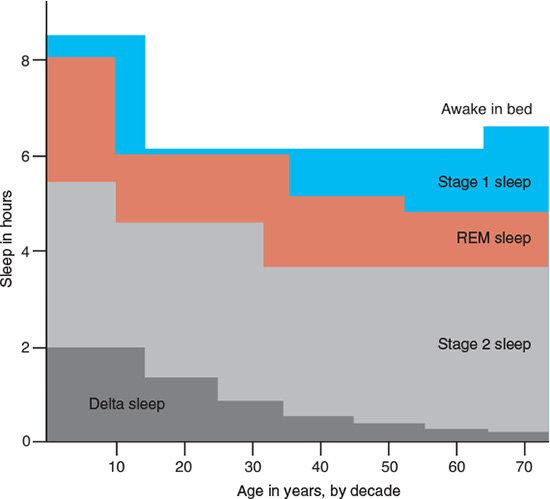 The number of hours of sleep that is considered to be optimal also varies with age. Infants and young children require more sleep time as compared to teenagers and adults (Table 2.2).

Neurotransmitters of wakefulness and sleep

The role of neurotransmitters in both the sleep and awake states is a complex topic. Because of their varying levels and interaction throughout the 24-hour period that impacts their function, many of the neurotransmitters may appear to have contradictory functions by impacting sleep as well as wakefulness.

Table 2.2 Optimal hours of sleep on the basis of age.

Source: Adapted from the National Sleep Foundation. Available at www.NSF.com, 2009.

The basic neurotransmitters pertaining to the awake state are the biogenic amines, also known as monoamines,20 which have the role of either maintaining wakefulness or initiating sleep. These monoamines are further categorized into three subgroups: (1) catecholamines, in particular dopamine (DA), norepinephrine (NE), and epinephrine (adrenalin); (2) serotonin (5HT); and (3) histamine. The monoamines DA, NE, and 5HT along with another neurotransmitter, acetylcholine, have their origin in the brain stem, whereas histamine originates from the hypothalamus.

This neurotransmitter is predominately for vigilance and cortical activation. It is found at the neuromuscular junctions in the sympathetic, parasympathetic, and central nervous systems. Acetylcholine is considered to have excitatory properties, and it also pl/>