2 Anatomy of the trigeminal nerve

Anatomy of the trigeminal nerve

The trigeminal nerve is the fifth cranial nerve (n. V), which plays an important role in the innervation of the head and neck area, together with other cranial and spinal nerves. Knowledge of the nerve’s anatomy is very important for the correct application of local anaesthetics.

The trigeminal nerve contains a large number of sensory (afferent) and motor (efferent) neurons. The sensory fibres carry nerve impulses towards the central nervous system, while the motor fibres carry impulses away from the central nervous system. The trigeminal nerve has a wide innervation area (Figure 2.1). The nerve provides the sensitivity of the dentition, the mucosa of the mouth, nose and paranasal sinuses, and the facial skin. The nerve also contains motor fibres that innervate, among others, the masticatory muscles. Although the trigeminal nerve is the most important nerve for the sensory and motor innervation of the oral system, the facial (n. VII), glossopharyngeal (n. IX), vagus (n. X), accessory (n. XI) and hypoglossal (n. XII) nerves are also of significance. The n. VII, n. IX and n. X, for example, take care of the taste sense, the n. IX and n. X provide the general sensation (pain, touch and temperature) to the pharynx, soft palate and the back of the tongue, whilst the n. XII is responsible for the motor innervation of the tongue. Although these latter nerves do play an important role in innervating the oral cavity, they will only be mentioned marginally in this book. 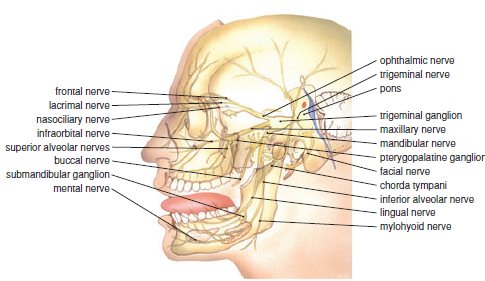 2.2 The central part of the trigeminal nerve

The trigeminal nerve emerges from the middle of the pons, at the lateral surface of the brainstem. The nerve consists of two parts here: the sensory fibres form a thick root and the motor fibres form the much thinner motor root. These two roots run to the front of the petrous part of the temporal bone where the large sensory trigeminal ganglion (semilunar or Gasserian ganglion) lies in a shallow groove surrounded by dura mater.

The trigeminal ganglion is formed by the aggregation of cell bodies of sensory neurons. Three main branches of the trigeminal nerve emerge from the ganglion: the ophthalmic nerve (n. V1), the maxillary nerve (n. V2) and the mandibular nerve (n. V3). The motor root joins the mandibular nerve only, once it has exited the skull via the foramen ovale. The sensory areas covered by the three main branches are generally as follows:

Box 2.1 Receptors
Sensory nerves are capable of picking up impulses from the external world and the body. The ends of the fibres themselves function as receptors or there are special receptors (e.g. taste receptors, muscle spindles). Each receptor type is the most sensitive to one specific sensation. There are, for example, mechano-receptors (reacting to touch and mild pressure), thermo-receptors (reacting to temperature) and nociceptors (reacting to tissue damage). Nociceptors serve pain sensation. There are also so-called proprioceptors. These are mostly found in muscles (muscle spindles and Golgi tendon organs) and in the joint capsules. They supply information on the position of the jaw and the speed and direction of movement. This form of sensation is called proprioceptive sensibility or proprioception. There are a great number of receptors present in the facial skin and lips, in the mucosa of the oral cavity and tongue, in the teeth and the periodontium, and in the masticatory muscles and temporomandibular joint.

The trigeminal ganglion has somatotopy. This means that the neurons in the ganglion are arranged in the same order as the areas that are innervated by the three main branches of the trigeminal nerve. The cell bodies of the ophthalmic nerve are grouped medially in the ganglion, while those of the mandibular nerve are grouped laterally. In the middle of these two groups the cell bodies of the maxillary nerve can be found.

The trigeminal nerve has a sensory and motor nucleus within the brainstem (Figure 2.2). The sensory nucleus lies laterally and most of the sensory neurons of the trigeminal nerve contact (synapse) with the neurons in this nucleus. The nucleus forms a long column that extends from the midbrain to the spinal cord. It consists of (from cranial to caudal) the mesencephalic, the principal and the spinal trigeminal nuclei.

Figure 2.2 The motor and sensory nuclei of the third to twelfth cranial nerve in the brainstem (lateral view). The sensory nuclei are shown in blue, the motor nuclei in red. 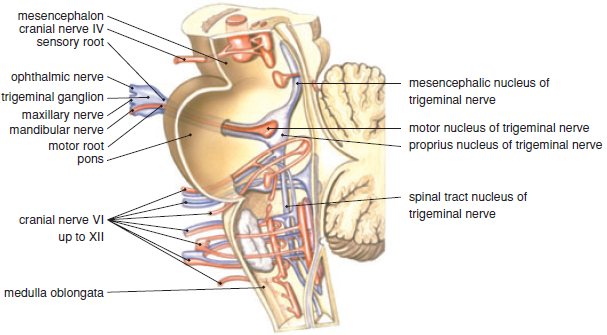 2.3 The peripheral part of the trigeminal nerve

The ophthalmic nerve (n. V1) enters the orbit (Figure 2.3). This nerve carries only sensory fibres and, just before leaving the cranial cavity through the superior orbital fissure, it branches off into three: the nasociliary, frontal and lacrimal nerves. These nerves run in the roof of the orbit and are involved in the sensory innervation of a large number of structures, such as the mucosa of the nasal cavity and the sphenoid and ethmoid sinus, the skin of the nose ridge, the upper eyelid and forehead, and the mucosa that covers the eyeball and inside of the eyelids.

Figure 2.3 The branching of the ophthalmic and maxillary nerves (lateral view).

Tags: Local Anaesthesia in Dentistry
Jan 12, 2015 | Posted by mrzezo in Oral and Maxillofacial Surgery | Comments Off on 2 Anatomy of the trigeminal nerve
Premium Wordpress Themes by UFO Themes
WordPress theme by UFO themes