According to the World Health Organisation pain is defined as an ‘unpleasant sensation that occurs from imminent tissue damage’. From a physiological perspective, pain is a warning system. During dental treatment, patients will experience pain as something unpleasant.

Pain stimuli are primarily generated by the relatively amorph sensory nerve endings of the Aδ and C fibres. These free nerve endings (nociceptors; see Figure 1.1) are sensitive to a variety of mechanical, thermal and chemical stimuli and are therefore called polymodal. Nociceptors do not display adaptation: nociceptive responses will occur as long as the stimulus is present. Nociceptors have a high threshold for activation. The detection of the stimulus is performed by the receptors, present on the sensory nerve endings, that convert the stimulus into an electric signal. This process is called transduction.

Nociceptors are also present in the teeth and the oral cavity and are usually sensitive to a specific neurotransmitter. Most nerve fibres, however, contain various nociceptors. 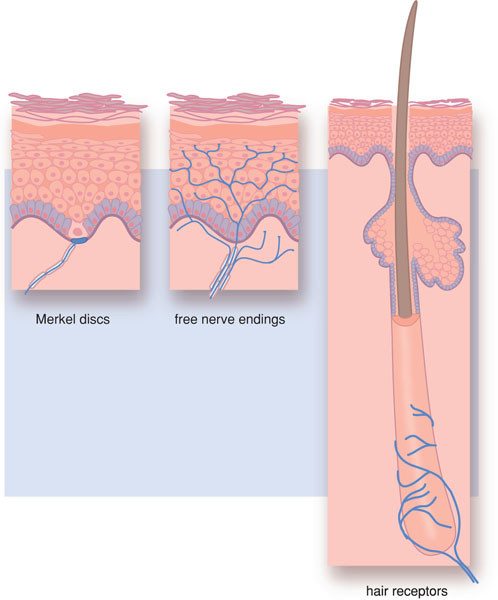 The stimuli, received by the nociceptors and converted into nerve impulses, eventually must be interpreted in the brain. The nerve impulse is transported within the sensory nervous system, wherein three nerve fibres are successively linked. The first nerve fibres form the peripheral nerve. The second and third are present in the central nervous system and form nerve bundles (pathways or tracts). The cell nuclei of the individual neurons are grouped together in ganglia and nuclei.

1.2.1 The structure of the peripheral nerve

Nociceptive stimuli are transported along sensory thinly myelinated Aδ and unmyelinated C fibres. Other types of nerve fibres are involved in the transport of other sensory stimuli (see Box 1.1).

A peripheral nerve is composed of nerve fibres from a group of neurons, enwrapped in a connective tissue network. The individual fibres may, or may not be, surrounded by an isolating myelin layer, Schwann’s sheath. The cell body is the metabolic centre of the neuron (Figure 1.3) where most cell organelles are produced. Dendrites transport impulses towards the cell body and axons transmit signals away from the cell body. Some axons are surrounded by a myelin sheath, others are not. The axons and dendrites are elongated and form the nerve fibres. At the end of the dendrites, receptors are present that can receive signals. At the end of the axons are synapses, where the impulse is transmitted to another nerve cell or to a cell of the end organ.

Box 1.1 Nociceptive pathways
In the body, nociceptive stimuli are received by nociceptors and then propagated via an Aδ or C fibre. The first are thinly myelinated with a fast transmission of stimuli, whereas the second are unmyelinated with a slow transmission.
The C fibres conduct impulses generated by temperature, pain and itching. The Aα fibres conduct motor impulses for the body’s posture and movement; the Aβ fibres transport impulses generated by touch and signals from the skin mechano-receptors; and the Aδ fibres conduct pain impulses, temperature signals and signals to maintain the muscular tone.
The cell bodies of these primary neurons are located in the dorsal root ganglion. The axons run through Lissauer’s tract to the dorsal horn of the spinal cord, where they connect to the secondary sensory neuron in Rexed’s laminae. This secondary sensory neuron crosses the midline and ascends as the spinothalamic tract. The spinothalamic tract forms synapses with nuclei of the thalamus, where it projects onto the somatosensory cortex. Descending pathways from the somatosensory cortex modulate the nociceptive system. From these fibres, the neurotransmitters serotonin and noradrenalin are released. 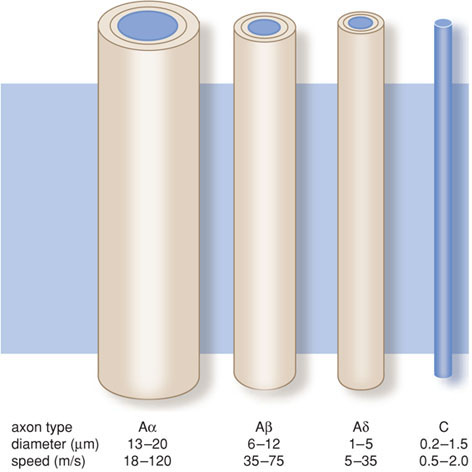 The generation and conduction of impulses in nerve fibres is a complicated process. In order to excite electrical impulses, a change in electrical charge must take place. Cells are surrounded by a semipermeable membrane that is only permeable to water. A selective ion pump actively pumps potassium ions into the cell and sodium ions out of the cell. This results in a concentration gradient of sodium and potassium ions over the membrane. The cell cytoplasm contains a high concentration of negatively charged proteins, which give the cell a negative charge compared with its environment. Extra/>