This chapter describes the effects of pre-prosthetic orthodontic treatment to improve and enhance restorative and prosthetic outcomes in adult patients. Also described is the use of orthodontic biomechanical concepts in patients with acquired defects of the maxilla. Three fixed prosthodontic cases and two maxillofacial prosthodontic cases illustrate the advantages gained through the inclusion of orthodontics in the treatment plan. The need for proper planning and collaborative approach as essential components in proper tooth position for improved prosthetic outcomes is emphasized. Finally, the use of orthodontic principles to preserve teeth in cases where significant oral structures have been removed is also demonstrated.

The orthodontic profession is undergoing a rapid and enormous growing phase with expansion in its approach towards interactive care. The more progressive specialists in our specialty recognize the fact that if treatment with optimal long-term prognoses is to be provided, we should extend collaboration with other dental specialists too, without any hesitation. Except in cases of exodontia, the main purpose of our profession is restoration and maintenance of normal occlusion, which means that all teeth in one jaw occlude with teeth in the opposing jaw, so that the largest area of functional, masticatory surface is provided. There are many areas where orthodontists are in close collaboration with prosthodontic specialists such as prior to replacement of missing teeth, closure/consolidation of spaces for esthetic and periodontal improvement, intrusion or extrusion of certain teeth, correction of axial inclination of teeth, space maintenance and management of impacted teeth. The rationale as well as procedures performed as part of pre-prosthodontic orthodontic treatment is the central theme of this chapter.

The restorative dentist will occasionally be confronted with complex treatment planning decisions resulting from the following (Miller, 1995):

An interactive approach between orthodontists and restorative dentists is deemed necessary for effective management of these problems. While it is not our intention to identify and describe the entire range of indications for the use of pre-prosthodontic orthodontic treatment, the above five points provide examples of the major indicators for this interdisciplinary collaboration.

Dental professionals should always carefully consider tooth position in prosthodontic treatment to determine whether orthodontic treatment can improve prosthodontic treatment outcomes. Optimizing tooth position can improve periodontal health, reduce pathological occlusion, and conserve tooth structure; it also allows the dentist to create restorations that are more stable, functional, and esthetic (Evans and Nathanson, 1979; Spalding and Cohen, 1992; Boyd, 2009). Intrusion, extrusion, correction of tipped teeth, and reduction of crowding or excessive spacing are treatments that an orthodontist can provide. Implants can also be used for orthodontic anchorage to improve treatment outcomes (Goodacre et al., 1997). This chapter will describe several patient treatments where collaboration between orthodontists and prosthodontists was used to improve treatment outcomes. Finally there will also be a section highlighting the use of orthodontic principles in cases where maxillofacial structures have been lost due to cancer.

A 46-year-old Caucasian man was referred to the practice of the first author for restoration of the anterior teeth. The patient was concerned about the shape, color, and worn-out incisal edges of the teeth, for which he requested the options for gaining length and change in the color. He reported regular medical and dental attendance and had a noncontributory medical/dental history other than localized anterior wear. 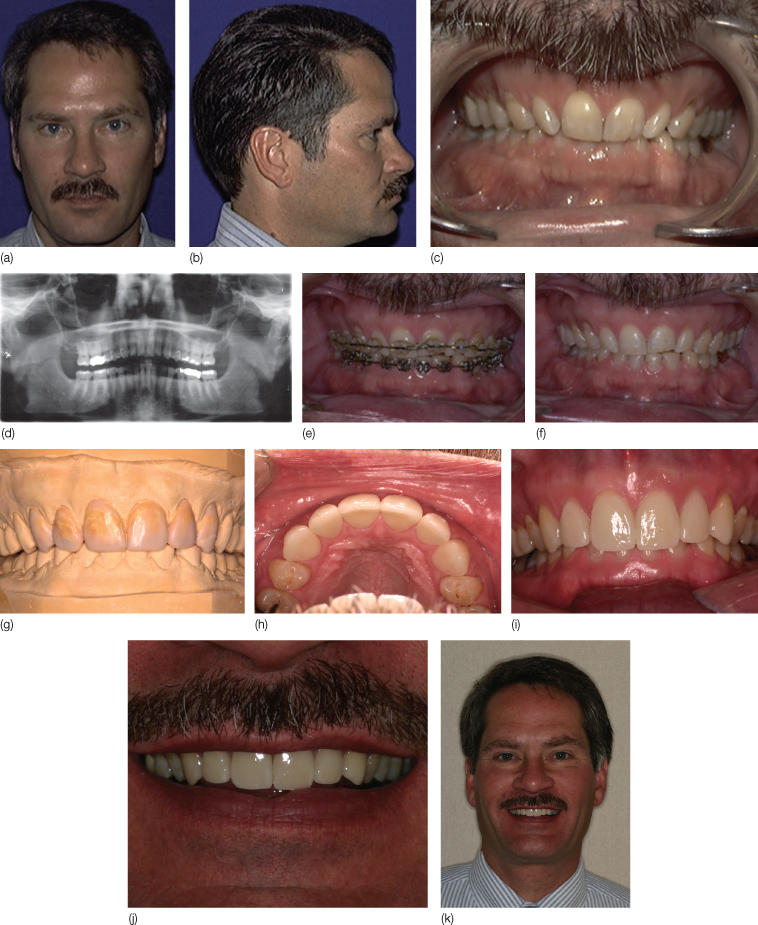 The patient was referred to an orthodontist who diagnosed the case as Class II Division 2 malocclusion characterized by a 2 mm overjet, a 90% overbite, a 1 mm deviation of the lower dental arch midline to the right of facial midline, and significant unesthetic gingival height concerns secondary to tooth wear and resulting cementoenamel junction (CEJ) extrusion. Analysis of the cephalometric radiograph indicated harmonious sagittal and vertical skeletal relationships, while the panoramic radiograph showed no pathology (Figure 17.1d).

The two treatment options available were placement of crowns over the anterior teeth or orthodontic intrusion to gain necessary clearance for tooth build-up. In addition, the guide for intrusion included not only reduction of the deep bite but also differential leveling of the CEJ and gingival margins as required.

Fixed appliances (0.022 inch × 0.028 inch, preadjusted edgewise) were bonded on the maxillary teeth in order to level and align the dental arch using the CEJ as a reference (Figure 17.1e). The maxillary incisors were intruded and the dental arches aligned according to standard orthodontic protocols. Once the objectives were accomplished, the fixed appliances were removed in consultation with the restoring dentist. The supraerupted maxillary and mandibular teeth along with their altered gingival margins were leveled (Figure 17.1f). Full coverage maxillary and mandibular clear retainers were delivered following the end of orthodontic treatment, and the retention was modified as needed during the restorative therapy. Permanent retention was placed at the completion of the restorative therapy.

A diagnostic wax-up was performed after the orthodontic treatment to plan the contours of the final restorations (Figure 17.1g), which was utilized to fabricate the provisional crowns for the anterior teeth after tooth preparation. All-ceramic full crown restorations (Empress Esthetic) were fabricated and cemented with a resin luting agent (Figure 17.1h,i). A post-insertion occlusal splint was fabricated.

Briefly, conservative rehabilitation of the patient was carried out by an orthodontic–prosthodontic interaction for restoring the maxillary anterior dentition. Although various other approaches, such as restoring the maxillary arch, and endodontic therapy with crowns on all anterior teeth are available, but the associated increase in financial burden and compromised esthetics were considered major drawbacks. Accordingly, the orthodontic treatment plan was felt to be the best option and the one which would provide an optimal result. The interactive approach that followed was the most logical one for the preservation of the dental occlusion and for the restoration of anterior function and esthetics (Figure 17.1j,k).

Case 2: Use of Dental Implants for Anchorage and Orthodontic Tooth Extrusion for Implant Site Development

A 58-year-old Caucasian man was referred to the graduate prosthodontics clinic at the Ohio State University for prosthodontic rehabilitation (Figure 17.2a–c). The patient’s medical history revealed that he was allergic to penicillin with no systemic diseases and a negative smoking history. He was under no medications requiring dental precautions. He was categorized as American Society of Anesthesiologists (ASA) I (normal, healthy with no systemic disease). 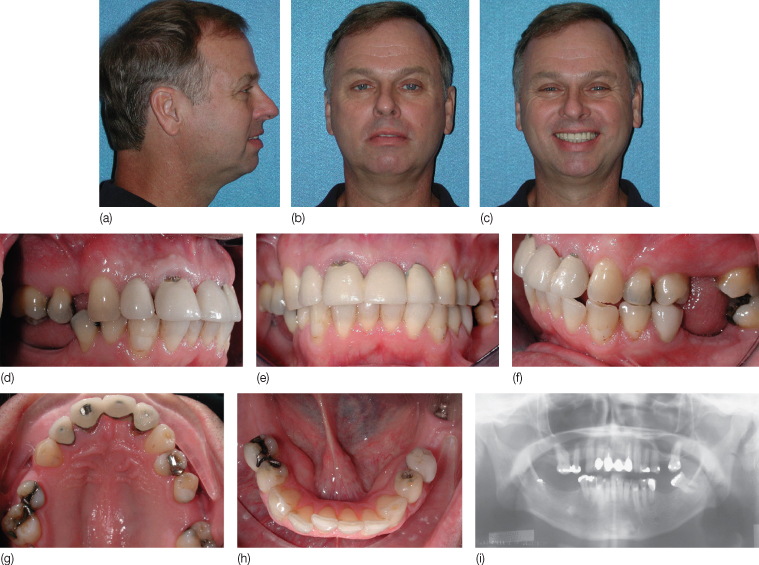 The intraoral examination revealed several carious teeth, generalized attrition with an increased interocclusal space, tooth malpositions, and a loose fixed partial dental prosthesis on the upper central incisors and the upper left lateral incisor caused by the fracture of the left lateral incisor abutment tooth (Figure 17.2d–h). The upper left central incisor was lost at the age of 30 years due to trauma while playing basketball. The patient reported that his posterior teeth had been removed due to caries and provided history of sporadic dental care. There was ‘edge-to-edge’ occlusion in the anterior region, contributing to deleterious forces on the anterior fixed partial dental prosthesis causing the abutment tooth fracture. In addition, the left mandibular third molar was severely tipped, with no other mandibular molars present. This situation, most likely, caused the patient to primarily use his anterior teeth during masticatory function. The periodontal examination revealed generalized, plaque-induced mild gingivitis with localized pocketing. There was an absence of bleeding on probing with satisfactory dental hygiene.

A Cadiax electronic pantographic analysis (WhipMix Corp, Louisville, KY) was performed to assist in the diagnosis of occlusal parameters, and to determine the hinge axis location (Figure 17.2i). This provided clinical information for therapeutic decisions. Diagnostic casts were obtained and mounted with a kinematic facebow and standard centric relation records. An analysis of the casts and patient data revealed that even though the remaining dentition could be used, there was a need for extensive rehabilitation involving well-coordinated surgical, periodontal, orthodontic, endodontic and prosthodontic treatment procedures. Accordingly, the treatment plan included the following:

2. Endodontic treatment of the left mandibular second premolar with a provisional crown

3. Dental implants in position of the mandibular right and left second molars to be used initially for orthodontic anchorage (Figure 17.2j)

4. Orthodontic treatment, repositioning of the maxillary and mandibular dentition

Figure 17.2 (j) Pre-orthodontic implant placement (treatment provided by Dr Brock Satoris). Implants were placed in the position of the mandibular right and left second molars for anchorage for the orthodontic therapy. Orthodontic brackets were attached to the abutments. Precise location of implants was obtained through a diagnostic set-up. 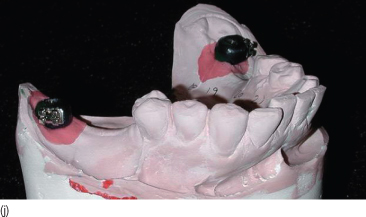 The patient was then referred to the Graduate Periodontics and Orthodontics clinics for a consultation to determine whether the above-mentioned therapy was feasible.

The patient was first referred to the orthodontic clinic of the Ohio State University. The orthodontic resident and the third author determined that the mandibular anterior teeth needed to be retroclined to gain horizontal and vertical overlap of the anterior teeth in order to restore anterior guidance. The bony architecture around the maxillary left lateral incisor was not favorable for implant placement, so this root was to be orthodontically extruded in preparation for implant placement.

Analysis of the cephalometric radiograph revealed a skeletal Class I malocclusion (SNA = 82.3°, SNB = 80.3°), with normal facial divergence (SN-MP = 29.3°). The lower incisors were proclined (108° to mandibular plane), and were at 8.4 mm from the A-Po line. The panoramic radiograph demonstrated evidence of amalgam (tattoo), condensing osteitis, and mandibular tori (Figure 17.2i). Examination of the periapical radiographs confirmed the presence of pulp pathology in the maxillary right central incisor and the mandibular left second premolar.

The primary objective of the orthodontic treatment was to provide adequate overjet so that the maxillary implants could be placed with proper axial inclination and allow for occlusion with the natural mandibular anterior teeth. Thus distalization of the mandibular arch was desired. Such en masse tooth movements require solid, reliable orthodontic anchorage. The patient had missing multiple posterior teeth, further complicating the desired posterior en masse movement. Endosseous implants were placed initially to provide anchorage for the orthodontic tooth movement and these same implants were later used for restoring some of the missing teeth, making implant placement a critical step. A diagnostic orthodontic wax-up was used to simulate tooth movements (e.g. the mandibular premolars were distalized and the mandibular anterior teeth were retracted). The space for future implants was estimated and the position of the terminal mandibular implants that were to serve as orthodontic anchors was accurately determined. Similarly, the positions of the maxillary teeth at the end of orthodontic treatment were also determined. There was a cant in the mandibular arch and the full correction of this was not attempted.

Dental implants in the positions of the mandibular right and left second molars were used as anchorage for the mandibular tooth movement. Special abutments were fabricated, each with an orthodontic bracket soldered to it. It was from these orthodontic attachments that the retraction mechanics were initiated. New provisional restorations were made for the maxillary right central and left lateral incisors and a pontic with an orthodontic attachment was fabricated for the left central incisor (Figure 17.2k–o).

Figure 17.2 (k–o) Fixed orthodontic treatment. The maxillary posterior spaces were developed. In the mandible, coil springs are being used to produce en masse retraction of the mandibular incisors.

The patient was treated in the graduate periodontics clinic and his periodontal health was maintained throughout the surgical and orthodontic phase of the therapy. Extractions and several graft procedures were carried out, along with placement of several amalgam and composite dental restorations to re-establish oral health and to create the necessary base for the proposed crowns. Finally, implants were placed in the positions of the maxillary right central incisor, left lateral incisor and first molar, and mandibular right and left first molars in preparation for single crowns and fixed partial denture restorations.

This interactive case did not progress in a linear fashion. There were several changes in the tr/>