The impact of tissue engineering on orthodontics is clearly visible in experimental studies, but it only represents the beginning of a process. Recent advances in the regeneration of anatomically correct teeth and periodontal ligament/bone are among examples of biological regeneration in the field of orthodontics. Regenerative therapies are already being utilized in the clinic, including enamel matrix extracts and platelet-derived growth factors for periodontal regeneration. Clinical orthodontics provides ample opportunities for tissue engineering including segmental tooth movement, cleft lip and palate, orofacial deformities, temporomandibular joint regeneration, and congenital craniofacial anomalies. Regeneration of multiple dental, oral and craniofacial tissues by bioscaffolds, bioactive factors, tissue engineering and/or stem cells offers unprecedented challenges and opportunities for orthodontics.

Orthodontics and dentofacial orthopedics is ‘the branch of dentistry that specializes in the diagnosis, prevention and treatment of dental and facial irregularities. The practice of orthodontics requires professional skills in the design, application and control of corrective appliances to bring teeth, lips and jaws into proper alignment and to achieve facial balance.’ (American Association of Orthodontists, www.aaomembers.org). Contemporary orthodontics is widely considered to have originated in the early years of the twentieth century, when Edward Hartley Angle began to practice fixed appliance treatment, by dragging and/or pushing malaligned teeth into esthetic positions with metallic bands and brackets cemented to the teeth. Over the past century, orthodontics, or the field later named as orthodontics and dentofacial orthopedics (ODO), has witnessed few fundamental innovations, although many diagnostic and therapeutic refinements have been instituted (Mao et al., 2010).

Tissue engineering is defined as ‘the application of the principles and methods of engineering and life sciences toward the fundamental understanding of structure/function relationships in normal and pathological mammalian tissues and the development of biological substitutes to restore, maintain, or improve functions.’ This definition was crafted by a joint task force organized by the National Institutes of Health and the National Science Foundation in 1988. Thus, tissue engineering is a much younger field in comparison with orthodontics, but has nonetheless witnessed robust growth in the fields of tissue healing and organ defects that are currently deemed incurable by contemporary medicine.

Many challenges remain for tissue engineering of dental, oral and craniofacial structures. Considerations such as high demand for esthetics, appropriate vascularization, the complex environment, the need for accommodating multiple tissue phenotypes, and the need to be taken into account when dental, oral and craniofacial tissues are candidates for tissue engineering, are major determinants. A number of approaches have been explored to determine and accommodate the needs for regenerating craniofacial tissues. For tissue engineering to be successful, one must understand the structure and function of the tissue to be regenerated, and then apply this knowledge in the design of tissue engineering strategies. The basic tenets of tissue engineering have been to incorporate cells and scaffold and signaling molecules into in vitro analogs of tissues that are to functionally replace diseased or lost tissues (Figure 20.1) (Langer and Vacanti, 1993; Rahaman and Mao, 2005; Scheller et al., 2009). 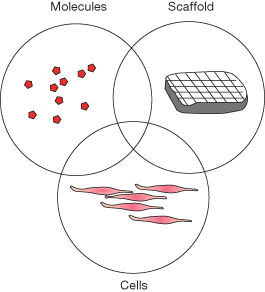 In postnatal life, stem cells are generally those rare cells with potential to differentiate into multiple cell types. Usually, stem cells are quiescent in the body and serve as reserve cells. Under physiological conditions, stem cells periodically replenish themselves in a process known as cycling or self-renewal, to maintain a renewable stem cell pool (Watt and Hogan, 2000; Verfaillie, 2002). Self-renewal is fundamental for biological tissues, not only to replace dead or aged cells, but also to repair pathological defects or trauma (National Institutes of Health, 2009). With the great deal of interest in regeneration of dental, oral, and craniofacial tissues, one should not overlook the role of stem cells in maintaining tissue homeostasis. Tissue turn-over is exemplified most obviously by epithelial cells of the skin, and by bone cells. Skin and bone, as well as many other tissues, undergo physiologically necessary turnover throughout life.

Stem cells are unspecialized cells, and have the potential to become one or more specialized cell types. For example, mesenchymal stem cells are capable of differentiating into cells such as osteoblasts, fibroblasts, chondrocytes, and myocytes (Figure 20.2) and can give rise to bone, cartilage, bone marrow stroma, interstitial fibrous tissue, skeletal muscle, tendons, ligaments, as well as adipose tissue (Jiang et al., 2002; Mezey et al., 2003; Alhadlaq et al., 2005; Sonoyama et al., 2005; Marion and Mao, 2006; Stosich and Mao, 2007; Lee et al., 2010a). Upon injury or in diseases, adult stem cells are activated to repair tissue and organ defects. Whereas the ability to maintain homeostasis is physiological, wound healing and tissue regeneration represent interventional therapies of stem cells that are being pursued in virtually all tissues and organs (Watt and Hogan, 2000; NIH, 2009). Mesenchymal cells continue to reside in various tissues and are the sources of adult mesenchymal stem cells (MSCs).

(Courtesy of the American Society for Clinical Investigation.) 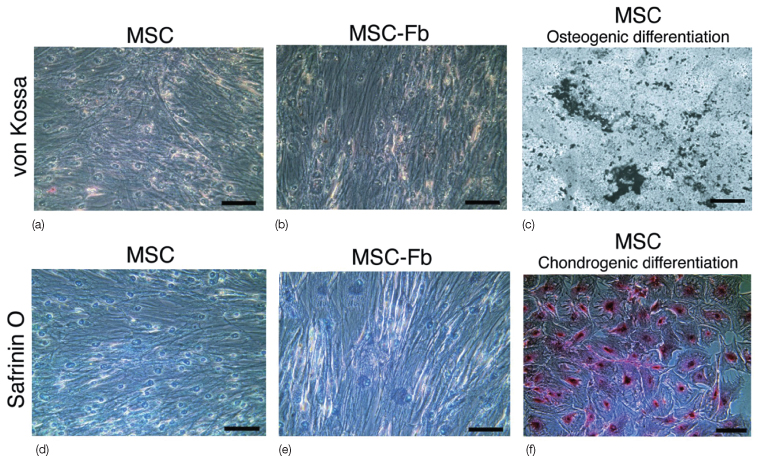 Bone marrow is the source of at least two stem cell populations: MSCs and hematopoietic stem cells (HSCs). Isolation of MSCs from bone marrow was first described by Friedenstein and collaborators (1974). MSCs isolated by adherence to culture plates are heterogeneous. Only a fraction of cells among typical MSC preparations are stem cells (Lee et al., 2010b). Several studies have explored the potential of MSCs in the regeneration of craniofacial tissues, such as alveolar bone, periodontium, and even ectomesenchymal-based tooth structures (Kawaguchi et al., 2004; Maria et al., 2007; JY Kim et al., 2010; K Kim et al., 2010). HSCs are co-inhabitants of bone marrow with the MSCs and the MSCs and osteoblasts serve as stromal cells for HSCs. HSCs give rise to and replenish all blood cell lineages. The osteoclasts, the bone-resorbing cells during bone turnover and orthodontic tooth movement, derive from this hematopoietic lineage (Kyba, 2005).

Cranial neural crest cells are essential for the development of craniofacial structures. The head is formed through an interaction between mesodermal and cranial neural crest cells. The neural crest arises from the ectoderm-derived neural tube during prenatal development at approximately day 20 in the human embryo (Bhattacherjee et al., 2007). These cells migrate to the presumptive face, and possess the ability to self-renew and differentiate into multiple cell types for the genesis of teeth, bone, and cartilage. How neural crest cells differentiate into craniofacial tissues is only partially understood. The cranial neural crest cells migrate into the pharyngeal arches, disperse throughout this region, and give rise to the ectomesenchyme, which will interact with its surroundings to form the diverse tissues mentioned above as well as other tissues such as the neurons and glia of cranial ganglia (Chai et al., 2000; Graham and Smith, 2001; Le Douarin et al., 2008). Craniofacial bones are further developed by intramembranous ossification or deposition of bone matrix by osteoblasts. Tooth morphogenesis occurs via a series of complex signaling interactions between the oral epithelium (dental lamina) and the underlying ectomesenchyme (Olsen et al., 2000; Tucker and Sharpe, 2004). In comparison, the bones of the rest of the body form by mesoderm-derived mesenchymal cells, through endochondral ossification where there is a chondrogenic template, before bone matrix is laid down (Vaglia and Hall, 1999; Olsen et al., 2000; Noden and Trainor, 2005).

On completion of tooth morphogenesis, stem cells have been identified in several dental and periodontal structures including the dental pulp of both deciduous and permanent teeth, the papillae, periodontal ligament, dental follicles, and dental-derived epithelial stem cells (Gronthos et al., 2000; Miura et al., 2003; Seo et al., 2004; Honda et al., 2007; Sonoyama et al., 2008; Yao et al., 2008). It should come as no surprise when stem cells are discovered in any biological tissues, given the fundamental roles of stem cells to maintain tissue homeostasis and participate in tissue repair following trauma or pathological insults.

Biomaterials are frequently, but not always, needed for tissue engineering and tissue regeneration. For example, stem cells are infused for the repair of cardiac infarcts and can be delivered into cardiac muscle defects typically without biomaterials as scaffolds. In contrast, a scaffold is frequently required for the regeneration of most dental, oral and craniofacial structures, because they are three-dimensional structures of functional and esthetic importance. A variety of scaffolds have been developed as extracellular matrix analogs, capable of supporting cells. At least, biomaterial scaffolds should be biocompatible, nontoxic, and promote tissue regeneration (Box 20.1). Biodegradable materials are frequently desirable, given their predesigned purpose to undergo controlled degradation, while tissue genesis takes place (Scheller et al., 2009).

Poly (D,L-lactide-co-glycolide) (PLGA) is a synthetic material, that can be fabricated into various kinds of structures, to better mimic the extracellular matrix environment (Figure 20.3). They are widely used as scaffolding materials for several biomedical applications in humans as part of tissue engineering (Athanasiou et al., 1996; Agrawal and Ray, 2001; Fu et al., 2008). Human MSCs (hMSCs) proliferate and maintain differentiation characteristics towards osteoblasts and chondrocytes when seeded in PLGA nanofibers (Xin et al., 2007) (Figure 20.4). Another widely used nanofiber is poly (ε-caprolactone) (PCL), which has been used for the differentiation of hMSCs into adipogenic, osteogenic, and chondrogenic cells (Li et al., 2005). 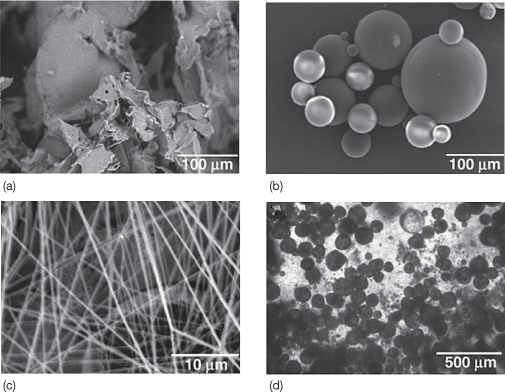 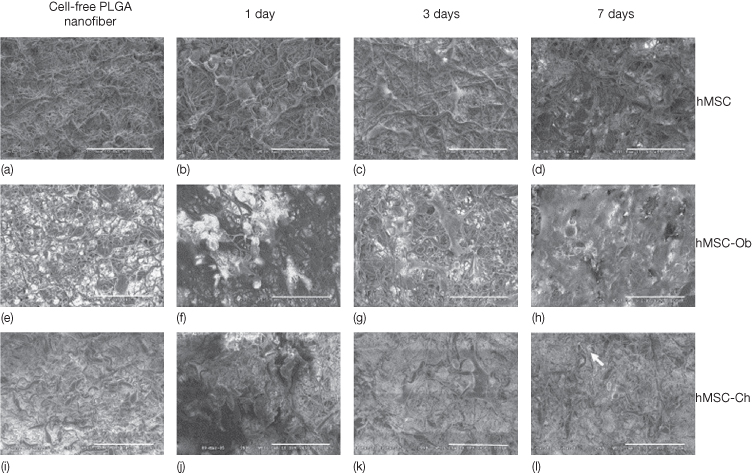 Impact of Tissue Engineering on Orthodontics

Reconstruction of oral and craniofacial defects frequently involves multiple and complex issues, and has a high demand for the sake of improving both function and esthetics. Current approaches for facial reconstruction suffer from several intrinsic deficiencies. For example, autologous tissue grafts necessitate donor site morbidity; prostheses may not fully integrate with h/>