Nitrous Oxide-Oxygen pharmacosedation (N2O-O2) continues to gain popularity in clinical use in medical, dental, nursing, and paraprofessional offices. The advantages of stress reduction in the apprehensive and/or medically compromised patient is responsible for this continued expansive growth. The aging population that in years past would not have come to the dental office because of systemic illness is now capable of undergoing extensive treatment because of advancing medical technology. These new patients not only are increasing in numbers, but also have the affluence to pay for treatment and comfort.

The evolution of sedation should include advances in supportive medications and therapies in addition to the heightened awareness of the public to the possibility of increased therapeutic service with sedation; these factors have helped thrust N2O-O2 to the forefront. Professional education became more formalized and took a significant step forward approximately 30 years ago when the Council on Dental Education of the American Dental Association accepted standards for educational programs for inhalation sedation.

Along with the increased use of N2O-O2 has come a greater concern for the safety of personnel who are in contact with it for the greatest length of time—the dentist and dental office staff. The following three categories are addressed in this regard:

Throughout the history and evolution of N2O, N2O was widely recognized to exert an influence on the general physiognomy of humans. What was not understood was the concept of addiction. From Horace Wells to Sigmund Freud, we see through the pages of history the great scientists and many unknowns who have succumbed to experimentation, usually without thought of chemical consequence.

As times have passed, the fact that chemicals have biologic effects and are even capable of causing death has come to be recognized. Health agencies around the world have been organized to protect the public from hazardous products circulating in society.

N2O is found naturally in the atmosphere in minute quantities. It is quickly reversible in action, but is it totally harmless?

Little was known of the possible effects of inhalation of minute amounts of anesthetic vapors until the late 1960s. Until that time, little was done to eliminate anesthetic vapors delivered into the ambient air from anesthesia machines. In 1967, Vaisman1 published the results of a survey of Russian anesthesiologists in which it was demonstrated that they suffered a higher incidence of irritability, headache, fatigue, nausea, pruritus, spontaneous abortion, and fetal malformation than non–operating room personnel. This was the first report that inhalation gases may exert a negative influence on human physiology. Subsequent retrospective studies followed that seemed to confirm Vaisman’s result.2–4 It must be emphasized that in these studies, N2O was but one of many gases under investigation. Because it is the most commonly used inhalation anesthetic, N2O is found in all samples of air taken from operating rooms. It is used in conjunction with O2 and other more potent inhalation anesthetics, such as halothane, enflurane, sevoflurane, and isoflurane. Therefore it has been impossible to separate the effects of any one of these gases from the others. In other words, the findings presented here are potentially produced by any one of the drugs found in the operating room. Because of the special nature of dental practice, in which virtually the only inhalation anesthetic used is N2O, the findings of these operating room studies were not applicable to the dental profession.

In the United States, Cohen et al5,6 published articles in the 1970s dealing with anesthetic health hazards in the dental setting. One article contained a study that surveyed more than 50,000 dentists and dental assistants who were exposed to trace anesthetics. The results suggested that long-time exposure to anesthetic gases could be associated with an increase in general health problems and with disease of the reproductive system in particular. This study was of course retrospective in nature, and it only fueled the concern regarding the safety of N2O in the dental office. Unfortunately, this “study” did not contain any measured data on these trace gases that were involved in any of the environs reported.

In 1974, Bruce, Bach, and Arbit7 “investigated the possibility of N2O affecting perceptual cognition and psychomotor skills of personnel exposed to varying concentrations of the gas.” They reported that just hours of exposure to as little as 50 ppm could result in audiovisual impairment. Despite multiple attempts to duplicate their results, all efforts failed. However, the National Institute for Occupational Safety and Health (NIOSH) and the Occupational Safety & Health Administration (OSHA) became interested in these studies and established 50 ppm to be the maximum exposure limit for personnel in the dental setting. It was determined that 25 ppm was achievable in the operating room, and therefore this became the standard for that setting. Multiple attempts to reproduce the research results of Bruce, Bach, and Arbit8 have failed; interestingly, these researchers have retracted their conclusions, indicating that the results were not based on biologic factors.9

The results of this “research,” as one would expect, caused a concern and subsequent decline in the use of N2O-O2. Indeed, there was alarm in the manufacturing and equipment industry for N2O-O2 that bordered on a crisis. In 1995, I conducted a worldwide literature search on the topic of biohazards associated with N2O-O2 use. I retrieved 850 citations, of which 23 met the predetermined criteria for scientific merit.10 The conclusion drawn from this literature review was that there was no scientific basis for the previously established threshold levels for the hospital operating room or the dental setting. This research became the impetus for a meeting of interested parties representing dentistry, government, and manufacturing. A result of the September 1995 meeting, sponsored by the American Dental Association’s Council on Scientific Affairs and Council on Dental Practice, was the formal position statement that a maximum N2O exposure limit in parts per million has not been determined.11

The specific biologic issue is the inactivation of methionine synthase. This enzyme is linked to vitamin B12 metabolism. Vitamin B12 is necessary for DNA production and subsequent cellular reproduction. N2O does affect methionine synthase and does, in high concentration and long exposure (24 hours or greater), have an effect on reproduction.12 However, to date there is no evidence that a direct causal relationship exists between reproductive health and scavenged low levels of N2O.13,14 Sweeney et al15 were the first to link reproductive problems in humans with long-term N2O exposure. They used a sensitive test—the deoxyuridine suppression test—to accurately determine the first signs of this biologic effect in humans. Sweeney et al found that long-term exposure levels of 1800 ppm of N2O did not exert any detectable biologic effect in humans. They suggest that a level of 400 ppm is a reasonable exposure level that is both attainable and significantly below the biologic threshold.

An additional specific biologic issue surrounding N2O includes the fact that N2O in very high nontherapeutic doses can cause leukopenia and reduction in megaloblastic erythropoiesis resembling pernicious anemia. Neurologic disorders associated with long-term N2O exposure appear as myeloneuropathy.16–20 Symptoms, such as sensory and proprioception impairment, may be permanent, but are usually temporary with a slow recovery.

Today, it is below the standard of care to not have a scavenging nasal hood10 (Figure 17-1). They are cheap, disposable, and readily available. The scavenging nasal hood is a double mask—an inner mask contained within a slightly larger outer mask. Each mask has two tubes entering into it so that the entire apparatus has four tubes, two on either side of the nasal hood. The inner mask receives a fresh supply of N2O-O2 from the inhalation sedation unit and delivers gas to the nose of the patient through two tubes that are slightly larger in diameter than the other two tubes. The outer, slightly larger, mask connects to the two slightly smaller tubes that connect with the vacuum system. Thus a small vacuum is present in the space between the inner and outer masks. On exhalation through the nose, all exhaled gases are vented into the outer nasal hood and then, via the vacuum, are carried away from the patient and the treatment area (Figure 17-2). 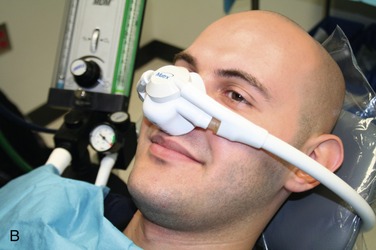 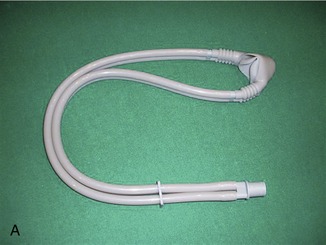 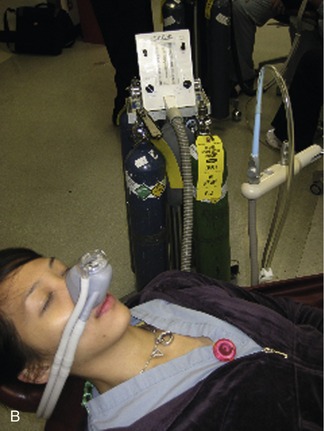 Figure 17-2 A, Scavenging nasal hood and tubing. B, Attached to vacuum system, exhaled gases are vented away from the operating area.

An additional benefit of the scavenging nasal hood is that peripheral leakage of gases resulting from improper fit of the mask is prevented because the outer nasal hood is attached to the vacuum system and will remove any such gases before they reach the ambient air.21 The optimum and recommended vacuum flow rate is 45 L/min. At this rate, leakage of N2O-O2 into the room is prevented even when the mas/>