• Description and Sequencing of Orthognathic and Other Frequent Simultaneous Procedures: Step-by-Step Approach

Maxillofacial surgeons and orthodontists are the primary clinicians who care for individuals who present with jaw deformities, malocclusions, and the associated facial dysmorphologies. When an orthognathic approach is indicated, there are a limited number of basic surgical techniques that are used to facilitate the three-dimensional repositioning of the skeletal units (i.e., the maxilla, the mandible, and the chin region) to achieve desired improvements in head and neck function and to enhance facial aesthetics. By and large, these options include the Le Fort I (Type) osteotomy, with or without segmentation of the down-fractured maxilla; sagittal split ramus osteotomies of the mandible; and an oblique osteotomy of the chin. Each of these three basic osteotomies and its associated fixation techniques has evolved gradually to its current usage (see Chapter 2).1–6

This chapter provides the surgeon with a step-by-step technical description for the safe execution of Le Fort I osteotomy of the maxilla, sagittal split ramus osteotomies of the mandible, osseous genioplasty, and other frequent simultaneously performed procedures (e.g., septoplasty, reduction of inferior turbinates, recontouring of the nasal floor, removal of wisdom teeth, neck region soft-tissue rejuvenation) as I routinely carry them out (

Video 6 and 7). The approach is described as it is typically executed for the patient who is undergoing all of these procedures simultaneously. An individual’s unique anatomy and clinical presentation may require variations in surgical approaches and sequencing of treatment.

Description and Sequencing of Orthognathic and Other Frequent Simultaneous Procedures: Step-by-Step Approach

Step 1. The patient is placed supine on the operating room table with the head in a Mayfield (horseshoe) headrest in the neutral neck position.

Step 2. A nasotracheal cuffed (Ring-Adair-Elwyn [RAE]) tube is inserted by the anesthesiologist and then secured by the surgeon to the cartilaginous septum with suture (#0 Ethibond). An additional suture (#0 Ethibond) is placed in the midline anterior hair-bearing scalp and then around the endotracheal tube extension over the top of the head to further secure it and to limit tension on the nose (Fig. 15-1). 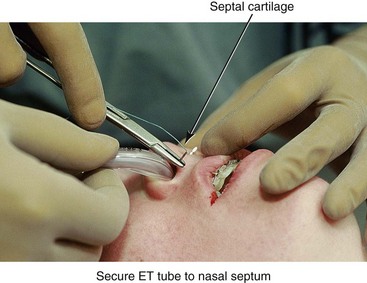 Step 3. Ophthalmic antibiotic ointment and protective corneal shields are placed beneath the eyelids (or temporary tarsorrhaphies are performed, if preferred) to prevent corneal injury during the operation (Fig. 15-2, A through C). 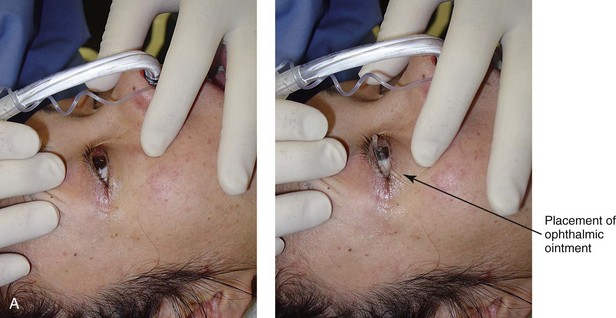 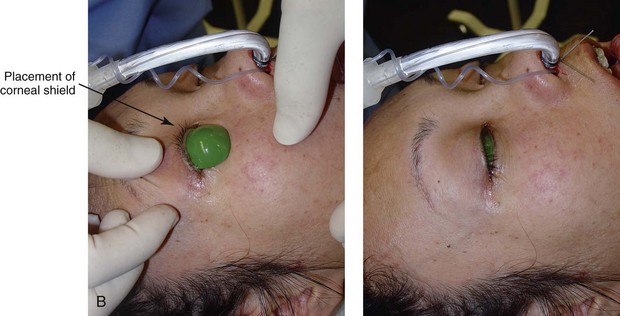 Step 6. The head and neck are prepped with povidone–iodine (Betadine) solution. Avoid using soap or alcohol solutions that could irritate the cornea and the mucous membranes. Draping should provide for adequate exposure of the forehead, the eyes, the external ears, the face, and the neck. Staples are used to secure the drapes (Fig. 15-3). 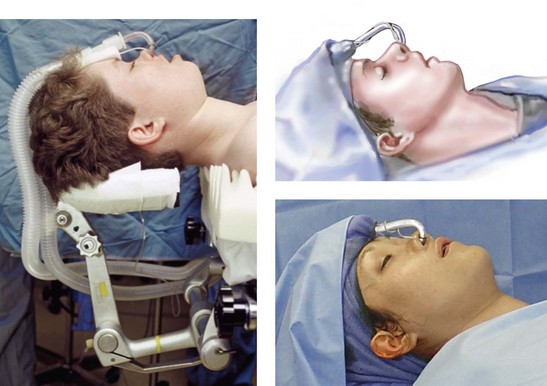 Step 7. The mouth and pharynx are suctioned, and a moistened gauze with a radiopaque marker is inserted as a throat pack. The teeth and dorsum of the tongue are cleansed with a sterile toothbrush (1.5% hydrogen peroxide or 0.12% chlorhexidine). The mouth is irrigated with normal saline solution and suctioned.

Step 8. Steroid cream (e.g., betamethasone 0.5%) is applied to the lips to limit edema that could otherwise result from contusion during surgery.

Step 10. A medium rubber mouth prop is placed between the maxillary and mandibular molars on one side to maintain mouth opening. Attention is turned to the lateral vestibule of the contralateral mandible.

A Incision Option One: No erupted wisdom tooth for extraction. If there is no erupted wisdom tooth to extract (i.e., if the wisdom tooth is fully impacted, absent, or erupted and is to remain in place), an incision is made with a Bovie electrocautery device or a knife (no. 15 blade) in the depth of the vestibule adjacent to the second molar (Fig. 15-4, A). The incision extends both anteriorly and posteriorly for a total length of 4 cm. The incision is carried down to bone. A sufficient cuff of mucosa is maintained adjacent to the gingiva of the molar teeth for relaxed wound closure. 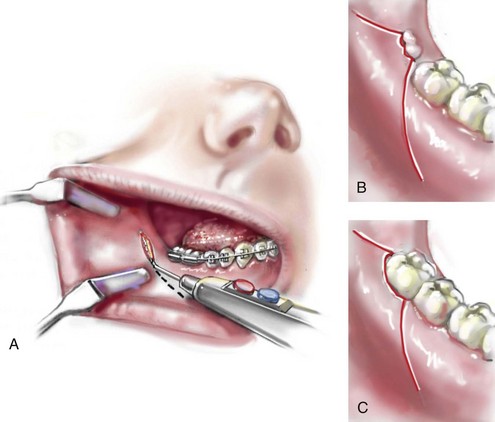 B and C. Incision Option Two: Erupted or partially erupted wisdom tooth for extraction. If there is a partially erupted (Fig. 15-4, B) or fully erupted (Fig. 15-4, C) wisdom tooth to be removed, the incision starts 1 cm distal and lateral to the wisdom tooth and extends to the distobuccal line angle of the tooth. The incision continues anteriorly along the cervical gingival margin of the tooth within the sulcus and then anterior and lateral into the depth of the vestibule. The incision is carried down to bone. A sufficient cuff of mucosa, including part of the papilla, is maintained adjacent to the gingiva of the second molar for relaxed wound closure. 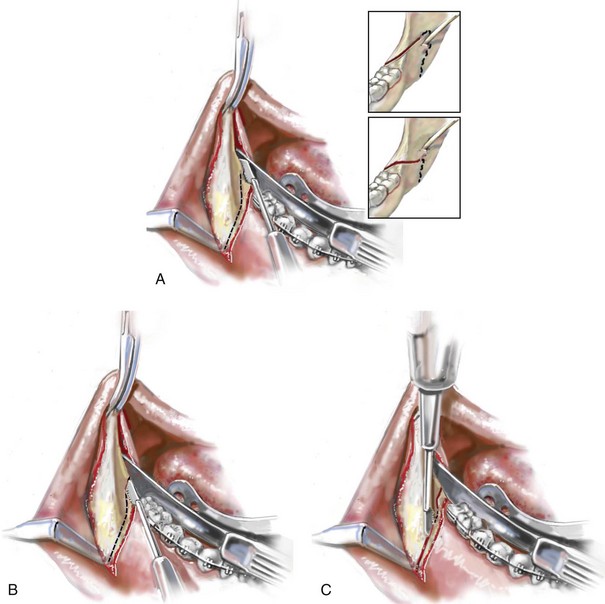 Step 14. With a sterile pencil, the osteotomy lines are marked out for the sagittal splitting of the ramus of the mandible. A reciprocating saw (i.e., with a short, straight blade) completes the cortical osteotomies.

A The first cut is made horizontally through the medial cortex of the ramus. This is judged to be just superior to the occlusal plane of the mandibular molars and well inferior to the region of the anterior aspect of the ramus, where the medial and lateral cortices join and no longer maintain a medullary cavity. The medial osteotomy need not extend more than 2 cm posterior (Hunsuck modification) (see insert of Fig. 15-6, A). By keeping the medial cut “low” (i.e., close to the mandibular molar occlusal surface) and “short” (i.e., only 2 cm back), the incidence of a “bad” split (i.e., with the condyle as a third segment) is greatly reduced.

B The osteotomy then extends anteriorly and just lateral (buccal) to the molars. It is important that the saw blade penetrate the cortex and enter the medullary cavity in all locations. If the wisdom tooth is impacted, the saw blade will bounce off the wisdom tooth just after penetrating the superior paper-thin cortex (Fig. 15-6, B); this will be just lateral to the second molar. The blade will penetrate back into the medullary cavity as the osteotomy progresses anterior past the impacted tooth.

COMMENT: When later “splitting” the ramus (see Steps 53 through 58), as the inferior alveolar nerve enters the mandibular foramen, it may remain within either the proximal segment or the distal segment (see Fig. 15-6, A inset). Traditional thinking is that the medial osteotomy must remain above the mandibular foramen as it extends posterior. I believe that it is more important to keep the medial osteotomy low and short; this is a reliable way to achieve a favorable split with limited risk of the condylar component inadvertently remaining part of the distal segment. After the low and short split is completed, I do not favor the automatic need to completely remove all aspects of the inferior alveolar nerve that may remain within the proximal segment. This is especially true at the mandibular foramen location. I do not drill out or curette the inferior alveolar nerve from the proximal segment unless it would otherwise be under tension after repositioning the distal segment. In my experience, however, this is not usually the case.

Step 15. If the wisdom tooth is erupted and is to be removed, then the extraction is completed now or just before the cortical osteotomies; doing so before the actual split will limit a fracture of the lingual plate that may otherwise occur during dental extraction. A rotary drill with a tapered fissure bur may be used to judiciously remove bone adjacent to the tooth and to section the tooth to facilitate an atraumatic extraction.

Step 16. The wound is irrigated and suctioned. The retractors are removed, and two 1 inch × 3 inch cottonoids are placed for packing (i.e., hemostasis). One is placed along the medial ramus, and the other is placed along the lateral body of the mandible.

Step 17. Attention is turned to the contralateral ramus of the mandible, and identical procedures to those described in Steps 10 through 16 are carried out.

Step 18. With the use of a Tessier caliper, the vertical distance (height) between the medial canthus and the mid-maxillary incisor crown is measured on the left and right sides and recorded; this generally measures between 55 mm and 70 mm (Fig. 15-7). This is a reproducible relative measure of the anterior vertical maxillary height (see Chapter 12).

NOTE: If 70 mm is the baseline measurement and 3 mm of vertical intrusion at the incisors is a surgical objective, then, after maxillary repositioning, 67 mm should be the new measurement before the placement of fixation across the Le Fort I osteotomy.

Step 19. Attention is turned to the vestibule of the maxilla on one side. Two medium “toed-in” retractors are used to retract the lip and cheek and thus expose the vestibule. A circumvestibular incision is initiated from the zygomatic buttress region anteriorly toward the midline (Fig. 15-8). It is useful to remain deep in the vestibule and to leave a full cuff of mucosa adjacent to the attached gingiva of the teeth. The most posterior aspect of the incision remains just anterior to and on the dental (vestibular side) of the visualized parotid duct. The incision is made with a Bovie electrocautery device or a knife (#15 blade). Once the incision is made through the mucosa the knife is directed toward the dentoalveolar region and down to bone. This will avoid injury to the infraorbital nerve and limit the exposure of the buccal fat pad. 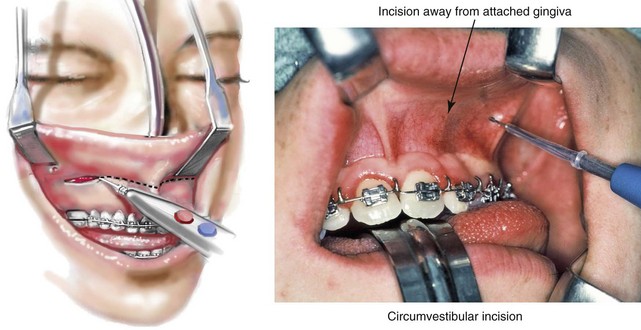 Step 20. Straight and curved elevators are used for the subperiosteal dissection of the anterior maxilla extending to and on either side of the infraorbital nerve; extending medially to expose the pyriform rim, the floor of the nose, and the anterior nasal spine; and extending posterior to the pterygomaxillary junction. A long “toed-out” retractor is placed subperiosteally in the pterygomaxillary space (Fig. 15-9).

Step 21. The two medium toed-in retractors are shifted to the contralateral side of the maxilla, and the identical incision, dissection, and exposure are accomplished as described in Steps 19 and 20. 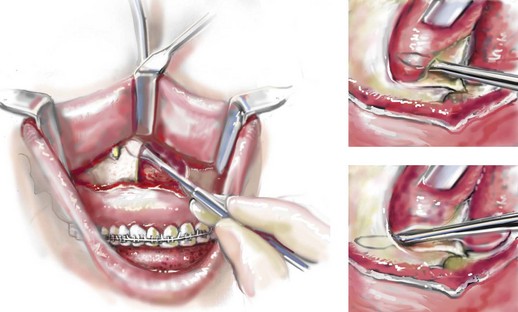 Step 23. With four medium toed-in retractors (one on either side of the infraorbital nerve on each side of the maxilla) and two long toed-out retractors (one in each pterygomaxillary junction) in place, the anterior maxilla is fully visualized. A sterile pencil is used to mark the location for the horizontal Le Fort I osteotomy (Fig. 15-11). If significant maxillary intrusion is planned, a second parallel osteotomy line is marked out. The lower marking (i.e., the osteotomy site) is placed to be within the sinus, above the roots of the teeth, into each lateral nasal aperture, and below each zygomatic buttress. If an ostectomy is to be preformed, the upper marking is made superior and parallel to the lower marking and below the infraorbital nerves (Fig. 15-11). 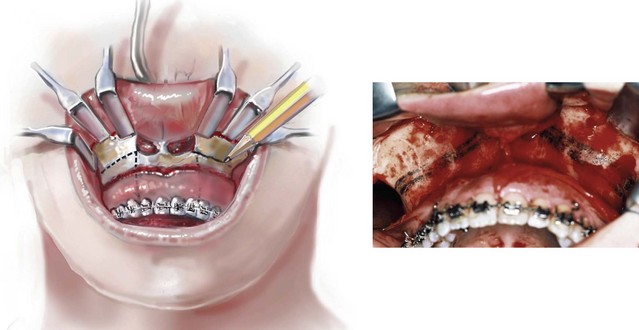 Segmentation of the Maxilla 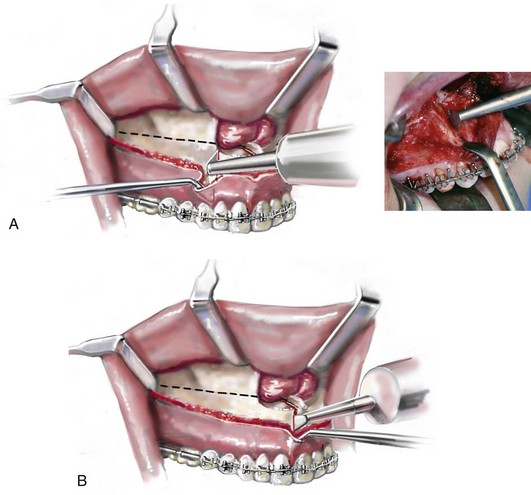 NOTE: The lateral incisor and canine roots—and, to a lesser extent, the two central incisor roots—are naturally divergent. Therefore, there is no advantage or need for the orthodontist to create a gap for the interdental osteotomy. Perforation into the periodontal ligament space with injury to the dental roots when completing these interdental osteotomies should be an uncommon occurrence. 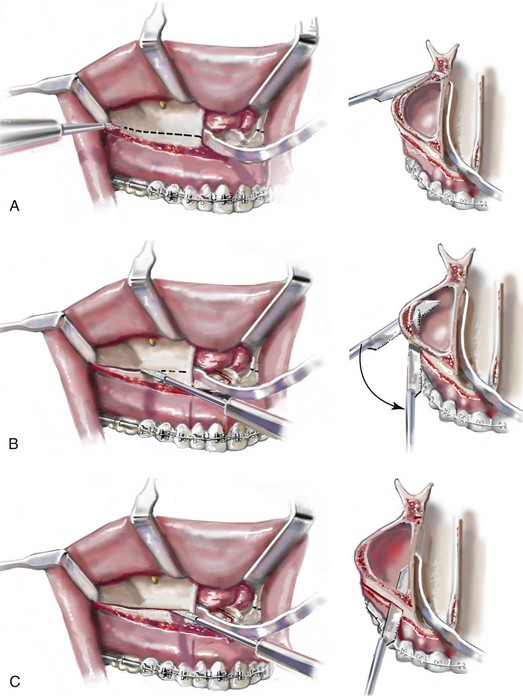 Step 26. With a specialized guarded chisel and mallet, the septum of the nose (i.e., cartilage and bone) is separated from the maxilla. Care is taken to avoid penetration past the septum into the nasopharynx (Fig. 15-14).