15 Orthodontic Treatment of the Transverse Dimension—Assessment of the Evidence

Orthodontic Treatment of the Transverse Dimension—Assessment of the Evidence

The purpose of this chapter is to discuss the various applications of transverse maxillary expansion and assess the evidence supporting its use.

Prevalence of Posterior Crossbite in the Deciduous and Mixed Dentition

Estimates for the incidence of posterior crossbite range from 5-23% with a greater prevalence of unilateral crossbite coupled with a lateral shift of the mandible. The results of cross-sectional studies on various populations are shown in Table 15.1. 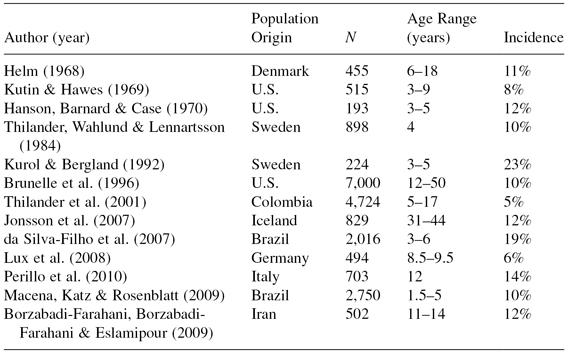 A few studies with small sample sizes have reported wide variation in rates of spontaneous correction from the primary dentition to the mixed dentition or adolescent dentition. These studies are summarized in Table 15.2.

Transverse maxillary expansion was introduced in 1860 by Emerson C. Angell. He described the application of a removable jackscrew appliance, activated 7 mm in 2 weeks, that produced a significant maxillary midline diastema (Angell 1860). His suggestion that the appliance produced a separation of the midpalatal suture was roundly criticized by the dental profession (Timms 1999). Another 30 years would pass before numerous case reports and the advent of radiography would support Angell’s original insight (Haas 1961; Timms 1999). Many notable U.S. orthodontists of that era, including Angle, Case, Ketcham, and Dewey, maintained an indifference to the procedure. It remained outside mainstream orthodontic therapy until Andrew Haas reintroduced the technique to American orthodontists using a tooth-tissue-borne appliance fabricated with palatal acrylic to maximize lateral translation of the maxillary basal bone and posterior teeth (Haas 1961).

A skeletally mature patient with midpalatal suture synostosis generally will not respond well to orthopedic rapid maxillary expansion (RME). Lack of suture opening, excessive tipping and/or buccal root resorption of anchor teeth, buccal plate boney defects, gingival recession, and expansion asymmetry are potential problems that have been seen when orthopedic RME is attempted in a nongrowing patient (Koudstall et al. 2005). Although closure of the midpalatal suture was originally thought to be the primary resistance to orthopedic RME in nongrowing patients, the resistance to expansion was shown to be mainly from other maxillary articulations, in particular the zygomatic buttresses and the pterygoid junctions (Haas 1961; Isaacson & Ingram 1964; Lines 1975). Surgical release of these sites of resistance reduces RME complications significantly (Bell & Epker 1976).

Surgical procedures for SARME were described as early as 1938 (Brown 1938) but were rarely reported until the 1970s when case reports using simultaneous osteotomies of the piriform aperture, the zygomatic buttresses, the pterygoid junctions, and parallel to the midpalatal suture were published. Since then opinions vary as to the number of osteotomy sites required for stable surgically assisted expansion (Koudstall et al. 2005).

In the orthodontic literature, there is a wide range of therapeutic interventions under the term maxillary expansion. After Haas sparked a resurgence of RME (Haas 1961), an evolution of various RME appliance designs and protocols followed, including removable, tooth-borne, tooth-tissue-borne, and bone-borne expansion appliances with a range of activation times from 0.5 mm per day (rapid maxillary expansion) to 0.25 mm every 2 days (slow maxillary expansion) (Lagravère et al. 2006a). Recently, there has also been a resumed interest in maxillary expansion with the edgewise appliance using a self-ligating variation (Damon 2005). Moreover, the timing and intended therapeutic benefits of these various interventions differ. Maxillary expansion may be applied early or late during growth or in nongrowing patients with reported treatment goals that may include one or more of the following: correction of posterior crossbite, correction of functional mandibular shift associated with posterior crossbite, improved dental arch perimeter length, and improved sagittal inter-arch molar relationship. This heterogeneity of maxillary expansion interventions and the wide variety of outcome variables also poses significant restriction on the strength of the conclusions available to the clinician from systematic reviews on this topic. As such, the clinician, desirous of employing an evidence-based approach to the use of maxillary expansion therapy, is faced with a complex problem of determining what works, for what condition it is best applied, and when to apply it.

It cannot be denied that the many maxillary expansion interventions reported and used in our profession work sufficiently well to support clinical practice. Yet, our profession should continue to strive for information that reveals the most effective and efficient interventions. This duality begs the question, What clinically significant questions about maxillary expansion intervention have been answered from an evidence-based point of view?

The most current evidence-based information regarding the immediate effect of 2–4 weeks of RME activation comes from a meta-analysis conducted by Lagravère et al. (2006a). Three hundred thirty-seven studies on the skeletal and dental effects of RME, published between 1966 and 2004, were evaluated. Fourteen of the 337 studies were chosen for the meta-analysis. The results show that the immediate treatment effects of RME in the transverse dimension are, on average, 60% dental and 40% skeletal. The average intermolar width gains at the tooth crown and root apex were 6.7 mm and 4.4 mm, respectively. The average increase in basal maxillary width (jugale-jugale) was 2.73 mm, and the average increase in nasal width was 2.14 mm. In the sagittal view, overjet increased 1.29 mm. A point moved anteriorly 0.82 degrees, and B point moved posteriorly 0.62 degrees. Vertical skeletal changes of the mandibular plane to the occlusal plane and the S-N plane were 1.65 degrees and 1.95 degrees, respectively. Although the 14 studies used a variety of appliances, including Haas, banded Hyrax, and bonded Hyrax appliances, interappliance comparisons could not be evaluated.

Slow maxillary expansion using quad-helix or Minne expansion springs producing 2–10 N of force over 3–4 months is reportedly preferred to RME because of lower forces and better tissue adaptation during expansion (Hicks 1978; Bell 1982). The most current evidence-based information regarding the immediate skeletal and dental effects of slow maxillary expansion comes from a systematic review conducted by Lagravère et al. (2005a). Surveying the literature from 1966 to 2004, they retrieved 31 articles on slow expansion, 8 of which met the authors’ inclusion criteria. Their results reflect slow expansion of patients 7–15 years of age. Due to the fact that none of the eight studies used a control group to factor dental and skeletal changes occurring during treatment, the authors could draw no strong conclusions on the dental and skeletal effects of this technique.

Harrison and Ashby (2001) searched for randomized clinical trials (RCTs) and controlled clinical trials (CCTs) with children and/or adults as participants and published between 1970 and 1999 for outcomes resulting from treatments for posterior crossbite. Thirteen trials were evaluated. They concluded that expansion with a removable plate or reduction of cuspal interferences during the late primary/early mixed dentition is effective in eliminating crossbite. They could make no firm conclusions regarding differing outcomes for two-banded versus four-banded hyrax expansion, removable plate versus quad-helix versus hyrax expansion, or banded versus bonded slow maxillary expansion. They could not come to any conclusions on the long-term stability of crossbite correction for any expansion intervention.

The authors’ lack of strong conclusions was based on significant limitations in the 13 trials evaluated. None of the trials reported on blinding of the examiners or method of randomization. A majority of the trials neglected to state the number of crossbite patients per group or if crossbites were corrected after treatment. Only 2 of the 13 trials had an adequate sample size to obtain a significant result, and/>

Tags: Evidence-Based Orthodontics
Jan 1, 2015 | Posted by mrzezo in Orthodontics | Comments Off on 15 Orthodontic Treatment of the Transverse Dimension—Assessment of the Evidence
Premium Wordpress Themes by UFO Themes
WordPress theme by UFO themes