Gerontology also comes under the title of geriatric dentistry or gerodontics and can be most simply defined as dentistry for the elderly. How older people are defined can be problematical. For some it is those who have reached the age when they receive a state pension (65 for men and women, as from 2010), but for those who have just reached that landmark it could be 75 years! It has been suggested that rather than having a defined chronological age, a biological age should be considered to be more relevant.

The UK has an ageing population (Figure 15.1). The population grew by 6.5% in the last 30 years, from 55.9 million in 1971 to 59.6 million in mid 2003. Continued population ageing is inevitable during the first half of this century, since the number of elderly people will rise as the relatively large numbers of people born after the Second World War, and during the 1960s baby boom, become older. The working age population will also fall in size as the baby boomers move into retirement, because relatively smaller numbers of people have been born since the mid 1970s. Current (2007-based) life expectancy of 77.7 years for men and 81.9 years for women compares with the1901-based life expectancy of 45 years for men and about 49 years for women (Office of National Statistics, 2009) (Table 15.1). 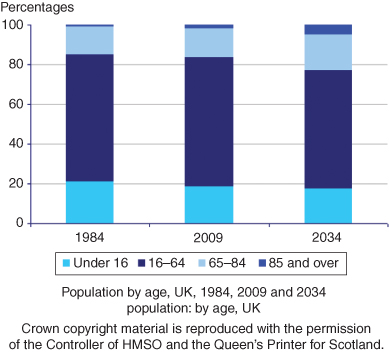 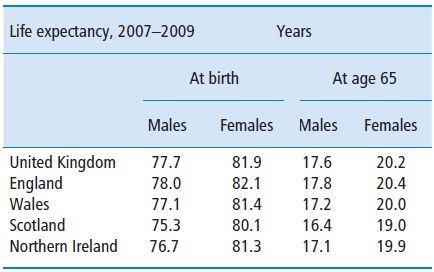 There has been an increasing demand for dentistry for the elderly. There are three main reasons for this:

There are several factors associated with dental care for the elderly. These are:

An exact dividing line between changes which are physiological and pathological cannot always be drawn.

In general the changes in the elderly are:

Patients with oesteoporosis can be treated with bisphosphonates and evidence has emerged that patients taking bisphosphonate drugs are at risk of developing oesteonecrosis of the jaws, sometimes spontaneously, but more usually following dental extractions or oral bone surgery.

Bisphosponates are principally used in the treatment of oesteoporosis, Paget’s disease, multiple myeloma, bony metastic lesions and hypercalcaemia of malignancy. The incidence of bisphosphonate-related oesteonecrosis of the jaw (BRONJ) in patients taking oral bisphosphonates for oestoeporosis has been estimated at 1 in 10 000 to 1 in 100 000. Patients taking high dose IV bisphosphonates for cancer are much more at risk (estimated at 1 in 10 to 1 in 100). Other factors associated with an increased risk include dental infection, denture trauma and the risk increases with the length of time the patient has been taking the drugs, with 3 years being the threshold.

Presenting features of BRONJ are:

If any of these features develop, early referral to an Oral Surgery or Oral Maxillo Facial Surgical Department is important.

There are several systemic conditions which are not uncommonly seen in the elderly, which may have an effect on treatment planning and delivery of care. The reader is referred to a more comprehensive text addressing the large number of pathological conditions affecting patients of all ages and having an impact on oral health care (Nunn, 2004) but the conditions more specifically related to the elderly are described below.

This can produce symptoms of tiredness and confusion and lead to a greater incidence of heart attack. Patients may feel dizzy on getting out of the dental chair and do not respond well to the stress of dental procedures. It may be advantageous to keep appointments short.

This can be due to, for example, a pituitary tumour, or the symptoms may be simulated by high steroid dosage. Patients on steroid therapy are susceptible to a steroid crisis and their physician may advise an increase in dosage when undergoing stressful dental treatment.

This is due to a lack of insulin and can occur in several forms. Type 2 diabetes is the most common type seen in older people. These patients may exhibit signs of decreased salivary flow, increased caries if uncontrolled, periodontal problems due to microvascular changes and slow wound healing.

Excess of parathyroid hormone (PTH) is usually as a result of a tumour. It results in demineralisation of the bone, causing possible bone fractures, and renal calculi may develop because of the excretion of high levels of phosphate and calcium.

This is a condition in which the body lacks sufficient thyroid hormone (thyroxine). Since the main purpose of thyroid hormone is to maintain the body’s metabolism, people with this condition will have symptoms associated with a slow metabolism. Its incidence increases with age and such patients appear lethargic and slow, have cold dry skin and may have an enlarged tongue. They respond poorly to stress.

A reduction in the cell-mediated response and a decreased number of circulating lymphocytes results in an increased incidence of autoimmune disease, combined with a reduced defence against infection with age. As stated above, steroid treatment for autoimmune disease can influence dental treatment because of the suppression of the patient’s natural adrenal activity.

Hypertension and ischaemic heart disease become more common with an increase in age. Anaemia is also more common in the elderly. Generally, the greatest problems with patients with cardiovascular disorders are associated with general anaesthesia.

There is a number of muscular dystrophic diseases which are associated with a decrease in the bulk of the muscle, with slower contractions and less precision of control.

There is a physiological decline in function associated with age-related disease.

This is a condition seen mainly over the age of 50 years. Parkinson’s disease occurs when a group of cells, in an area of the brain called the substantia nigra, that produce a chemical called dopamine, begin to malfunction and eventually die. Dopamine is a neurotransmitter, or chemical messenger, that transports signals to the parts of the brain that control movement initiation and co-ordination. When Parkinson’s disease occurs these cells begin to die at a faster rate and the amount of dopamine produced in the brain decreases. The symptoms include tremor of the hands and arms, drooling due to swallowing difficulties, postural instability and speech difficulties.

Dental treatment can be improved by the provision of mouldable head supports and mouth props. Patients are best treated upright in the dental chair because of the difficulty in controlling the airway. Treatment can usually be more successful if undertaken within 2 hours of taking anti-Parkinsonian medication.

Dementia is due to a wasting of nerve fibres in the brain. Alzheimer’s disease accounts for half of all cases of dementia in older people (5% of people over 65 years; 20% of those over 80 years of age). Patients may be treated by a variety of drugs, although older people tolerate these less well. Some of these drugs have xerostomia as an important side effect. Dental treatment can become increasingly challenging as the condition degenerates. Teeth with a poor prognosis, such as those with a furcation involvement, are probably better removed.

In older patients this can be due to high blood pressure, the use of anticoagulants (e.g. warfarin), or following heart surgery. Tolerance of dental treatment may be reduced and therefore short appointments are advisable. Patients may have difficulty in swallowing and may tolerate treatment better in an upright position. They may have to be treated in their own wheelchair or in a domiciliary setting.

This condition is not specifically related to age but is not uncommon in the elderly. These patients may exhibit signs of oral neglect through lack of self-motivation and low self-esteem. They may have symptoms of xerostomia due to drug therapy. They usually require extensive oral hygiene instruction and supervision with plenty of positive encouragement combined with a high dosage of topical fluoride. Appointments are best kept short.

These patients demonstrate thought disturbances, sometimes experience bizarre delusions and have difficulty in communicating with other people. Antipsychotic drug therapy tends to increase the heart rate and patients are generally restless when having dental treatment. They don’t respond well to sudden movements of the dental chair. The drug therapy also causes xerostomia with the added problem of an increased risk of extensive dental caries.

These conditions are covered in more detail in Chapter 3 but there are several mucosal diseases which are more common in the elderly. Some examples are given below.

This presents as white patches on the oral mucous membranes, which cannot be removed by scraping. The condition does not reverse with the removal of local irritants. It most commonly occurs between the ages of 40 and 70 and is more common in males (65%). It is usually located around the buccal gingivae or the floor of the mouth. It can be associated with tobacco, alcohol, candida infections or chronic persistent irritants, such as ill-fitting dentures. It requires investigation since these lesions can be considered to be pre-malignant until proven otherwise.

Whilst oral cancer is a relatively uncommon condition it does increase in occurrence in older adults. If it is not detected early, the survival rate in the elderly is poor. The most common sites are the lips followed by the tongue. Depending on the stage of the disease, survival can be as low as 50%. Approximately 90% of oral carcinomas are squamous cell carcinomas.

If an ulcer with a raised, rolled edge with hardening around the periphery of the lesion is detected, then a thorough history of the ulcer should be taken and the patient referred back to the prescribing dentist as soon as possible.

This can be either chronic or acute. Acute/>