The history of Z-plasty has been reviewed by Borges1 and Davis and Renner.2 Classically, this technique involves designing a Z with three limbs of equal length that form two triangular flaps of equal angles. The triangles represent angular flaps that are interchanged with each other by both pivotal and advancement tissue movement. Although the initial description of transposing equilateral triangular flaps was by Berger3 in 1904, numerous other descriptions have been recorded. In the 1800s, Fricke,4 Horner,5 Serre,6 and Denonvilliers7 described the transposition of cheek and temporal skin to correct eyelid ectropion and regional defects. However, in these case descriptions, the triangular flaps transposed did not have equal angles, nor were they the same size. In the late 1920s, Limberg elucidated the geometric principles involved with Z-plasty.8 He also noted that Z-plasties as well as the related Limberg or rhombic flap are best described as having both pivotal and advancement components. Whereas the classic Z-plasty follows specific geometric guidelines, Limberg demonstrated the flexibility of double transposition flaps that have a Z-plasty design. It is this flexibility that allows the wide-ranging applications and variations from the classic description.

A Z-plasty is used to accomplish one or more of three changes in the nature of a scar: change of scar direction, interruption of scar linearity, and release of scar contracture (lengthening of scar). Z-plasty should be considered when it is optimal to change the direction of a scar so that a portion of it is more easily concealed either within relaxed skin tension lines (RSTLs) or in a border between facial aesthetic regions. Similarly, with Z-plasty, a long straight scar may be divided into smaller irregular segments to allow better scar camouflage. Scars that cause distortion of facial features secondary to contracture may be lengthened with Z-plasty techniques, correcting or improving the distortion. As with other methods of scar revision that interrupt a straight scar, the scar resulting from Z-plasty will counter forces of scar contracture. This is because of the very nature of the Z-shaped scar that occurs from Z-plasty. Each segment of the Z contracts in a different direction. Z-plasty is particularly useful in treating contracted or webbed scars and scars that distort anatomic facial landmarks. A main advantage of Z-plasty over other techniques, such as W-plasty, is that it does not require skin excision for the procedure to be performed.

Mastery of the principles of Z-plasty allows its implementation in a number of situations. Correction of scars that cross the melolabial crease represents an ideal application of Z-plasty. In this circumstance, the central limb of the Z-plasty, which consists of the original scar, is moved into the crease. Wide or confluent scars treated with excision and primary closure often lead to significant wound closure tension. Z-plasty used along the wound margins to create an irregular scar has the effect of dispersing wound tension. Short (less than 2 cm) scars that do not rest in RSTLs are often best managed by Z-plasty. Contracted or webbed scars located in concavities are amenable to correction by Z-plasty. This includes vertical scars located in the concave areas of the neck, radial contractures that traverse the concavities of the auricle, and scar bands that cross the concave medial canthal region. Ectropions and retractions of the lower eyelid caused by vertically oriented scar contracture are often best corrected with Z-plasty because of its ability to release scar contracture. Similarly, lip scars are often contracted and require Z-plasty to lengthen the scarred segment and to restore a normal contour to the vermilion border. This listing of indications for use of Z-plasty is far from inclusive. For optimal results, many situations require a combination of scar revision techniques, such as W-plasty or geometric broken-line closure, in addition to Z-plasty.

The classic description of Z-plasty consists of a design in which the central limb and two peripheral limbs are in the shape of a Z such that two triangle-shaped flaps of equal size are created. All three limbs are of identical length, and the central limb consists of the scar that is to be lengthened or realigned. In the standard 60° Z-plasty (Fig. 14-1), a protractor may be used to measure the angles. However, a more practical means of estimating Z-plasty angles is to mark out a 90° angle and to divide it into thirds. A caliper or ruler is useful in the design of limbs of equal lengths. Transposition of the triangular flaps (angles ABC and BCD in Fig. 14-1) results in the following changes: the axis of the central limb is rotated 90° (in the example, a vertical scar is changed to a horizontal orientation); the distance between the points labeled B and C of the original central limb is increased; and the final scar is changed from a straight line to a nonlinear Z configuration. The overall length of the new scar created by the Z-plasty is increased by the sum of the length of the peripheral limbs of the Z.

Although a 60° Z-plasty is perhaps the most common design, angles between 30° and 90° are possible. Changing the angle of the flaps will cause a change in the length gained in the axis of the original central limb (B-C in Fig. 14-1). Theoretically, the percentage gain in length increases with larger angles (Fig. 14-2 and Table 14-1). However, the amount of lengthening noted in actual practice is usually less.

Theoretical Increase in Length of Central Limb of Z-Plasty

The initial length of the central limb affects the final outcome of Z-plasty. As the central limb of the Z is increased in length, so too is the gain in linear length between the points marking the ends of the central limb (points B and C in Fig. 14-1).9 Unfortunately, as the three limbs of the Z-plasty become longer, there is also a greater likelihood of a more apparent scar (Fig. 14-3). Multiple Z-plasties with shorter limbs to replace a single large Z-plasty with long limbs can circumvent this problem (Fig. 14-4). In this instance, a single long scar is divided into several smaller Z-plasties, usually with 60° angles.10 A single large 60° Z-plasty provides more gain in length than multiple small 60° Z-plasties along the same central limb.11 However, the aesthetic consequences and tissue availability for construction of the Z-plasty flaps often preclude the use of a single, large Z-plasty. On the face, limb length is usually limited to 1 cm or less. On the neck, limb length should not exceed 2 cm. 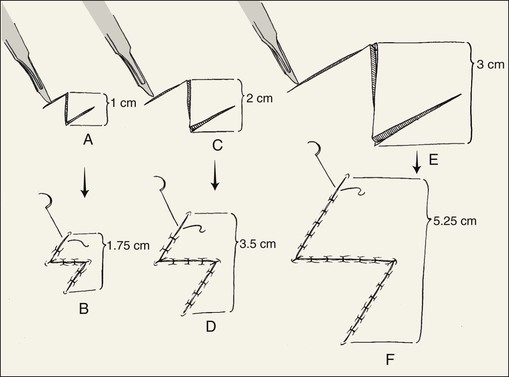 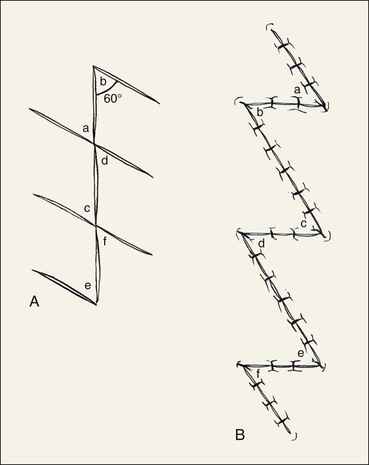 FIGURE 14-4 Multiple Z-plasties. Limbs of Z are limited to less than 1 cm on face.

In addition to the ability to vary limb length and angles of a Z-plasty, the actual design of a Z-plasty can be modified. One example is the four-flap Z-plasty. This technique increases the gain in length of the central limb by using four triangular flaps that are interposed between each other. A 90° Z-plasty is first designed, and then the 90° angle is bisected to design two 45° triangular flaps that are transposed (Fig. 14-5). Even greater gain in length of the central limb of a Z-plasty can be obtained by using 120° angles, which subsequently are bisected into four 60° flaps (Fig. 14-6). There are a number of variations on this theme, including a six-flap Z-plasty. However, the greater the number of flaps created, the greater is the total number of limbs and thus scars and the greater is the number of standing cutaneous deformities that develop when the flaps are transposed. Z-plasty may also be modified by use of flaps that have unequal angles. In such situations, the flap with the more acute angle is pivoted in a greater arc than that of the larger angled flap (Fig. 14-7). Minimal gain in length of the central limb will occur with unequal-angled Z-plasties. The main purpose of such designs is to transpose skin of the smaller angled flap to a more desirable location.2 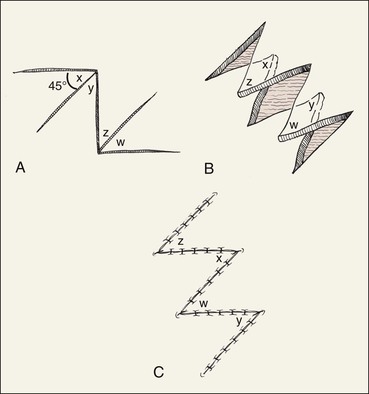 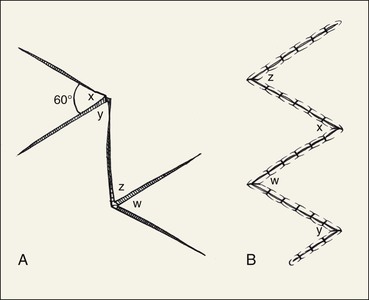 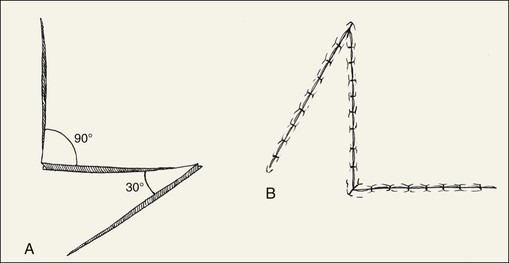 The discussion to this point has involved theoretical concerns about the classic geometry of Z-plasty. An understanding of the classic design is critical, but practical clinical considerations are even more important. Whereas length in the direction of the central limb is gained when a Z-plasty is used, it is usually not increased to the degree calculated.9 A number of studies have shown that the increase is considerably less in the clinical situation compared with the calculated gain.11 Similarly, there is a limit to the angles of the Z-plasty flaps that may be useful. Z-plasties less than 30° generally should not be used because of concern for vascularity of the narrow triangular flaps created by these acute angles. In the design of acutely angulated flaps, the width of the flap may be broadened by curving the limbs of the flap (Fig. 14-8). This modification may be useful in skin with an impaired blood supply, such as scar contracture associated with a burn or previous irradiation. Conversely, triangular flaps with angles greater than 75° will commonly produce standing cutaneous deformities that require excision. Thus, such large angled Z-plasties should be avoided whenever possible.

FIGURE 14-8 Z-plasty with curved limbs to maximize vascular supply to tip of flaps.

In designing a Z-plasty, evaluation of the surrounding skin and facial structures is necessary. Skin laxity at the base of each triangular flap of the Z-plasty must be adequate to allow proper pivotal movement of the flaps. If skin is contracted in a direction perpendicular to the central limb, Z-plasty may not be possible. Likewise, if a facial structure such as the eyelid, oral commissure, lip, or nasal ala is in proximity of the Z-plasty, distortion of these structures may occur. In planning of Z-plasty, it is also important to assess the degree of scar tissue in the central limb of the Z. The scar must be adequately resected or released to reduce resistance to transposition of the Z-plasty flaps (Fig. 14-9). Accordingly, it is essential to release and commonly to remove subcutaneous scar tissue. 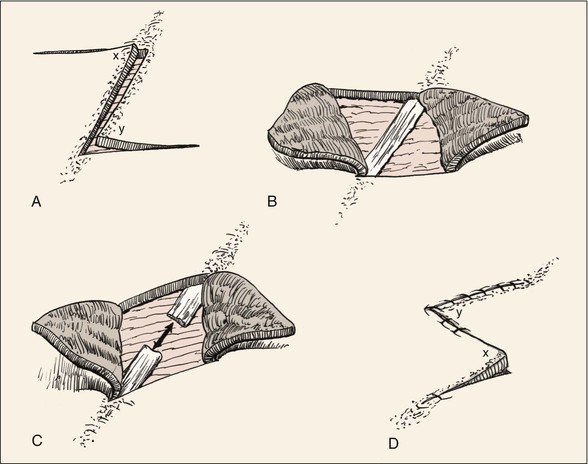 FIGURE 14-9 Release of scar beneath skin to facilitate transposition of Z-plasty flaps. 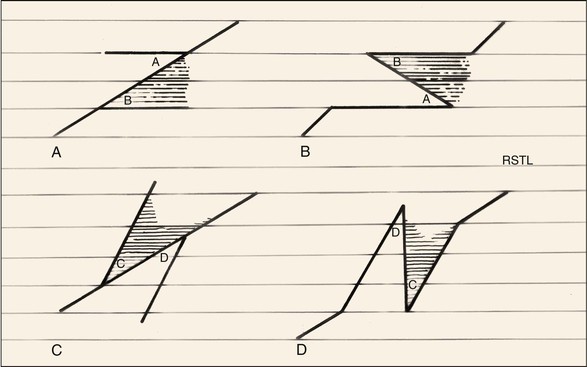 FIGURE 14-10 Two alternatives for design of Z-plasty: A-B and C-D. A-B is the preferred alternative as it best aligns scars with RSTLs.

An example of a wide scar oriented perpendicular to the melolabial crease can be used to illustrate the surgical technique of Z-plasty (Fig. 14-11). Improvement in the appearance is achieved by realigning the scar by a Z-plasty to translocate the scar (central limb of the Z) into RSTLs, in this case the melolabial crease. Because the scar is aligned 90° to the crease, a 60° Z-plasty is the preferred design. This will change the axis of the central limb of the scar 90° to its original axis. Note that two options exist for the 60° Z-plasty design (see Fig. 14-11). Figure 14-11A illustrates the preferred design option. After transposition of the flaps,/>