Today’s standards for aesthetic and functional results after reconstruction of facial defects are high, requiring meticulous planning and execution to achieve outcomes that are acceptable to both surgeon and patient. Since the advent of Mohs’ micrographic surgery for the treatment of cutaneous malignant neoplasms, complex surgical defects of the head and neck have become increasingly challenging to repair with an acceptable functional and aesthetic result.1 Primary wound closure for many skin defects is impossible and recruitment of adjacent tissue is required for repair. Over the years, careful study and practice have yielded a wealth of techniques and methods to aid the reconstructive surgeon with the repair of facial cutaneous defects. The use of local and regional cutaneous flaps to achieve wound closure with minimal distortion of surrounding facial landmarks is a hallmark of a well-trained plastic surgeon.

Cutaneous defects that are too large for primary wound closure must be addressed with grafts or flaps. In most instances, flaps are preferred to grafts because of their superior color and texture match with the surrounding skin. With proper planning, local flaps usually provide the preferred method of repair with the best aesthetic results and with minimal distortion of surrounding structures.2 A variety of classification schemes for local flaps have been proposed on the basis of blood supply, flap configuration, location, and method of transfer.2 A transposition flap typically has a linear configuration and pivots toward the defect over an incomplete bridge of skin. The base of transposition flaps is always adjacent to the defect. The rhombic flap is one type of transposition flap (Fig. 11-1). 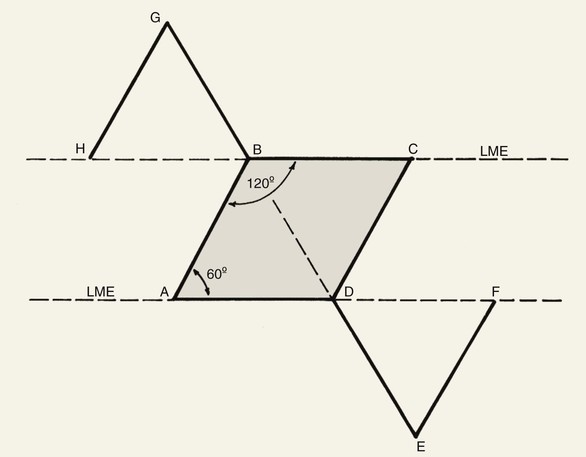 FIGURE 11-1 Proper orientation of two rhombic flaps to take advantage of lines of maximal extensibility (LME) of facial skin. Both sides of defect (B-C and A-D) are parallel to LME. Short diagonal is extended equal to its length, and cutback lines G-H and E-F are drawn parallel to nearest side of defect. Theoretical lines H-B and D-F complete equilateral triangles with bases on LME.

A thorough understanding of vascular anatomy and skin physiology and adherence to the principles of facial aesthetic regions are critical to the successful implementation of any local flap. The microcirculatory system of the superficial, dermal, subdermal, and musculocutaneous vascular plexuses provides a rich, redundant source of nourishment to local flaps.2 Flap survival hinges on two factors: the blood supplied through the base of the flap and the growth of new vascular channels between the flap and the recipient wound bed. Inosculation and neovascularization typically occur 3 to 7 days after flap transfer. Before this time, the flap is supplied by the perfusion pressure provided from the base of the flap and imbibition of nutrients from the wound bed itself.3

The evaluation of a defect begins in a systematic way, which will often aid the surgeon in the appropriate flap selection and design. Four specific factors should be addressed before bringing knife to skin. First, mobile structures such as the eyelid, lip, and melolabial fold must be accounted for in planning the flap and care taken to avoid distortion of these structures due to unfavorable vectors of tension. Second, an area of skin must be identified with adequate tissue laxity that is best suited for construction of a flap. Third, a careful evaluation of relaxed skin tension lines (RSTLs), lines of maximal extensibility (LME), and aesthetic boundaries must be made to plan incisions that will maximize scar camouflage and minimize wound closure tension.1 Fourth, scars and all vectors of tension after transfer of a flap must be anticipated, and these are the determining factors for flap selection and orientation. By use of this systematic approach to the analysis of cutaneous defects, the optimal flap may be chosen for reconstruction that will result in the least functional detriment and facial distortion.1

No single skin flap will provide the best wound repair for every defect. A thorough understanding of the wide array of local flaps available for reconstruction remains essential. A rhombic flap has long been considered a workhorse in the armamentarium of the reconstructive surgeon. This is in large part due to the simplicity of the flap design and the reliability with which it may be used to reconstruct cutaneous defects. The scars from flap transfer are predictable and typically cause minimal distortion of surrounding structures. Proper execution of a rhombic flap requires careful presurgical planning, a thorough understanding of the geometry of the flap, and an understanding of how the flap will affect surrounding tissues. When it is properly used, a rhombic flap can provide excellent aesthetic results.

The first rhombic transposition flap was initially described by Alexander A. Limberg in 1946 and was later published in 1963. On the basis of extensive work with paper models, Limberg described the use of a rhombic transposition flap with internal angles of 60° and 120° to fill a rhombus-shaped surgical defect with similar internal angles.4 If the cutaneous defect did not have the configuration of a 60°-120° rhombus, additional skin was removed to create the rhombus. A rhombus-shaped transposition flap with internal angles of 60° and 120° is often referred to as a Limberg flap. By working with paper models, the geometry of the Limberg flap can be appreciated as having a precise and exacting design.5 Paper lacks the distensibility of normal tissue, and therefore the standing cutaneous deformities produced from Limberg’s paper models are less forgiving than those in clinical practice (Fig. 11-2). 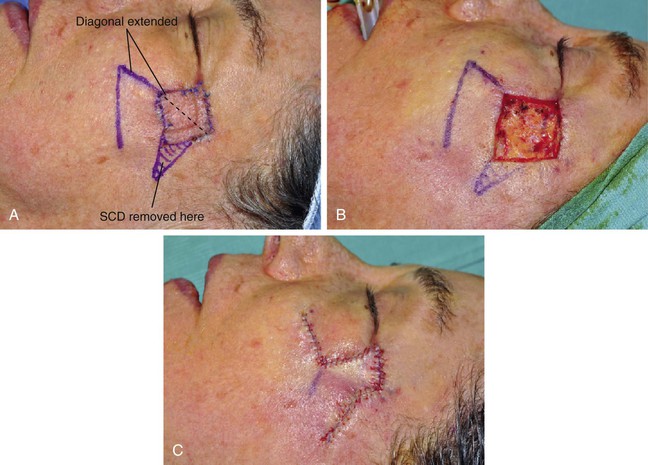 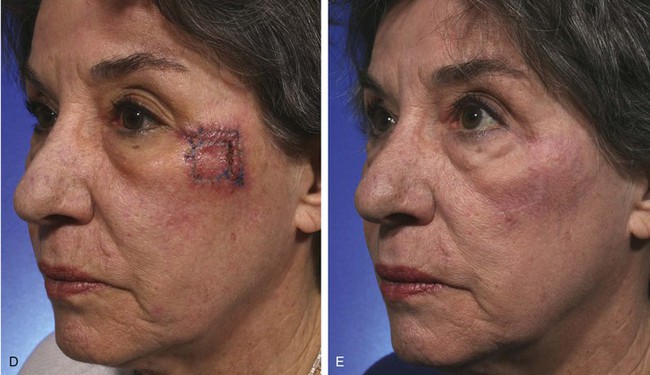 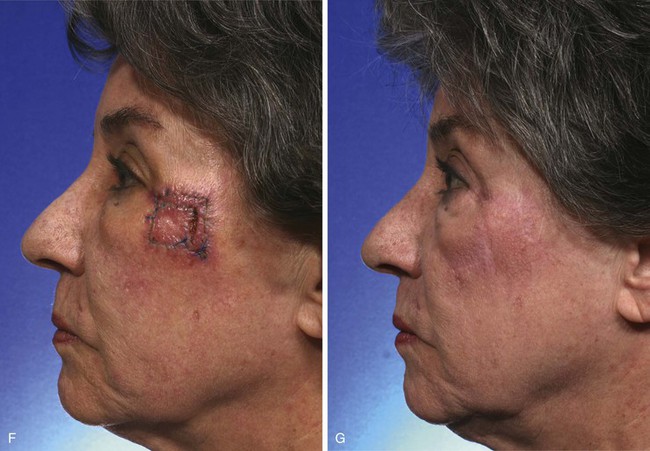 The use of the flap described by Limberg had some limitations, which gave rise to a number of variations, including those designed by Dufourmentel, Becker, and Webster.6-8 These modifications addressed issues of wound closure tension, the need to discard skin to create a rhombus-shaped defect, and standing cutaneous deformities. In 1962, Dufourmentel expanded on Limberg’s model and described a method to close any acute-angled rhombus-shaped defect. In 1977, Webster published another significant modification of the Limberg flap. He used a narrower 30° angled flap coupled with a W-plasty at the flap’s base to facilitate wound closure. This design required less excision of normal tissue to achieve repair of a defect. It also created less wound closure tension on the flap donor site.

The rhombic flap is a cutaneous, random vascular patterned flap that is transferred primarily by transposition with some limited advancement movement. The flap is dependent on its dermal and subdermal plexuses for survival.9 As with any random flap, care must be taken when undermining and transferring the flap to ensure that the dermal and subdermal plexuses are not injured.

When a Limberg flap is planned, the defect is modified to create a rhombus-shaped defect with internal angles of 60° and 120°. The 60°-120° rhombus may be thought of as two 60° equilateral triangles aligned base to base. Thus all sides of the defect are of equal lengths, which are in turn equal to the short diagonal of the defect.5 To design a Limberg flap, the line of the short diagonal of the defect is extended, bisecting one of the internal 120° angles. The line is extended a length equal to the short diagonal. This creates the first side of the flap (Fig. 11-1). The second side of the flap is designed by marking a second line of the same length as the first, parallel to the adjacent side of the rhombic defect, creating a 60° angle at the flap’s apex. The designed flap is equal in size to the defect. Four possible rhombic flaps can be designed for any rhombus-shaped defect. After transfer of a Limberg flap, the greatest wound closure tension is at the donor site.10 The tension vector runs roughly parallel to the original border of the defect adjacent to the flap. There is minimal tension across the other portions of the wound (Fig. 11-3).1 This is an important consideration when distortion of surrounding tissues must be avoided. Therefore, it is the axis of the maximal wound closure tension vector in relationship to LME that is the greatest determinant of flap selection. The scar that results from the Limberg flap is highly predictable and consists of straight, precise lines, not all of which run parallel to RSTLs. The surgeon can easily visualize the anticipated scar configuration and approximate vector of maximum wound closure tension by drawing the flap and then covering the two parallel sides of the flap with his or her fingers. 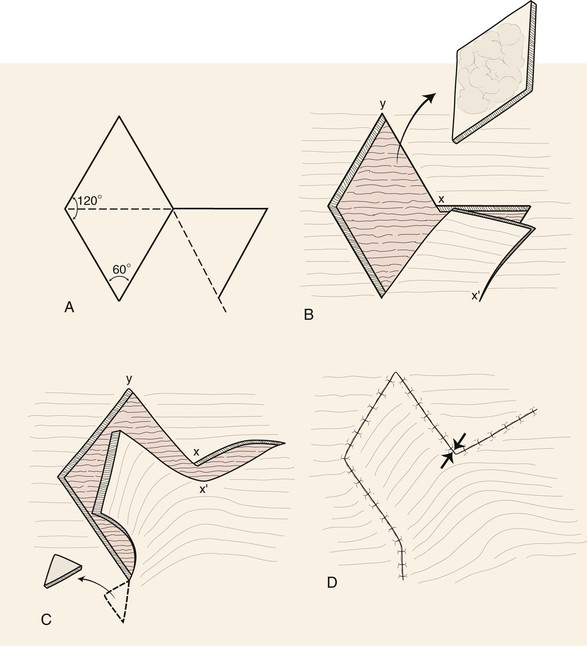 The Limberg flap has been used to repair defects of the cheek, temple, eyelids, nose, lip, chin, and neck (Fig. 11-4).9 The horizontal parallel furrows of the forehead make this region of the face particularly unsuitable for use of rhombic flaps. Disadvantages of the Limberg flap include the formation of a standing cutaneous deformity and the need to discard normal skin to convert the defect into a rhombus if the defect does not already have the configuration of a 60°-120° rhombus. In addition, a portion of the scar resulting from the flap does not lie in RSTLs, and thus scar camouflage is not as good as when certain alternative flaps are used. 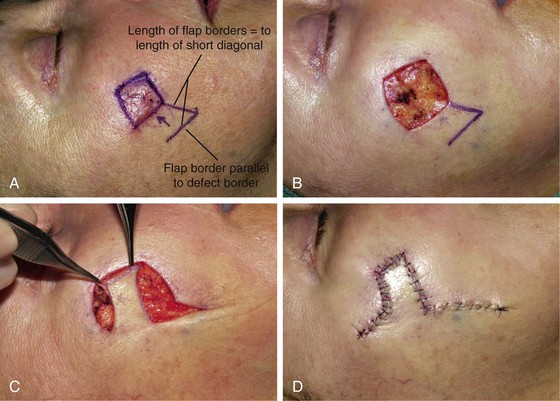 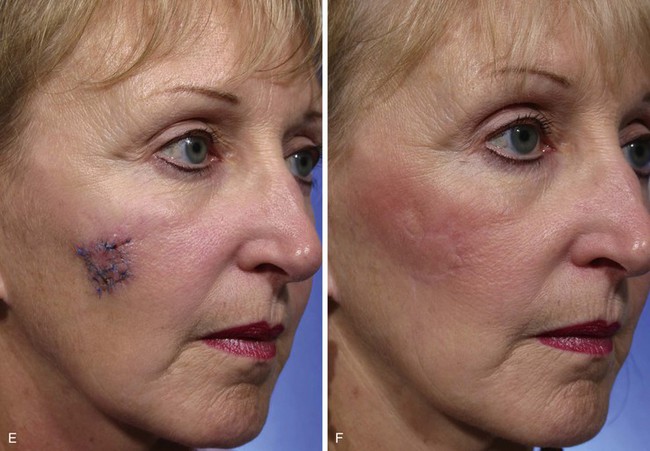 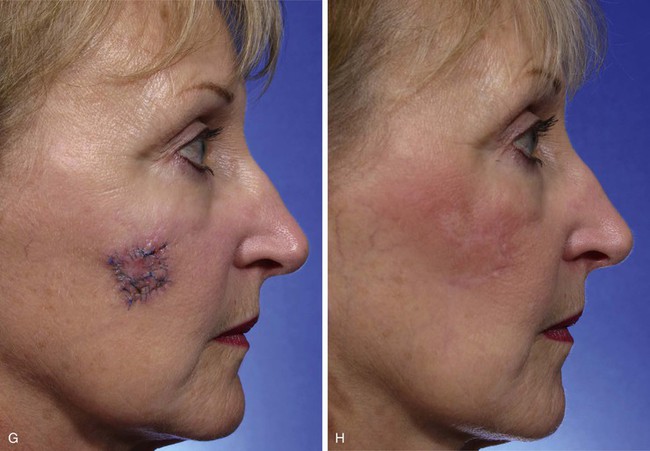