28: Management of Vascular Anomalies of the Face

Management of Vascular Anomalies of the Face

For the purpose of this chapter, the term vascular lesion or vascular anomaly is used to define a variety of cutaneous neoplasms and malformations originating from blood vessels and related structures. Owing to major differences in prognosis and treatment strategies, it is imperative to accurately differentiate between these various abnormalities. Vascular lesions can be divided into two main groups: vascular tumors and vascular malformations. Overall, vascular anomalies affect approximately 8% to 10% of births worldwide, which is nearly 400,000 new cases per year in the United States alone.1

Infantile hemangiomas, the most common vascular anomaly, are the most common benign tumor occurring in infancy and childhood and are present in about 2% of neonates. They are true tumors exhibiting the features of all neoplasms, such as increased mitosis and hyperplasia. Although up to 30% of these tumors may be present at birth, the majority become apparent in the first weeks of life. Infantile hemangiomas have a unique and characteristic natural history.1,2 During the first few months of life, they increase in size by proliferation (hyperplasia) and involve skin, mucosa, and subcutaneous tissues to variable degrees. Proliferation typically ends within the first 4 to 6 months and is followed by a quiescent plateau before regression begins. Rarely, growth may continue for 12 to 14 months after birth (Fig. 28-1).

The end of the proliferative phase marks the beginning of the involutional phase. During this phase, which may last years, the hemangioma undergoes varying amounts of regression in size and replacement with fibrofatty tissue. Approximately 30% to 40% of infantile hemangiomas involute to a cosmetically and functionally acceptable point and do not require any treatment. Necessary intervention is sought by the remaining majority of patients. Cutaneous hemangiomas may involve papillary dermis (superficial), papillary and reticular dermis, subcutaneous tissue (deep), or both skin and subcutaneous tissue (compound). They are most commonly focal, well-defined growths or diffuse, involving dermatome-like segments of skin. There are sites of predilection on the face (midface, nose, lips) for the development of hemangiomas.3 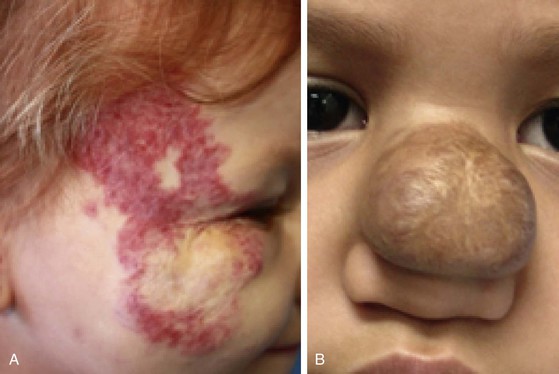 Congenital hemangiomas are completely formed and present at birth and are very different from infantile hemangiomas in their natural history and prognosis. Rapidly involuting congenital hemangiomas appear fully formed at birth, do not proliferate, and regress within the first year of life or do not (non–rapidly involuting hemangiomas).5 There are other, rarer vascular tumors that are beyond the scope of this chapter.1 Terms such as strawberry or capillary angioma and cavernous hemangioma are of historic and folkloric interest and should not be used in communicating about these abnormalities. More than 60% of infantile hemangiomas occur on the head and neck, predominantly in white children and somewhat less commonly in those of African or Asian descent. For unclear reasons, female neonates are more likely to be affected than male neonates in a 3 to 5 : 1 ratio. Infantile hemangiomas are more common in premature infants. The increased prevalence in premature neonates correlates with decreasing gestational age and birth weight.6,7 A plethora of new knowledge links infantile hemangiomas and placenta tissue. Many of the characteristic molecular markers of infantile hemangioma blood vessels are expressed uniquely by normal fetal microvessels. In particular, GLUT-1 (glucose transporter protein) is exclusively demonstrated by infantile hemangioma and placenta but not by other vascular anomalies or other normal tissues. There is also a striking similarity between the infantile hemangioma mRNA transcriptome and that of placenta. The leading hypothesis concerning this relationship is that fetal placental or precursor cells metastasize from the placenta to the baby and become implanted in areas of high flow, such as the head and neck. Little is known about the mechanism of this process; however, the link between placental and hemangioma cells is irrefutable.8

In contrast to infantile hemangiomas, vascular malformations (Fig. 28-3) are always present at birth, although they may not be apparent. They enlarge by hypertrophy, never proliferate, and never involute. They are true developmental anomalies, not neoplasms. Their rate of hypertrophy and hence their functional and cosmetic significance are extremely variable. Vascular malformations may originate from capillaries, veins, venules, lymphatics, arterioles, or any combination of these structures. Similar to hemangiomas, vascular malformations may involve skin, subcutaneous tissues, and mucosa. Like hemangiomas, they may be superficial, deep, compound, focal, or diffuse.9

Capillary malformations are superficial, pink macules previously known as salmon patch, angel’s kiss, or stork bite. They most commonly involve the midline of the nape of the neck, followed by the forehead. Although they are classified as vascular malformations, these lesions typically fade with advancing age and are of passing significance.

Venular malformations, known as port-wine stains, are made up of ectatic postcapillary venules. Although they may be manifested as flat pink macules at the beginning of life, they usually darken and thicken with advancing age, forming a cobblestone appearance as the dermal vessels continue to dilate under constant hydrostatic pressure. Their distribution patterns often correspond to dermatomes, and the presumed etiology is deficient or ineffective postcapillary venule innervation.10 Although this is the presumed mechanism, no definitive evidence exists to prove it.

Arteriovenous malformations are rare vascular lesions originating from arteriovenous channels that failed to regress during fetal development.9 A palpable mass with an obvious well-developed arterial supply and dilated tortuous veins are typical features. A murmur may be heard or a thrill may be palpated over the mass. Malformations must be differentiated from arteriovenous fistulas, which are usually precipitated by trauma.

In contrast to dealing with infantile hemangiomas, imaging studies are important in assisting with establishment of an accurate diagnosis and planning of treatment of vascular malformations. Magnetic resonance imaging, angiography, and ultrasonography are important />