Scientific and clinical research in the areas of wound healing and the biomechanics of skin flaps has changed skin flap design from erratic, unsure, and artistic to consistent, scientific, and artistic. Today, skin flap design emphasizes vascular patterns, skin physiology, and the biomechanical characteristics of cutaneous tissue. Because the unique mechanical properties of skin influence blood flow and flap survival, they are integral in the design of local skin flaps. The study of soft tissue biomechanics has increased precision and reliability of local cutaneous flaps, ensuring the use of local flaps as the procedure of choice for reconstruction of small and medium-sized facial defects that cannot be closed primarily.

Unlike many engineering materials, skin is a heterogeneous substance composed of a network of dissimilar materials. Skin is a living tissue, capable of proliferation, change, and response to physical stimulus. It is not surprising that the mechanical properties of skin are unique compared with other materials. For simplicity, skin can be said to have three basic mechanical properties: nonlinearity, anisotropy, and viscoelasticity.

This mechanical behavior of skin is attributable to its heterogeneous nature. Skin is composed of a series of interrelated networks that are intimately entwined. Structurally important components in the dermis include collagen fibers, elastic fibers, nerve fibers, capillaries, lymphatics, and ground substance. Skin without tension has collagen fibers distributed throughout the dermis in a haphazard, diffuse manner. Collagen is woven in a multidirectional array without preferential orientation of thick and thin bundles. Numerous connections between collagen bundles form a continuous network without visible free ends. There are no restrictive attachments among adjacent collagen bundles that seem free to glide, relative to each other. Elastic fibers loop spirally around collagen and attach at multiple points along each bundle. Elastic fibers function as a type of energy storage device, bringing stretched collagen back to a relaxed position. Structural proteins are found in the interstitial fluid that acts as a lubricant enabling movement on the one hand while acting as a buffer to resist rapid change on the other.

A typical stress-strain curve for isolated skin is shown in Figure 3-1. The shape of the curve is similar to stress-strain and force-advancement curves obtained from tests on skin flaps and other soft tissues.1 It is apparent from the graph that skin and skin flaps have nonlinear stress-strain relationships. The mechanical behavior can be divided into three separate regions: (1) an initial flat section in which considerable extension occurs with little force, (2) an intermediate section of rapid transition, and (3) a terminal section where little extension is possible despite great increases in applied force. Histologic examinations of the sequential stages of skin extension provide an explanation for the nonlinear nature of this graph. During initial deformation, randomly oriented collagen and elastic fibers are stretched in the direction of the applied force. Collagen fibers do not bear a significant burden until the bundle is completely straight in the direction of the applied force.1 As a result, there is little resistance to initial deformation, and the stress-strain relationship is nearly linear and elastic (region 1). As deformation progresses, additional collagen fibers are recruited into the load-carrying role and resistance rises. The low stress required for the high strain inherent in region 1 allows the small movements resulting from flexion and extension at joints, enabling freedom of movement and natural facial expression. Region 2 is the strain at which many collagen fibers transition from non–load carrying to a load-carrying role. At high-stress loads (region 3), virtually all the dermal collagen fibers are aligned in the direction of the applied force. At this point, no further deformation is possible because of the inextensible nature of fully oriented collagen. Wholly oriented collagen (region 3) preserves the structural integrity of skin by limiting deformation during accidental stresses.1 Raposio and Nordstrom2 studied the stress-strain curve of human scalp tissue during serial excision of the scalp and found scalp to be initially linear from 0 to 500 g, gradually reduced in compliance from 500 to 1500 g, and rapidly increasing in stiffness from 1500 to 5000 g. 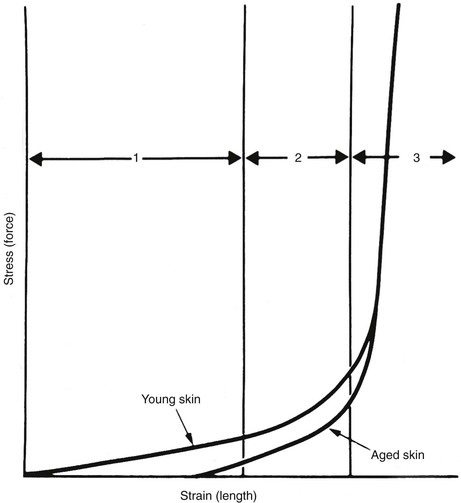 There are enormous individual variations in the extensibility of human skin—differences between the slim and obese, young and old, male and female. The shape of the force-advancement curve is further influenced by edema, inflammation, hormonal conditions, and body weight. It is the variation in skin tension within the same individual, however, that is the most interesting to the reconstructive surgeon. On the face, the skin is lax around the eyes and cheek, whereas it is taut on the nose, chin, and forehead. In each of these locations, there are directional (anisotropic) considerations for skin movement. In most regions of the body, there is skin tension in every direction, but the degree of tension is greatest parallel to the relaxed skin tension lines (RSTLs).3 Pierard and Lapiere4 showed that the presence of skin tension lines depends on the interaction between elastic fibers and collagen fibers and the anchorage of collagen fibers to each other. An incision made at a right angle to the RSTL will gape widely and is more likely to produce a widened or hypertrophic scar. The lines of maximal extensibility (LME) run perpendicular to the RSTLs and represent the direction in which closure can be performed with the least tension.5 Therefore, elliptical excisions should be performed parallel to the RSTLs to place the maximum closure tension parallel to the LME and local skin flaps should be designed so that the donor site closure is parallel to the LME.

RSTLs are not to be confused with Langer’s lines. Langer’s lines of cutaneous tension correspond to the orientation of forces that cause a circular puncture mark in the skin of a cadaver to distort into a fusiform shape. The orientation of Langer’s lines is often distinct from the creases formed in living subjects when the joints are placed in a relaxed position. RSTLs follow the longest and straightest furrows formed when skin is relaxed and are not visible features of the skin. Rather, RSTLs derive from the act of pinching the skin and observing the furrows and ridges that form.3 When skin tension is preserved at the time of biopsy, a small number of extracellular collagen and elastin bundles have been demonstrated to run parallel to the RSTLs.4

When a material resists shear flow and strain in a linear fashion related to time in response to a force, it is said to be viscous. Elastic materials demonstrate immediate strain when a force is applied but return to their original state when the force is removed. Skin exhibits properties of both viscosity and elasticity (viscoelasticity). Skin behaves like an elastic substance only during initial deformation at low stress level (see Fig. 3-1, region 1). At higher stress loads, skin shows viscoelastic properties, and strain becomes a function of both load and time. Two time-dependent properties of skin that are routinely exploited by surgeons are creep and stress relaxation.

Creep refers to the increase in the length of skin compared with the original length when skin is placed under a constant stress (force per unit area). At high-stress loads, a modicum of creep can be achieved in a short time. A small increase in length (strain) occurs as compressed and straightened collagen fibers displace interstitial fluid that is loosely bound to the extracellular matrix (ground substance). When skin is stretched in air, it is possible to see this fluid collect on the undersurface.6 Time is required for fluid to move from one area to another, which explains the time dependence of the process. This mechanism partially explains the biomechanical and histologic changes that occur during tissue expansion, obesity, and pregnancy.

The mechanical properties of skin including nonlinearity, anisotropy, and viscoelasticity are readily observed at a macroscopic level and exploited during reconstructive surgery. It stands to reason that the physical forces applied to skin at the macroscopic level would induce changes at the cellular level. Some of the first evidence of this at a cellular level was provided by Folkman and Moscona7 in 1978. The authors grew cells in culture in varying concentrations of poly(2-hydroxyethyl methacrylate) to control cell shape and, indirectly, cell tension and found that varying shape and tension resulted in differences in DNA synthesis and proliferation. These results suggested that cells sense changes in force and respond accordingly at the molecular level. The mechanism by which these mechanical forces lead to cellular responses came to be called mechanotransduction.

Mechanotransduction requires that cells be able to sense a mechanical stimulus, which in turn leads to the activation of biochemical signaling pathways to achieve the desired end result (i.e., apoptosis, proliferation). Mechanotransduction can act on cells directly, in which the cell senses and acts on the mechanical force itself, or indirectly, in which the force is sensed by other cells, such as sensory nerves, leading to the release of chemical mediators that act on nearby cells.

Direct mechanotransduction is the process by which a cell converts mechanical stimuli into biochemical signals. For a cell to convert a mechanical signal to a bio/>