(In Collaboration with Stella Chaushu)

The indications for the different types of orthodontic appliance

The waiting areas attached to the offices of local dentists, to emergency rooms of general hospitals and to departments of paediatric dentistry of dental schools are places where one will often see young children who have suffered trauma to the lower part of the face and jaws, which may have resulted in fracture or avulsion of the front teeth. By and large, the traumatic incident will have occurred an hour or two earlier as the result of an accidental blow to the mouth during innocent play, a fall or sporting activity, although the attending practitioner should be watchful and alert to the possibility of child abuse. The treatment for the dental condition and any soft tissue lacerations involves the considerable skills of the paediatric dentist, the endodontist and the oral surgeon, and is not within the scope and context of this book. Nevertheless, there is one small corner of the field of traumatic injury in which emergency adjunctive orthodontic treatment may sometimes be of value, and this relates to those injuries in which there has been displacement of the damaged teeth, particularly intrusive luxation. This may be alternatively referred to as the acute, traumatically induced impaction of a previously erupted tooth, and it requires special attention. It will be readily understood that, however successful endodontic and restorative treatments may be in providing for a renewed healthy retention of the tooth in its surroundings, it is with regard to our ability to realign it to its former place in the dental arch that a favourable outcome must be judged and success measured.

This type of injury occurs as the result of a severe blow in the general orientation of the long axis of the tooth, which will drive the tooth upwards into the alveolar process. This results in injury to the periodontal ligament, involving a severance of the gingival and periodontal fibres, which will usually be accompanied by varying degrees of crown fracture and fracture and comminution of the bone lining the socket. In the longer term it will be a major factor in the occurrence of root resorption [1]. The insult to the pulp will cause pulp necrosis in virtually every case where the apex is closed and in about half the cases when the root apex is still open [2]. In the latter, there will often be arrest in further root development [1].

Intrusive luxation may find its resolution in one of three ways:

Following the vertical displacement, an affected tooth may re-erupt and eventually return to its original position [3], particularly if its root apex is still open [1] (Figure 13.1), although some will re-erupt even after root closure. Should the teeth remain intruded after several weeks of follow-up, corrective relocation will be needed. For these cases, some emergency treatment and initial restorative procedures will already have been carried out by the paediatric dentist, endodontist or oral surgeon, and the patient will not be in pain at the time that this assistance is required. However, whether the relocation of the intruded tooth is achieved by orthodontic movement or surgical manipulation, additional insult is borne by the tooth, which would be avoided if the potential for spontaneous re-eruption could be realized [1].

Fig. 13.1 An 8-year-old female following trauma to the lower face. (a, b) Seen four days post-trauma, there is an intrusive displacement of both central and right lateral incisors. (c, d) At seven weeks post-trauma, the teeth have partially re-erupted without orthodontic treatment. 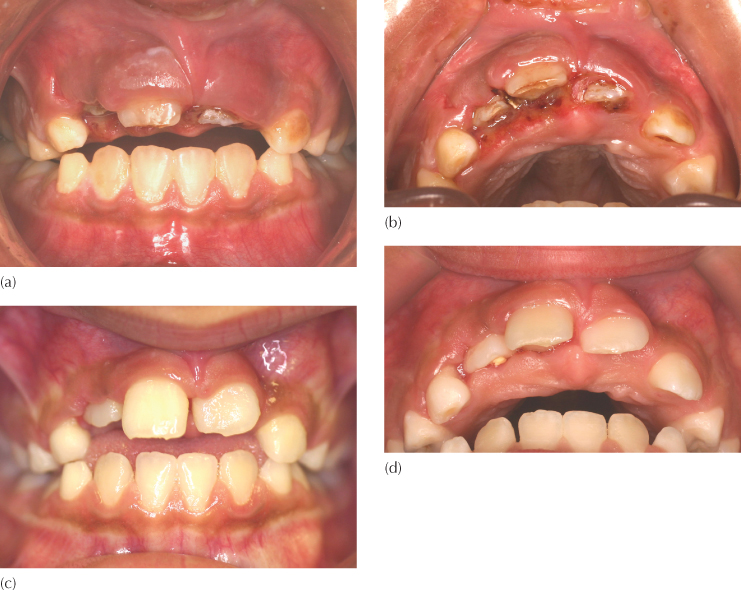 For immediate repositioning of the tooth to be successful, the tooth needs to be gently manoeuvred into its former place and splinted there for several weeks, in the hope that the severed gingival and periodontal fibres will heal to maintain the tooth in its place for the long term. Concern for the future of the tooth is expressed on three levels, namely:

If extrusive forces are applied to an intruded tooth which has few intact periodontal fibres immediately following the traumatic episode, it is highly likely that the tooth will be exfoliated within a very short time. Thus, before initiating traction, it is essential to wait for at least a couple of weeks to allow for healing and the re-establishment of some measure of periodontal support that will hopefully occur with the organization of the blood clot and reattachment of the periodontal fibres.

If, on the other hand, healing is by replacement resorption, there is a direct union between the root and the surrounding bone. Repair will be counted as successful, but the tooth will then never be amenable to orthodontic forces. Sometimes a transient replacement resorption will occur and the tooth may then regain a normal attachment. This is by no means certain, and it is probably more likely that areas of ankylosis will occur over the root surface and the tooth will then remain intruded permanently. In this condition, the tooth is a liability to the dentition; nor is it useful as a foundation for a lasting prosthodontic restoration. An intruded and ankylotic tooth in a growing child will become more and more infra-occluded in relation to the adjacent teeth, and its accompanying bone will also be lacking when compared to the normal vertical development of the alveolar bone surrounding the unaffected teeth. For this reason, there is only limited value in maintaining the tooth as a means of preserving alveolar bone and under these conditions its extraction may often be preferred. Orthodontic intervention at the appropriate time may offer the only viable treatment option, which, together with certain relatively minor restorative procedures, may produce a good result, with a fair prognosis. If the tooth is still completely sub-gingival, then the labial gingival soft tissue will need to be pared back or apically repositioned until 2 mm of the incisal edge of the tooth is revealed. Light extrusive force must be applied after the time that the periodontal fibres have begun to reunite and in the earlier stages of organization of the blood clot, but before the deposition of bone (i.e. 10–28 days post-trauma).

In a meta-analysis designed to evaluate the orthodontic modality of treatment of these cases [2] and which included material taken from other published studies of individual cases and case series reports, there was a 90% rate of successful repositioning of the intruded teeth. As pointed out above, all those teeth with closed apices lost their vitality, together with approximately half those with an open apex. External root resorption was diagnosed in 54.8% of the involved teeth. Marginal bone loss was rarely seen in the patients, which is in sharp contrast to the findings of other studies [1]. Inflammatory root resorption occurred as a late complication in teeth with closed apices, and pulp obliteration was seen in those teeth that remained vital. The ‘take-home message’ from that study was that orthodontic reduction was the most reliable of the three alternatives and was found to be kinder to both hard and soft tissues than the surgical option. It provided the opportunity for a superior outcome in terms of fewer teeth lost and potential complications.

This view is not universally held, since other studies have found little difference in the long-term results between the orthodontic and surgical options, and it has been argued that the extra clinic time and attention needed for orthodontic reduction of the traumatic intrusion does not justify any potential minor difference in the long-term results [1].

Special care must be exercised when using fixed appliances in this situation [4]. First, for any extrusive movement of a single tooth or group of teeth, some kind of resistant framework needs to be bonded to the adjacent teeth, which acts as a multiple anchor unit from which force would be applied to the intruded tooth or teeth. This may take the form of a few brackets and an archwire, although the composite bonding of a customized rigid wire directly to the labial enamel of these teeth (illustrated below) would be more satisfactory from many points of view. Unfortunately, these adjacent teeth will themselves have almost certainly been traumatized at the time of the accident, and using them in this manner may lead to further damage even at the light force levels involved. Second, if the intended extrusion is initiated later than two months post-trauma, ankylosis may have affected the intruded tooth [4]. Active extrusive forces generated by the appliance will then be to no avail. Instead, the reactive forces will be absorbed by the anchor teeth and these will become intruded.

Many children attending for routine comprehensive orthodontic treatment, particularly in the presence of an enlarged overjet, have a history of non-displacement trauma to the maxillary incisor teeth, which have then undergone root canal therapy. The advice usually given is that orthodontic treatment should be delayed for several months, until/>