Morphogenesis and the development of the face is one of the most complex processes in human development. The role of nature versus nurture has long been debated. Proponents of genetic theory claim that growth patterns may arise from the activation and repression of genes that regulate the metabolic activity of differentiated cells, while proponents of epigenetic theories believe that growth control factors may lie in sutures,1 cartilage,2 or functional matrices3 surrounding the craniofacial structures. Others believe that it is the confluence of genetics and external environmental factors that ultimately determines the size, shape, and location of craniofacial structures.4

The role of heredity in the development of one’s phenotypical appearance has been examined through observational studies of monozygotic or dizygotic twins, who have greater similarity in appearance than unrelated individuals.5 The question always has been whether and to what degree the external environment can influence the genetically predisposed size, shape, and direction of growth of craniofacial structures. While some studies6 suggest that the presence of malocclusion can be greatly influenced by environmental factors, others believe its cause is multifactorial.5 Even though it is reported that both Class II and Class III malocclusions may have strong familial tendency,7,8 it may be difficult to estimate the influence of environmental factors in modifying craniofacial growth because the heritability studies of occlusion are typically based on twins and siblings who did not receive orthodontic treatment.

Class II malocclusion is one of the most common problems presenting to orthodontists. Skeletally, a prognathic maxilla, a retrognathic mandible, or a combination of the two is a possible etiology for this malocclusion. Studies in the literature9–12 report that Class II malocclusion is more commonly associated with mandibular retrognathism than with maxillary prognathism. Stahl et al.13 reported that features of a skeletal Class II occlusion develop early in the deciduous dentition and do not tend to self-correct with age, implying that some sort of intervention is necessary to achieve correction. Depending on the patient’s growth status, treatment options commonly include use of functional appliances or fixed functional appliances (FFAs) to enhance mandibular growth, headgear to restrict maxillary growth, camouflage by extraction of upper and/or lower premolars, or surgical correction of the underlying skeletal discrepancy in patients in whom facial growth has been completed.14 The goal of either orthodontic intervention or orthognathic surgery is generally to improve the patient’s dental and facial esthetics, dental function, self-image, and quality of life.

To eliminate patient compliance for Class II correction, the use of non–patient-compliance-based FFAs was first propagated by Emil Herbst in 1905 with the Herbst appliance. The appliance never really gained popularity until Pancherz revived it in the 1970s. Since then there have been numerous modifications of the rigid Herbst appliance28 and various other FFAs29–32 have also been reported in the literature. These FFAs may be broadly classified as rigid, flexible, and semirigid fixed functional appliances. The major difference between functional appliances and FFAs is that the mandible is forcefully postured in an anterior position with FFAs with the help of inter-arch anchorage using the maxillary denture base as the anchor unit.

Using the concept of equilibrium,33 it can be understood that when a rigid FFA is placed in the mouth, the appliance is in static equilibrium. This essentially means that when there is a mesial or forward directed force on the lower arch, there exists an equal and opposite distal or backward directed force on the upper arch. This effect has been proved by cephalometric studies as the “headgear effect”34,35 of FFAs. Apart from the “skeletal” effects on the denture bases, effects on the dentition such as retroclination of maxillary incisors,36 proclination of mandibular incisors,36–38 distalization of upper molars and mesialization of lower molars,37,38 and clockwise rotation of the occlusal plane38 have also been observed with FFAs. Thus Class II correction with FFAs is reported to be due to a combination of skeletal and dental effects.

To accurately diagnose a patient, detailed information is gathered through a chief complaint, medical and dental history, clinical examination, and records that include extraoral and intraoral photographs, models, and radiographic images. An accurate interpretation of the data obtained from all clinical examinations and diagnostic records is made to develop a problem list, on the basis of which treatment objectives are identified and an individualized treatment plan is formulated for each patient.

Orthodontists usually judge skeletal and dental relationships through cephalometric analysis, in which the patient’s characteristics are compared to norms that differ among patient populations based on age, sex, and race. Cephalometric analysis can be performed to evaluate the cranial base, the relationship of the maxilla to the cranial base, the mandible’s size and position relative to the cranial base, the relationship between the maxilla and the mandible, the vertical dimension, maxillary and mandibular dentition, and soft tissue. Table 13-1 provides an example of such analysis. Although the absolute numbers obtained in a cephalometric analysis provide basic information regarding an individual patient, there may be limitations to restricting diagnosis of a patient to numbers only.

A relatively easy, quick, and reliable way to assess the outcome with a functional appliance or FFA is a visualized treatment objective (VTO). The patient is asked to posture the mandible forward, obtaining anterior incisal contact with the posterior teeth in a Class I or super Class I relationship. If the profile of the patient improves, it indicates that the patient may be a good candidate for functional jaw orthopedics (Fig. 13-1). If on posturing the mandible forward the profile does not show improvement, the patient may not be an ideal candidate for a functional appliance and other methods for Class II could be considered or a prefunctional orthodontic phase may be required (Fig. 13-2). As a general rule, a functional appliance (FFA) is most ideally indicated in growing Class II patients who are essentially mandibular deficient, with an average to flat mandibular plane angle and upright lower anterior teeth over the mandibular basal bone with minimal to moderate crowding. 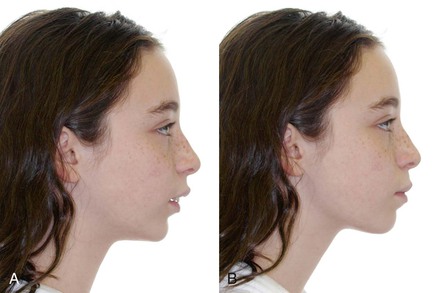 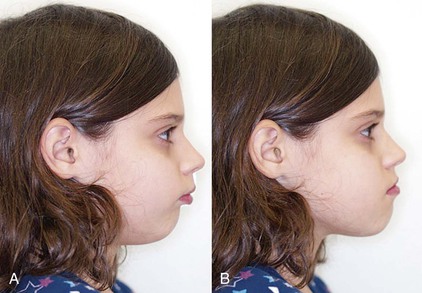 Figure 13-2 A, Profile view of Class II patient before treatment. B, Visualized treatment objective (VTO) of the patient. Note that the soft tissue profile of the patient is not improved, indicating that the patient may not be an ideal case for functional appliances.

The Twin Force bite corrector (TFBC) appliance39–42 is a hybrid fixed push–type, semirigid FFA clamped to archwires in both the upper and the lower arches bilaterally. Each unit is made up of two 15-mm telescopic parallel cylinders (Fig. 13-3). Within the cylinder is a nickel-titanium (Ni-Ti) coil spring that is activated when the patient occludes. A plunger is incorporated at the end of each cylinder on both ends. At the end of each plunger, hex nuts are present to attach the appliance to the archwires mesial to the upper molars and distal to the lower canine. At full compression a force of approximately 210 g is delivered on each side by compression of the coil spring. This force is synergistic to the indirectly applied force by the muscles of mastication due to the forced anterior repositioning of the mandible. 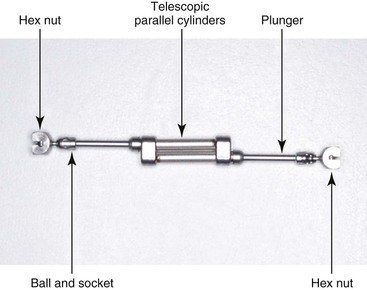 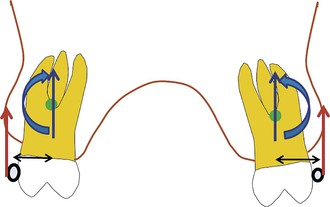 Pre-treatment records for a patient are obtained (Fig. 13-6) and after the initial leveling and alignment phase, the archwires are progressively increased to 0.019 × 0.025-inch stainless steel in the upper arch and 0.021 × 0.025-inch stainless steel in the lower arch (Fig. 13-7, A–C). Both archwires are cinched to consolidate the arches into a single unit to avoid any spaces developing or flaring of the incisors. Additionally, to minimize lower incisor flaring, MBT bracket prescription with –6-degree torque lower anterior brackets is advised. A 0.032-inch × 0.032-inch transpalatal arch is placed to counteract the buccal forces exerted by the TFBC appliance. The standard TFBC version is attached by the hex nuts to the archwires mesial to the maxillary molars and distal to the lower canines, posturing the mandible forward in an anterior edge-to-edge relationship (Fig. 13-7, D–F). 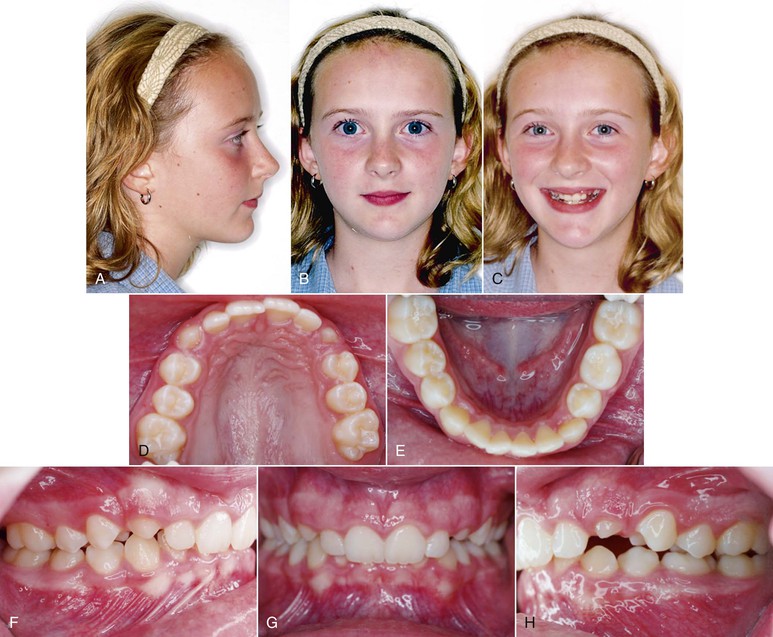 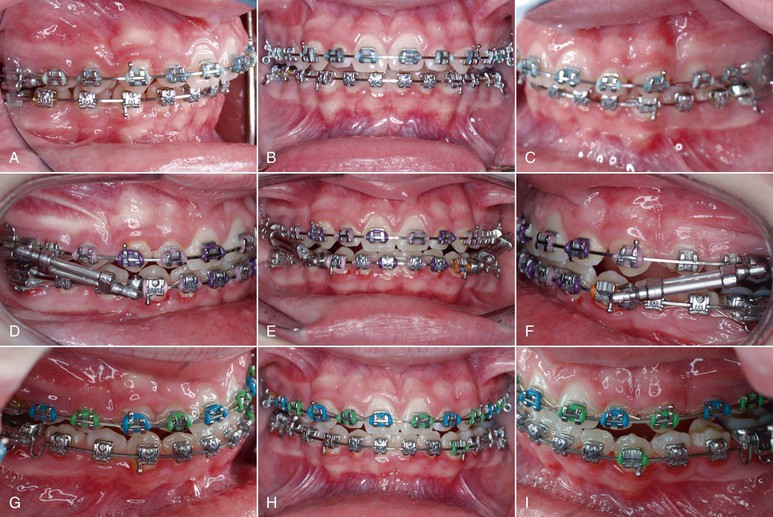 After 3 to 4 months of appliance placement, the patient usually has an overcorrected Class I molar and canine relationship. This helps to overcompensate for any relapse that may occur after appliance removal (Fig. 13-7, G–I). Appropriate finishing and detailing is performed and the patient is subsequently debonded (Fig. 13-8). The retention protocol involves a fixed lingual retainer for the lower arch and a removable wrap-around retainer for the upper arch. 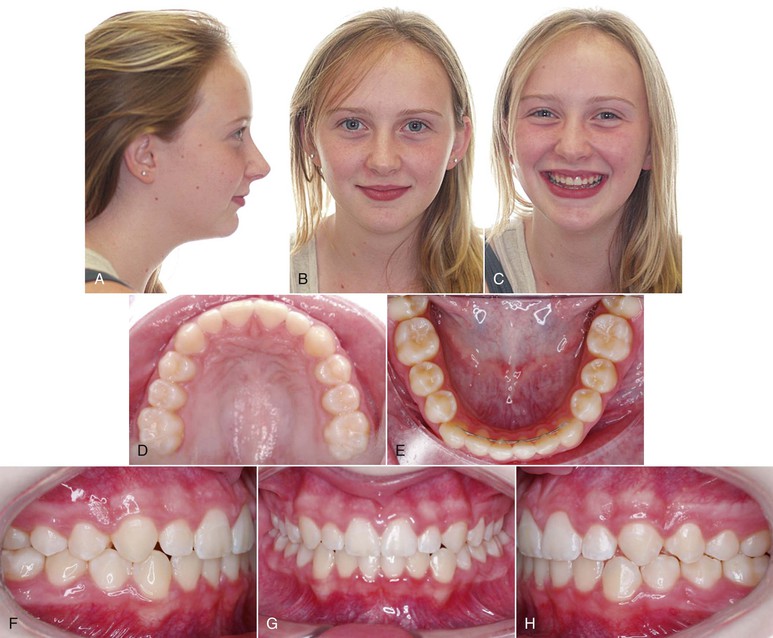 Effects of the TFBC Appliance 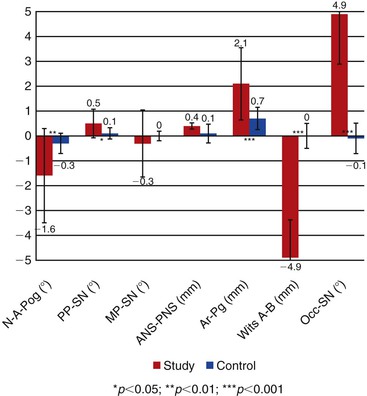 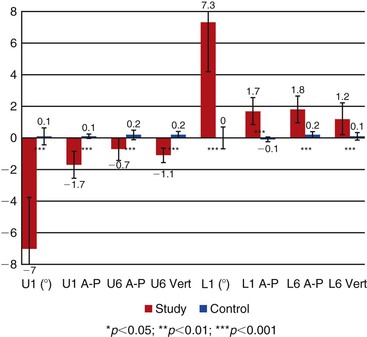