Part 1: The Atraumatic Partial or Full “Balloon” Sinus Lift Using the Subantral Membrane Elevator with or without Concomitant Implant Placement

The posterior region of a toothless maxilla has certain peculiarities that, for many years, limited the possibilities of placing implants. The first obstacle is the low mineralization rate for this bone, an unfavorable factor for basic implant stability (type 3 or 4 in the classification proposed by Lekholm and Zarb 1985). The second obstacle, all too frequently encountered, is the insufficient quantity of available bone. This paucity is caused by dual resorption, both centripetal through periodontal disease or postextraction loss of function and centrifugal through sinus pneumatization.

To correct this centrifugal resorption, various techniques have been described to move and fill the sinus floor and wall. They range from invasive (external or lateral approach) to minimally invasive (internal approach using osteotomes, “balloon” elevation, and piezoelectric Intralift). They all have advantages and disadvantages.

THE EXTERNAL OR LATERAL APPROACH

The lateral approach to treating sinus pathologies was described by Caldwell in the United States in 1893 and by Luc in France 4 years later. Still known as the Caldwell-Luc procedure, this approach is practiced at the level of the canine fossa, a depression of variable depth above the premolars. This osteotomy allows not only curettage of infection but also irrigation, drainage, and observation of the sinus. Despite an increasing tendency toward nasal endoscopy today, the old surgical approach is still employed in parallel with or as an alternative to the endoscopic solution because of the optimal visual access it offers to the maxillary sinus (Chobillon and Jankowski 2004).

In cases where the sinus floor needs to be raised, however, an opening at the level of the canine fossa does not present many advantages. This is a zone where the suborbital nerve surfaces twice, in company with two other intraossary nerves (the anterior superior and intermediary alveolar nerves). Any lesion of the neurofibers contained in the upper third of this floor may give rise to mucogingival allodynia and, in some cases, neuropathic pain (Geha and Carpentier 2006). Moreover, since an osteotomy at the level of the canine fossa is limited by the front wall of the sinus, the opening may be too constricted to allow instruments access to the cavity. As a final consideration, the lowest point of the sinus is generally at the level of the first molar, and this is usually the site that requires raising. It is generally acknowledged that the optimal site for a side opening of the sinus is perpendicular with the first molar.

Although this zone is more practical for the surgeon and much safer from a neurological standpoint, it should be borne in mind that a rich vascular system exists at the level of the lateral wall of the sinus. Two branches of the maxillary artery vascularize this wall: the posterior superior alveolar artery and the infraorbital artery. Each divides into an intraosseous branch in the side wall and an extraosseous branch that vascularizes the periosteum in the molar region. These intraosseous branches anastomose with each other to form a vascular loop known as the alveolar antral artery (Figure 12.1). This is the most voluminous and the most regular of the arteries vascularizing the sinus, contained in the thickness of the lateral wall, either in a bony channel or in a trough that may be recessed into the inside face of the wall or under the sinus membrane. For Geha and Carpentier (2006), this artery is always intraosseous, opposite the first molar, at the base of the zygomatic process and most commonly under the sinus mucous membrane at the level of the canine fossa. Let us now look at The advantages, disadvantages, and possible complications associated with the lateral window approach (see Table 12.1).

Table 12.1. The advantages, disadvantages, and possible complications associated with the lateral window approach.

Figure 12.1 The intraossary branches of the posterior superior alveolar artery and the infraorbital artery anastomose with one other to form the antral artery. 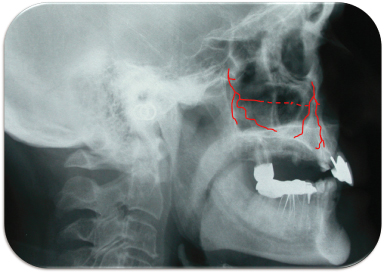 1. Schneiderian membrane perforation: This membrane perforation is the most common complication. It can occur in 11%–56% of the cases. It usually happens at the time of window preparation (especially if rotary instruments are used for membrane access) or at the time of manual instrumentation during membrane elevation. It is interesting to note that the rate drops to 7% with piezoelectric surgery (Wallace and Froum 2007). The unfortunate outcome of a perforation is the lack of containment of the graft material as well as its contamination and possible infection. The action to take in such a case usually depends on the size of the tear and the experience of the surgeon. One approach is to repair the tear by “folding” the Schneiderian membrane “upward” onto itself, using a collagen membrane, and continuing the surgery; the other approach is to abort the procedure, wait 2–3 months, and start again. Waiting will have the advantage of allowing the surgeon to work with a thicker and less friable membrane (scar tissue) at the later date (Barone et al. 2005; Testori et al. 2008; Wallace and Froum 2007).

2. Bleeding: The infra-orbital artery and the posterior superior dental artery form an intraosseous anastomosis in the lateral wall of the maxillary sinus. In 20% of the cases, this vascular structure will be present low enough (15–16 mm from the alveolar crest) that it will interfere with the position of the bony window during surgery. This is particularly true in cases of severely atrophic ridges where the probability of transecting the vessel is high. A very elegant way to circumvent this issue is to use piezoelectric surgery, which will allow a dissection of the artery by “peeling” the maxillary bone away and avoiding a hemorrhage (Figure 12.2; Elian et al. 2005; Mardinger et al. 2007).

3. Presence of septae: Septae have been first described by Underwood in 1910, hence their name “Underwood’s septa.” They are present in about 26% of the cases and are predominant in the middle region of the sinus (50% of the time). They complicate the surgical procedure as they may contribute to membrane perforation. It is of paramount importance to study closely the preoperative computed tomography (CT) scan before undertaking a sinus lift procedure in order to know the exact location and extent of the septae (Kim et al. 2006; Velasquez-Plata et al. 2002).

4. Incision line opening: Incision opening is usually the result of poor suturing and/or lack of control of the immediate postoperative edema by using corticosteroids. It may result in exposure of the collagen membrane and contamination of the graft material.

5. Infection: This will usually follow an opening of the incision line or could be the result of a surgery done on a sinus with an existing nondiagnosed pathology.

Figure 12.2 The alveolar antral artery in submucous position at the level of the first molar. 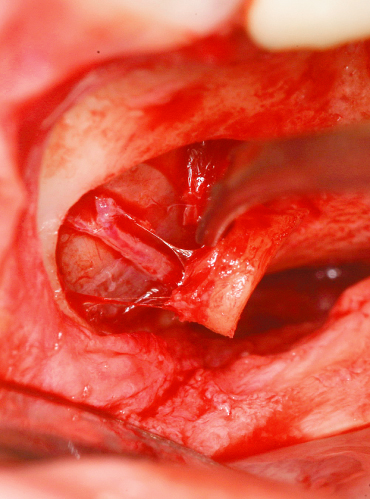 At the annual meeting of the Alabama Implant Study Group in 1977, Tatum described the crestal approach to the sinus. In this technique, a large-size trephine is employed to a depth of around 2 mm short of the bony floor of the sinus. A large osteotome is then used to fracture the floor (Tatum 1977). In a regular sequence, successive loads of bone graft materials are inserted into the osteotomy site and pushed to displace the Schneider membrane. This technique was further described by Summers in 1994. He first used drills to prepare the implant site to within 2 mm of the sinus floor. The drill hole was then packed with bone substitute material and/or recovered bone. This material, together with the subsinus portion of bone and the Schneider membrane, were then progressively pushed back into the sinus with osteotomes lightly tapped with a surgical mallet. The operation was renewed several times with progressively larger osteotomes, and each time the access hole to the sinus was packed with material. In addition to the sinus bone gain, this technique also compacts the area around the implant site, thereby increasing basic stability. To be successfully paired with simultaneous implant placement this technique requires at least 5 mm of original bone. Toffler (2004) reports 26.7% implant failure when residual bone height was 4 mm or less and 5.1% failure when 5 mm or more. Let us look at the advantages, disadvantages and possible complications of the internal osteotome-facilitated approach (Table 12.2).

Table 12.2. The advantages, disadvantages, and possible complications of the internal osteotome-facilitated approach.

Over recent years, piezoelectrical surgery has continually gained ground over standard bone surgery. As part of this process, 2007 marked the appearance of insert kits designed to raise the sinus floor by the crestal approach. These inserts were developed by the scientific group of Troedhan, Kurrek & Wainwright (TKW) and the Acteon Group in France. The resulting technique is called the IntraLift, and the tips used are TKW1, TKW2, TKW3, TKW4, and TKW5.

The IntraLift is thus a technique for raising the sinus floor via the crestal approach, using ultrasonic tips to first pierce an access hole to the sinus floor and then to hydrodynamically push back the Schneider membrane.

Unlike the Summers technique, the IntraLift procedure does not automatically call for immediate installation of the implant. Thus, the required minimum height of 5 mm is no longer necessary for securing this installation. Indeed, the authors mention the possibility of employing their technique with crestal heights below 3 mm. This means that the technique can be adopted, with immediate or deferred insertion of the implant, to raise and fill precise sections of the sinus membrane.

One of the major advantages of this technique resides in the fact that, by avoiding an osteotomy of the lateral wall, it precludes any of the complications associated with this approach and notably any rupture of the alveolar antral artery in cases where it follows an intraossary course. In view of the absence of vessels in the alveolar crest and the limited vascularization of the sinus membrane, all risk of hemorrhage is avoided with the IntraLift procedure.

In cases where the site requiring filling is narrow and bordered by teeth, the lateral approach entails the danger of damage to their roots. This being so, the window is generally very small, offering poor visibility and only limited access for instruments (Figure 12.3). When detaching the Schneider membrane, these instruments run the risk of sectioning the neurovascular bundles at the apex of neighboring teeth if they emerge into the sinus.

Figure 12.3 Too narrow a window can curtail use of instruments (7-mm sinus curette) inside the sinus. 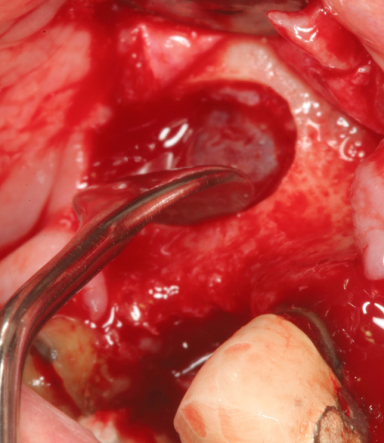 Thus, the IntraLift technique is indicated in those cases in which the toothless gap is limited, access drilling presents no risk for the roots of neighboring teeth and the detachment of the sinus membrane is achieved by hydrodynamic action rather than through use of potentially aggressive and cutting instruments.