Synthetic polymers have been of importance for 60 years or more and find use in almost every sphere of modern life. Prior to the realization of the importance of such products they were often discarded as unwanted byproducts of other chemical processes.

Polymers are high molecular weight, chain-like molecules. A polymer chain does not consist of a random arrangement of atoms, but of distinct repeating groups of atoms, derived from the small molecules or monomers from which the chain is built up. The process by which monomers are converted into polymers is called polymerisation.

Monomers are generally liquids or gases and during the process of polymerisation they become converted to crystalline or amorphous solids. These may vary from being very rigid at one extreme to being soft and rubbery at the other.

The conversion of monomer molecules into polymers may proceed by either an addition reaction or a condensation reaction.

An addition reaction simply involves the joining together of two molecules to form a third, larger molecule. For example, ethylene reacts with bromine under the correct conditions to form dibromoethane, as follows.

Addition polymerisations involve the addition of a reactive species with a monomer to form a larger reactive species which is capable of further addition with monomer. In simplified terms the reaction may be visualized as follows:

The initial reactive species is represented by R* and the monomer molecules by M. It can be seen how monomer molecules are added during each stage of the polymerisation reaction and eventually a long-chain molecule is produced.

The reactive species which is involved in the addition reaction may be ionic in nature or it may be a free radical. Free radical addition polymerisation is very commonly used for the synthesis of polymers and is the method used in many dental polymers. The free radicals are produced by reactive agents called initiators. These are, generally, molecules which contain one relatively weak bond which is able to undergo decomposition to form two reactive species each carrying an unpaired electron. One very popular initiator, which is used extensively in dental polymers, is benzoyl peroxide. Under certain conditions the peroxide linkage is able to split to form two identical radicals as shown in Fig. 12.1. The decomposition of benzoyl peroxide may be accomplished either by heating or by reaction with a chemical activator. The use of a chemical activator allows polymerisation to occur at low temperatures. Activators commonly used with peroxide initiators are aromatic tertiary amines such as N, N′ dimethyl-p-toluidine (Fig. 12.2).

An alternative activation system involves the use of radiation to cause decomposition of a suitable radiation-sensitive initiator. For example, benzoin methyl ether decomposes to form free radicals when exposed to ultraviolet radiation. Certain ketones, when exposed to radiation in the visible spectrum range and in the presence of a tertiary amine, are capable of forming active radicals which can initiate polymerisation.

The majority of monomers which can be polymerised by a free radical addition mechanism are of the alkene type. That is, they contain a carbon–carbon double bond. These monomers can be represented by the general formula given in Fig. 12.3. Some of the familiar monomers which can be obtained by substituting for X and Y in the figure are also given. Methylmethacrylate and other closely related monomers are of particular importance in dentistry.

Activation: This involves decomposition of the peroxide initiator using either thermal activation (heat), chemical activators or radiation of a suitable wavelength if a radiation-activated initiator is present. For benzoyl peroxide the activation reaction is represented by the equation given in Fig. 12.1. In simplified, general terms it may be expressed as follows:

Initiation: The polymerisation reaction is initiated when the radical, formed on activation, reacts with a monomer molecule. This is illustrated for the specific case of the benzoyl peroxide radical and the methacrylate monomer in Fig. 12.4. The reaction may be given in simplified general terms as follows:

where the symbol M represents one molecule of monomer. It can be seen from the above equation and from Fig. 12.4 that the initiation reaction is an addition reaction producing another active free radical species which is capable of further reaction.

Propagation: Following initiation, the new free radical is capable of reacting with further monomer molecules. Each stage of the reaction produces a new reactive species capable of further reaction, as illustrated in the following equations:

A general equation for the propagation reaction may be written as follows:

where the value of n defines the number of monomer molecules added and hence the length of the chain and the molecular weight.

One example of termination is the combination of two growing chains to form one dead chain as follows:

Other examples of termination involve the reactions of growing chains with molecules of initiator, dead polymer, impurity or solvent, if present.

Factors which have an important influence on the properties of the resulting polymer are molecular weight and the degree of chain branching or cross-linking.

Fig. 12.3 General formula for alkene molecules which are capable of polymerizing to form polymers. Examples of some specific monomers are given.

Molecular weight: Within any addition polymerisation system, activation, initiation, propagation and termination reactions occur simultaneously and the resulting polymer is therefore composed of chains of varying lengths. Thus, it is not possible to define a precise molecular weight for polymers and they are normally characterised in terms of an average molecular weight.

Chain branching and cross-linking: Addition polymerisation reactions generally lead to the production of linear polymers. This does not imply that the chains form straight lines but simply that there are no branches off the main polymer chain and that the chains are not linked together. 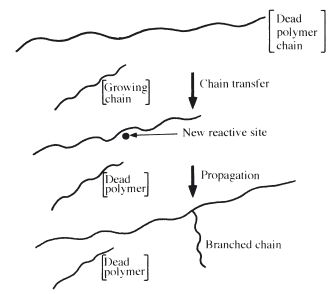 Chain branching and cross-linking can have important effects on the properties of polymers.