The root canal system of human teeth may be extremely complex. Still, in spite of the irregularities, all groups of teeth have a general pattern in their root canal morphology. Virtually all teeth have main root canals and it is the main canals that we instrument and obturate during endodontic treatment. Lateral and accessory canals are influenced by irrigants and antiseptics, and only in rare instances will the outcome of the treatment depend on whether an accessory canal is actually obturated or not. This is the case even if an endodontic lesion clearly originates from a lateral root canal. If adequate chemomechanical instrumentation and disinfection are carried out and the main root canal is filled, the lateral periodontitis will heal even if the lateral canal is not filled (Fig. 12.1). This is an extremely important concept in endodontics, and without this concept, root canal treatment has no logical foundation. Therefore, the root canal morphology of the teeth as it pertains to clinical endodontic therapy will be discussed. 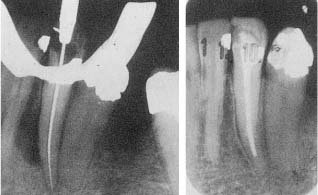 a Radiograph of a nonvital mandibular canine with lateral periodontitis.

b At the 2-year control there is resolution of the lateral radilucent lesion. Note that a possible lateral canal going to the lesion has not been instrumented or obturated.

The access cavity is prepared with long-shank round burs and the point of entry is on the palatal surface of the tooth, slightly incisal to the singulum. The bur is held at an angle of about 30 to the long axis of the tooth and the long shank is helpful in aligning the bur correctly. When an opening to the pulp chamber has been achieved, the access cavity is enlarged mainly with outward strokes of the bur to reflect the size and shape of the pulp chamber (see p.179). It is very important to include the pulp horns in the cavity so that all tissue and discolored dentin are removed to prevent discoloration of the tooth. A round bur no. 2 is used for this purpose. Also, the root canal has a definite cervical constriction that should be removed before the actual root canal instrumentation begins. This is done with a long, tapered, diamond-coated bur, a Gates-Glidden, or similar bur. The apical part of the root canal is circular in shape and a circular apical box may be readily prepared in this tooth.

The access cavity is prepared with long-shank, round burs as described for the maxillary central incisor. The lateral incisor typically has a wide root canal in a narrow root. Thus, the diameter of the canal in the apical 5 mm of the root is generally wider than both in the maxillary central incisor and the maxillary canine. However, the most apical part of the canal has a fairly round shape, so that a circular apical box may be prepared in lateral incisors. Still, it must be understood that the canal of these teeth should be enlarged considerably more in the apical area than would normally be expected judging by the size of their roots.

The root of the maxillary lateral incisor is frequently curved apically, often in a palatal direction so that the curve may not be apparent in a radio-graph immediately. Although the curved canals are generally narrower than the canals in lateral incisors with straight roots, they are still wide and may be difficult to instrument adequately. As a result, historically speaking, endodontic treatment of the maxillary lateral incisor has failed more than in any other tooth. However, the use of flexible nickel-titanium instruments has made it easier to instrument wide, curved canals without perforations, canal transportation, or other mishaps. 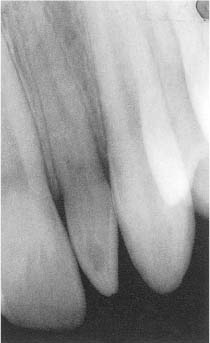 Fig. 12.4 Radiograph of a maxillary lateral incisor with enamel invagination in a 16-year-old.

Enamel invagination and dens in dente occur most often in the maxillary lateral incisor (Fig. 12.4). These malformations may allow penetration of bacteria to the pulp and endodontic treatment of these teeth will frequently be necessary. The practical approach will depend on the clinical and radiographic findings and the degree of irregularities of the tooth. Often a surgical intervention with retrograde fillings to support the best possible orthograde obturation of the root canals will be necessary.

The access cavity is prepared with long-shank, round burs as described for the maxillary central incisor. The maxillary canine is the longest tooth in the dentition and teeth 30mm and longer are occasionally seen. The root canal is straight and circular in shape and only a very slight apical curvature of the root is sometimes seen. A circular apical box may be readily prepared, and this tooth lends itself exceptionally well to treatment with the standardized technique. On extremely rare occasions, the maxillary canine may have two root canals.

The maxillary first premolar has, as a rule, two root canals. The pulp chamber is elongated in a buccopalatal direction and the orifices of the canals are located slightly centrally to the buccal and lingual cusp tips. The access cavity is prepared with a long-shank, round bur directed at the long axis of the tooth with the point of entry in the middle of the occlusal central groove. When the pulp chamber has been penetrated, the bur is used in the normal manner with outward strokes to remove the tooth structure overhanging the pulp chamber. The shape of the floor of the pulp chamber will usually indicate the number of canals. If one canal is present, it is located centrally in the tooth. If two canals are present, they are usually further apart, i. e., further buccally and palatally than perhaps would be expected. Teeth with three canals have two buccal canals and one palatal canal. Most maxillary first premolars have a distinct concavity in the mesial root surface, increasing the risk of mesiocervical perforations during access preparation. The cusps of this tooth are often weakened when endodontic treatment is indicated, and their height should be reduced or they should be strengthened with a bonded restoration prior to endodontic treatment to prevent uncontrolled crown-root fractures.

The root canals of the maxillary first premolar vary considerably in width, and the variations are not necessarily related to the diameter ot the root. Endodontically, this is a difficult tooth, and more failures are found with it than with any other tooth except the maxillary lateral incisor. To improve upon this, it is necessary to understand and accept how wide the apical part of the root canals can be in the maxillary first premolar and to instrument them accordingly. This requires both patience and skills in the narrow and often curved roots of this tooth. However, a circular apical box can most often be prepared and the use of flexible nickel-titanium instruments is helpful.

The maxillary second premolar usually has one root and one root canal. The pulp chamber is elongated in a buccopalatal direction, and the access cavity is prepared as described for the maxillary first premolar. The coronal part of a single root canal is ribbon-shaped. It tapers off and takes on a circular form in the apical third of the root. In about 10–15% of the teeth, a single canal splits into two canals in the apical 3–4mm of the root. When two canals are present, their orifices are located buccally and palatally, centrally to the cusp tips, as in the maxillary first premolar. The two canals may occasionally join apically, but as a rule they have separate apical foramina. When three canals are present, two are located buccally and one palatally. These canals are narrow and may be difficult both to locate and to instrument. Otherwise, the maxillary second premolar is easier to instrument than the first premolar, also when two canals are present, and in most instances the canals can be given a circular form in the apical area.