Positioners and tooth aligners have long histories of use by orthodontists to achieve minor corrections. However, using computer-assisted design and manufacturing technologies, several companies (e.g., Invisalign) have been able to provide a service that has made the approach feasible for a wider variety of corrections and patients than was previously possible. In addition to orthodontists, these services have been intensely marketed to nonspecialists and even directly to the public. The latter efforts have placed clinicians in the position of needing to become familiar not only with the evidence that supports the various strategies employed in treating malocclusions with these appliances but also with the evidence related to its effectiveness, risks, and benefits compared to no treatment or standard treatment with fixed appliances. A recent systematic review (Lagravere & Flores-Mir 2005) found only two studies that met their inclusion criteria (randomized clinical trials [RCTs]) and therefore could only state that “… no strong conclusions could be made regarding the treatment effects of Invisalign appliances. Future prospective randomized clinical trials are required to support, with sound scientific evidence, the claims about Invisalign’s treatment effects. Clinicians will have to rely on their Invisalign clinical experience, the opinions of experts and the limited published evidence when using Invisalign appliances.”

The purpose of this study is to update this systematic review and also to include an analysis of the lower-quality evidence. The latter would demonstrate how useful data could be extracted from these types of studies while providing further guidance for evidence-based practice.

A search strategy was developed for MEDLINE and revised appropriately for other databases, i.e., Web of Science, EMBASE, and Cochrane. The search terms were Invisalign, malocclusion, aligners, and clear appliances/braces. Searches covered 1966–August 2009. Ninety-three articles were retrieved from these searches (Figure 11.1). Two authors (JB and SH) independently reviewed the titles and abstracts of these papers, and discrepancies were resolved by further review and discussion with the other authors (GK and AB). Seven papers were found to be duplicates and were eliminated, reducing the number to 86. All abstracts were read to determine if they met inclusion/exclusion criteria and discrepancies resolved as described above. Excluded were letters/commentaries, expert opinions and gray literature (i.e., continuing dental education and conference presentations without published abstracts and unpublished reports with or without industry sponsorship). Included were all published reports (i.e., systematic reviews, RCTs, cohort and cross-sectional studies, case-control studies, case series, and case reports). Forty-nine more papers were excluded based on these criteria, leaving a total of 37 articles that were reviewed in full. The bibliographies of these articles were also scrutinized for further relevant articles. After full text review, 5 more articles were excluded based on the selection criteria. Data were then extracted from the remaining 32 articles.

All papers were categorized by experimental design. Systematic reviews, RCTs, and cohort and cross-sectional studies were examined for aims and conclusions, noting the sample sizes (see Tables 11.1 and 11.2). Because of the heterogeneity of their aims and methods and the small numbers of studies in these categories, it was not possible to conduct further data extraction from them. 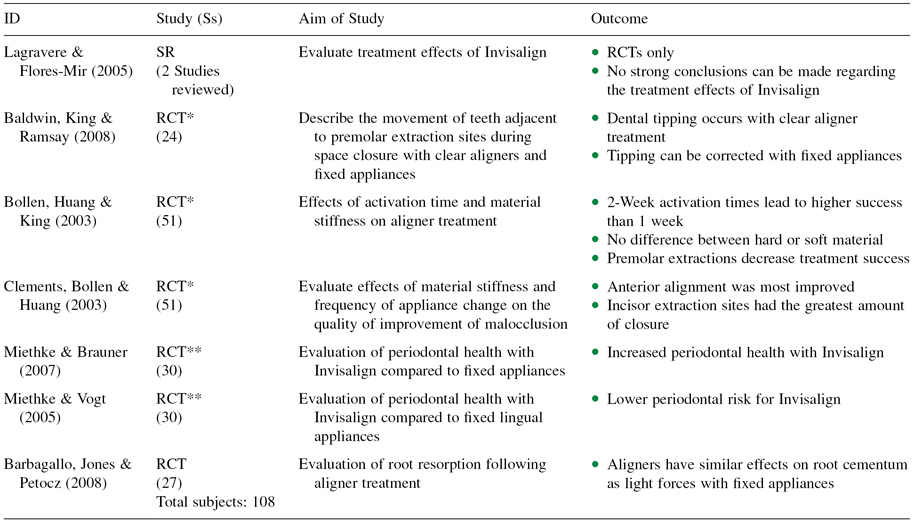 *Multiple reports from one patient pool.

**Multiple reports from one patient pool. 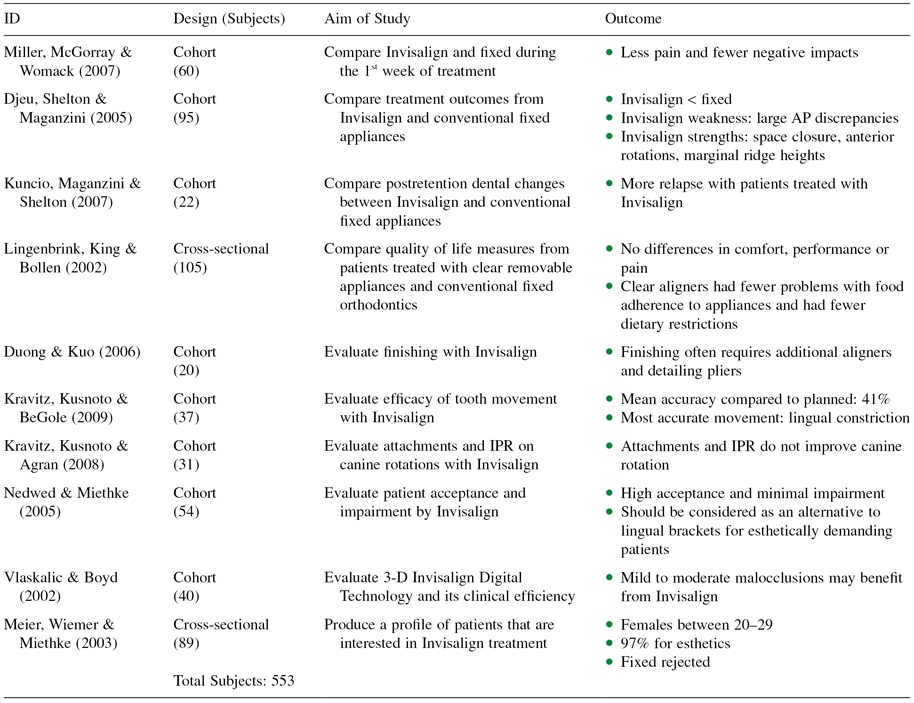 All case reports and case series were examined for type(s) of malocclusions treated. It was also possible to note the treatment time and the requirement to use adjunctive procedures to achieve the reported results. We used the Index of Complexity, Outcome and Need (ICON) (Daniels & Richmond 2000) to assess the complexity of these cases. One blinded investigator (GK), who was trained by the developer of the ICON (Stephen Richmond) and successfully scored a set of 30 models with known scores, which is used as a calibration set. He was able to score these using the initial records presented in these articles. Blinding was done by one author (JB), selecting and coding the initial photographs from each article.

The ICON has been validated based on the subjective judgments of 97 orthodontists from nine countries on 240 initial and 98 treated study models. Intra-oral photographs can also be used to satisfactorily score malocclusion using the ICON. The index was created as a single measure of treatment need, complexity and outcome. ICON has two advantages in this context. It has an esthetic component that is weighted highly by clinicians and valued by patients, and it has clear and internationally validated cut points for treatment need and outcome with categories for complexity and improvement. Five weighted measurements—dental esthetics, crossbite, anterior vertical relationship, upper arch crowding/spacing, and buccal segment anteroposterior relationship—compose the components of the ICON. These weighted scores are summed to derive a total score used in analyses. The components were individually scored from the publication photographs and multiplied by their respective weights to yield a single summary ICON score. The median and standard deviations of these scores were calculated. The final scores also were used to determine pretreatment case complexity (easy = <29; mild = 29–50; moderate = 51–63; difficult = 64–77; very difficult = >77). The prevalence of cases in each of these categories was then calculated and the distribution displayed in a histogram (Figure 11.2). 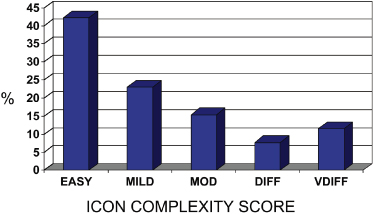 The primary outcome for this project was the effectiveness of Invisalign in correcting malocclusions. This included the measures cited (i.e., case complexity, treatment time, need for other treatment approaches, and stability). The secondary outcomes included quality of life, pain, periodontal considerations, and root resorption. The latter were done qualitatively because there were few reported quantitative data and the numbers of studies addressing these criteria were few.

Seven of the 32 articles reviewed for this study had research designs that are generally considered to provide the highest-quality evidence (Table 11.1). One systematic review was identified. Because this study only included RCTs, and these were relatively rare, the authors could only conclude that the evidence was inadequate and thus was not much use as an evidence base for practice (Lagravere & Flores-Mir 2005).

The six papers with RCT designs actually consisted of only three groups of patients. One RCT had a total of 51 patients (Baldwin, King & Ramsay 2008; Bollen, Huang & King 2003; Clements, Bollen & Huang 2003) comparing differing strengths of thermoplastic material and reactivation schedules. These papers reported no difference in outcome (i.e., need to retrack the planned treatment schedule) based on the materials used and that a 2-week reactivation scheme was more effective than 1. The study also found that Invisalign was effective at aligning anterior teeth and closing anterior extraction spaces, but premolar extraction cases were less successful, and a subset of the patients requiring premolar extraction (n = 24) experienced significant amounts of dental tipping around extraction sites (Baldwin, King & Ramsay 2008). The latter could be recovered, however, with />