The context of impacted canines vis-à-vis the lingual appliance

Differences in treatment approach engendered by the use of lingual appliances

The Context of Impacted Canines vis-à-vis the Lingual Appliance

In a Medline search of the English-language orthodontic literature, only one article was found that describes the use of lingual appliances in the treatment of impacted teeth in adults [1]. This is rather surprising in the light of the growing demand for facial and dental aesthetics by adult patients, and in view of the fact that lingual orthodontics has become established as a well-recognized and widely accepted discipline. It is nevertheless understandable because, in the treatment of the cases under discussion, an orthodontic appliance may need to execute as many as five different movements on the impacted tooth, involving vertical extrusion, tipping to the line of the arch, rotation, mesio-distal root uprighting and buccal root-torque (see Chapter 6). Achieving these with a lingual appliance is still considered to be more difficult by most clinicians, who would undoubtedly prefer to treat cases requiring these complex manipulations with the more familiar labial appliances.

In Chapter 9 it was pointed out that the prognosis for the success of the orthodontic resolution of the impacted canine in an adult is lower than in the young patient and that it worsens with advancing age. Furthermore, when such treatment is undertaken, its successful completion should be expected to take considerably longer than in younger patients [2]. For this reason, it is important to find creative ways to shorten the whole treatment, especially that part of treatment related to the canine impaction.

Differences in Treatment Approach Engendered by the Use of Lingual Appliances

Changes and adaptations need to be made to the protocols for the treatment of impacted teeth, which have been suggested in earlier chapters of this book in line with the demands of each of the various stages of treatment. Several problematic areas arise, and it is necessary to show how these may be overcome using the lingual appliance.

Following accurate positional diagnosis and a carefully planned strategy for erupting the impacted tooth, the lingual appliance will be bonded into place. Its aims will initially be directed at levelling, alignment and space-opening for the impacted tooth. These goals may be realized in the present context with the help of copper–nickel–titanium (CuNiTi) archwires initially, followed by a heavier steel archwire, an open coil spring and sliding mechanics (Figure 10.1). 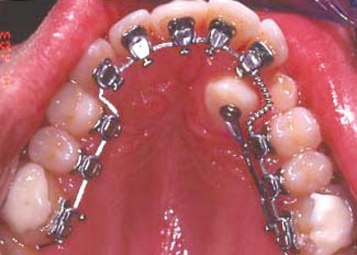 The space achieved must then be maintained until the impacted tooth has been initially aligned in the arch. With labial appliances, the use of a gently curved stainless steel tube threaded on the wire has been recommended to act as the space maintainer (see Chapter 6). However, this is not feasible in the lingual appliances, because of the need for a premolar offset. Therefore, in lingual treatment, space is usually maintained with a closed coiled spring (Figure 10.2) or with a pair of offsets distal to the lateral incisor and mesial to the first premolar, or by ‘figure-of-eight’ ligation of the teeth on either side of the space. At this stage, the patient is referred for surgical exposure of the impacted tooth. 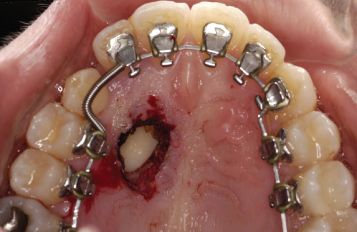 The closed eruption technique also results in less postoperative discomfort for exposures in the palate [5]. However, a closed eruption procedure for a palatal canine generally requires an intra-sulcular incision along the cervical margins on the palatal side of all the teeth, with the flap raised from first molar forward. In the presence of a lingual appliance, this procedure is clearly difficult to perform, since the brackets and their hook attachments are adjacent to and extend deeper than the cervical margins, obstructing access. Removing the archwire is mandatory prior to surgery, which complicates its postsurgical replacement and the application of traction.

The alternative approaches are:

In cases in which traditional labial orthodontic appliances are employed, direct traction to the archwire is often the most efficient line of treatment and is best achieved using elastic ties from the impacted tooth across the line of the arch to the labial side. However, with lingual appliances the distance to the lingual archwire is very short and direct traction is rarely appropriate, except in the early eruption phase of the traction. Following eruption, the lingual wire becomes an obstacle in the way of further progress of the canine. A buccal offset with a helix may be incorporated in the canine area of the lingual archwire to increase this distance and the range of the elastic (Figure 10.3). A palatal offset may also be used, in which the archwire is designed to circumnavigate the canine on its medial side and close to the palatal midline raphe, while labial/buccal traction will need to be made to a small buccal attachment on a posterior tooth (Figure 10.4).

Fig. 10.3 Elastic thread tied between the buccal eyelet of the impacted canine and a loop in the buccal offset of the lingual archwire. 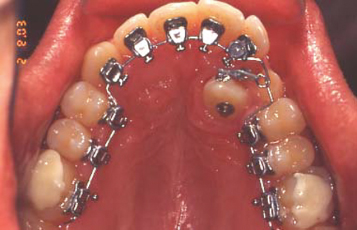 Fig. 10.4 Elastic thread tied between the buccal eyelet of the impacted canine and an attachment bonded on the buccal aspect of the first molar (unseen). A palatal offset has been inserted in the lingual archwire. 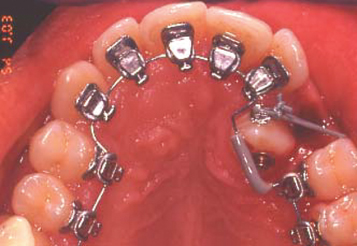 In group 2 canine cases, the intimate relation between the canine crown and lateral incisor root will block the canine movement if direct traction is applied, while in group 3 canines the height of the tooth may contraindicate the use of direct buccal traction. Therefore, the canine must be erupted first in a vertically downward and somewhat palatal movement in order to free it from its entanglement with the incisor roots, as has been amply demonstrated in earlier chapters. An appropriate canine auxiliary should be prepared to be placed at the time of surgery as in a labial approach, such as a suitably modified full auxiliary arch [6]. Again, due to the considerably shorter distance between the impacted tooth and the lingual archwire, the range of action will be significantly decreased and there is the risk of inadvertently applying excessive extrusive forces (Figure 10.5). Therefore, the auxiliary should be made from lighter wires or its activation range should be decreased. This spring is inserted piggyback under a lingual heavy rectangular base arch – the latter having been placed to consolidate the anchor unit, while the spring provides a light extrusive force to the canine. In this way, unwanted movement on the adjacent teeth will be avoided. Alternatively, a light active palatal arch (see Chapter 6) may be used in combination with lingual appliances, although it requires double molar tubes. Preferably, these should be welded to preformed orthodontic bands, although the bands themselves may not be acceptable by the patient for aesthetic reasons, despite the fact that they are so distally sited in the mouth. 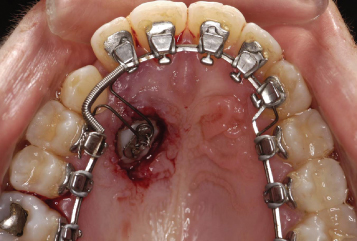 Once the canine has erupted in the palate, it must be moved buccally towards its place in the arch and the same means may be used as described above. Vertical offsets, designed to erupt the tooth, are limited by the likelihood of impingement by the occlusion of the lower teeth. However, during movement towards the buccal, occlusal interferences with the opposing teeth, which are sometimes encountered when a labial appliance is used, are obviated by the bite-opening effect of the lingual appliances, which elimina/>