The aim of this chapter is to consider how to remain assertive in the face of aggressive and non-assertive behaviour from other people in the workplace.

Assertive behaviour can help in making an individual a happy, effective team member. It must be recognised, however, that assertiveness can, on occasions, be a risk when other people behave aggressively or non-assertively. This chapter concentrates on how to remain assertive when others are trying to adversely influence your behaviour.

Most people find it difficult or uncomfortable being the subject of aggression from others. Responding to aggression in a way that defuses the situation, and hopefully goes at least some way to resolving the cause, is an important skill (Fig 10-1). 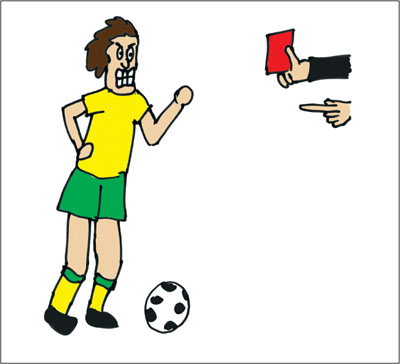 There are two levels of aggression that can be clearly identified.

The aim of handling colleague’s aggression is to deal with the issues and feel positive about the interaction afterwards. Outlined below are steps to be taken in standing your ground in the face of aggression. The main aim is to defuse the aggression in the aggressor.

The first step is critical. Mustering and maintaining resolve at this stage increases considerably the chances of responding assertively. Taking a few, slow deep breaths buys you critical seconds to gather yourself and your thoughts for your response. In addition, a few more seconds of thought can be achieved by using starters such as ‘Yes’, ‘Well, OK’ or ‘I appreciate you have a problem’. Slowing everything down from the outset greatly reduces the risk of your initial response triggering even more aggression from the aggressor.

When people are being aggressive towards you, it is possible that they take you by surprise. Their words tend to come out very quickly and may not even be coherent. Following the initial tirade, begin to respond by asking questions in an assertive manner. To do this, keep your voice firm, clear and evenly paced. Slowing your response down may even encourage the other person to slow down, diffusing their anger, allowing you to begin to understand the issue. Start asking questions. This usually has an effect on the aggressor, as they will have to listen to your questions and think of answers. Slowing things down creates thinking time for both parties, with the possibility of the aggressor toning down the attack.

Sometimes, the aggressor may be so pent up that you are unable to get a word in edgeways. If this is the case, do not interrupt, let the aggressor get the matter off their chest; eventually they will run out of steam. Once this has happened, the exchange has a better chance of becoming an ‘assertive–assertive one’.

Some questions that you may consider asking include:

If at this stage, the aggressor remains aggressive, with little if any let up, encourage a full airing of the grievance before moving on to step three:

At the third stage, you should begin to say more about where you stand on the issue, while at the same time showing that you understand the other person’s position. The aggressor may well begin to feel that they are getting through to you, even though you have indicated that your position differs from theirs. This will not necessarily stop the aggressor from trying to influence you, but at least it will be done in a less heated manner. If this happens, the aggressor’s behaviour should become less aggressive and more assertive. Ways of stating your standpoint assertively could be to make the following types of statement:

The responsive behaviours in steps two and three form a powerful combination. Faced with such assertion, it is often difficult for people to continue to be aggressive. If, however, the person continues to be aggressive, you move on to step four.

If the aggressor persists with, or reverts to their aggression, then it is time to step up your assertion. Here you put the emphasis on your position.

The first option may simply be to repeat your earlier assertive statement in respect of your position, or you may wish to change your statement in light of the new information you have gained as a result of asking questions. To give strength to the restatement of your position, slow it down and lay emphasis on the key words, especially if you feel that the aggressor has ignored you earlier.

An alternative at this stage is to point out that past agreements, stemming from aggressive behaviour, have been broken, or that the other person’s behaviour is unacceptable. For example, it may be appropriate to say:

If you have worked at being assertive, with no change in the aggressor’s aggressive behaviour, you may begin to experience strong feelings of frustration, resentment or annoyance. These strong emotions can be a barrier to your own assertiveness and may lead to you becoming aggressive or non-assertive. It is, therefore, important to appreciate when to express your feelings to the aggressor.

Alternatively, you may feel it important to state the consequence of the continued aggressive behaviour, by saying, for example:

At this stage, the other person will hopefully see that you mean business.

If all your efforts have been to no avail, you may be thinking, ‘Well that’s it, I’ve tried everything else, now, I can become aggressive without feeling guilty’. You still, however, have two options open to you. The first option is to cut off the interaction. You may already have warned the aggressor of this in the previous step. A simple statement such as, ‘I don’t feel we are making any progress. Let’s meet again soon, when we have both had time to reflect’, may be sufficient.

Cutting off the interaction alerts the other person to the effect of their behaviour on you. Also, it makes it clear to them that you are not prepared />