A basic understanding of the development, structure and relationship of the tissues and structures which constitute the oral cavity and its associated environment is fundamental to the practice of clinical dentistry. It enables the clinician better to appreciate how subsequent pathology change may be influenced by adjacent anatomical structures or tissues and therefore helps to provide a better understanding of the rationale for potential treatment options.

Development of the face

Development of the palate

The palatal shelves contact each other forming the secondary palate; the shelves also contact anteriorly with the primary palate dividing the oral and nasal cavities.

Development of the jaws

The mandible appears as a band of dense fibrous tissue known a Meckel’s cartilage; this cartilage provides a framework around which the bone will form.

Bone formation commences at the mental foramen area and begins to spread backwards, forwards and upwards outlining the future body of the mandible. As the bone grows backwards, two small secondary cartilages develop, which eventually form the condyle and coronoid processes. Anteriorly, the left and right mandibular plate of bone is separated by cartilage at the mandibular symphysis; these two plates eventually unite to form a single bone approximately 2 years after birth. The upward growth of bone increases the height of the mandible forming the alveolar process which will surround the developing tooth germ.

Ossification of the maxilla commences at the area of the developing primary (deciduous) canines; from this area, bone formation spreads, developing the maxillary processes: palatal, zygomatic, frontal and alveolar. Growth of the maxilla occurs by remodelling of bone and by sutural growth. The stimulus for sutural bone growth is thought to be related to the tension produced by the displacement of bone. Growth carries the maxilla forwards and downwards as it increases in size.

Development of the vestibular band and dental lamina

Development of the tooth germ

At 8 weeks of intrauterine life, clumps of mesenchymal cells induce the dental lamina to form swellings known as enamel organs. Each enamel organ will be responsible for the development of each tooth (Figure 1.4a).

Figure 1.4 Stages in the development of the tooth germ. 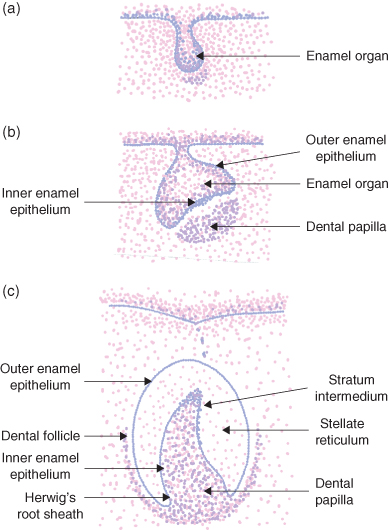 By 14 weeks of intrauterine life (Figure 1.4c) the enamel organ consists of the following:

At the late bell stage the dental lamina disintegrates and is ready for the formation of dental hard tissue. Dentine formation always precedes enamel formation.

Development of the dental tissues 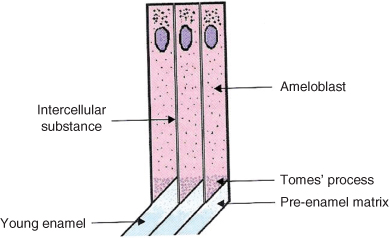 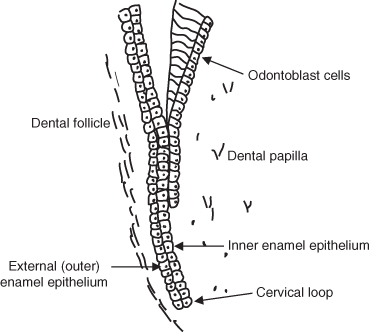 Formation of the root

Formation of the periodontal ligament

The eruptive force of tooth eruption is unclear; however, several theories have been put forward although there is little evidence to support them. These are:

The approximate initial calcification and eruption dates are listed in Tables 1.1 and 1.2.

Table 1.1 Approximate dates of tooth development, eruption and exfoliation for the primary dentition.

Table 1.2 Approximate dates of tooth development and eruption for the permanent dentition.

The three primary layers of an embryo are described as:

The surface of the oral mucosa consists of epithelial tissue. Epithelial tissue is first classified according to the shape of the cells as being squamous (flat cells), cuboidal (cube shaped) or columnar (tall, narrow cells) and second by the number of cell layers. A single layer of epithelial cells is called simple and where there are several layers it is called stratified.

The oral mucosa consists of:

Figure 1.9 Diagram of the structure of the oral mucosa. Reproduced by kind permission of R. Ireland. 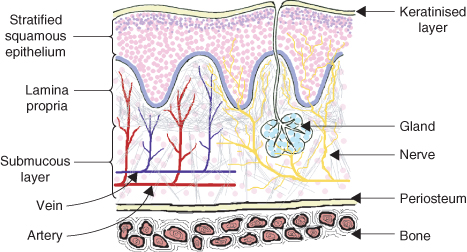 The structure of the mucous membrane varies in different parts of the oral cavity according to the variation in function. In areas subject to chewing such as the hard palate and the attached gingivae, the mucosa has a firm keratinised epithelial layer of fibrous protein (also found on the palms of the hands and soles of the feet). In other areas such as the cheeks and floor of the mouth that require more flexibility, this is reduced or absent. The cells of this keratin layer have no nuclei and no nerve supply.

The oral cavity is kept lubricated by mucus secretions from the major and minor salivary glands; this epithelium is sometimes termed mucous membrane.

There are three types of oral mucosa found in the oral cavity.

There are therefore three types of muscles:

All the oral musculature consists of striated voluntary muscle. The cells are cylindrical, unbranched and multinucleate. They contain actin and myosin which are contractile proteins. The cells are arranged in bundles (fascicles) surrounded by connective tissue which also serves to anchor the muscle to bone in the form of a tendon.

The most important glands of the oral cavity are the salivary glands. The principal salivary glands are the parotid (situated buccal to the upper molars), submandibular and sublingual (located in the floor of the mouth). There are in addition a number of minor salivary glands on the surface of the tongue, the internal surfaces of the lips and in the buccal mucosa. 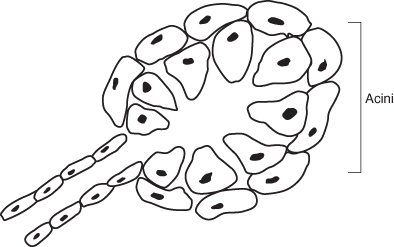 The composition of saliva is subject to individual variation. It consists of 99.5% water and 0.5% dissolved substances that are made up of:

Bone is a specialised form of dense connective tissue. Two types of bone can be distinguished:

Bone is subject to constant remodelling by osteoblastic and osteoclastic (bone destroying) activity. The bone tissue of the maxilla is more vascular and less dense than that of the mandible.

The following features of dentine are significant:

Peritubular dentine tends to increase with age reducing the diameter of the dentinal tubules.

The tubules may also become completely obliterated and when this happens the dentine becomes more translucent; this is termed translucent or sclerotic dentine.

Reparative dentine or irregular secondary dentine is laid down on the pulpal surface of the dentine in response to an external stimulus, such as caries, cavity preparation or excessive wear. Following a severe stimulus, the odontoblast process may be destroyed and the contents of the tubule then necrose leaving the dentinal tubule empty; this is termed a dead tract.

There are many theories for the mechanism of dentine sensitivity. The principal current theories are:

Enamel is laid down in layers which produce incremental growth lines. After each successive layer the ameloblasts retreat so as not to be trapped within their matrix. Some growth lines mark daily deposits which are about 4 μm thick; these are called cross striations.

The following features of enamel are significant:

Cementum has a similar structure to bone. It may be classified by the presence or absence of cells:

The following features of cementum are significant: