Understand as hygienists a tidal wave of ailing or failing implants may be imminent. It is imperative that hygienists are trained in identifying and treating peri-implant mucosal inflammation that could affect overall body health. (1)

Dental hygienists must be ready and be prepared to take on this next, very important challenge in our profession! The 21st century is an important and critical time to be a hygienist. During this exciting time in dentistry, we as hygienists have a critical role in implant therapy. As a hygienist, your role will be to access patients for healthy periodontium prior to placement of implants, to monitor the tissue surrounding the implants, and to maintain the implants through safe, effective implant maintenance. Current studies reveal that infections in the periodontium occur in more than 50% of implants placed (2). Therefore we as dental professionals will be faced with different dynamics, challenges, and complications.

As a hygienist the history of implant dentistry makes you aware that implants are not new, but have been evolving for decades. Patients may have concerns that implants are so new that not enough research or development has been done for them to feel comfortable with the procedure. With your knowledge of the history, design, and research done on implants you will be better able to talk with your patients and answer these concerns. A fundamental understanding of key terms and statistics associated with implant dentistry will also be a valuable tool to add to your verbal skills when talking with patients about tooth replacement.

Believe it or not, the history of dental implants dates back to 600 AD with the ancient Mayans. Dr. and Mrs. Wilson Popenoe found the lower mandible of a young Mayan woman in Honduras in 1931 (Figure 1.1). She was missing some of her lower teeth and they had been replaced with the earliest example of the first dental implants, made from pieces of shell shaped to resemble teeth. Scientists believe that these shells may have actually worked. Slots were made into the bone and the shells were pounded in like little wedges, without anesthesia! 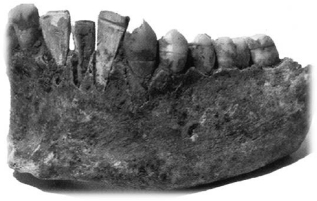 Similar discoveries were made in Egypt, artifacts that date back to the 1700s. Ivory and the bones of animals were also sometimes used to replace missing teeth. It would be decades after these archaeological discoveries before the modern world caught up with the Mayans’ and Egyptians’ dental technology.

In the late 18th and 19th centuries, the level of dental care went through many changes. Through the letters, journals, and accounts left by our first president, George Washington, we have a well-documented case history of his lifelong dental problems and the level of dental care available at that time. George Washington started losing his teeth at age 24 and by 1789, the year that Washington took his oath of office, he had only one of his original teeth left (Figure 1.2). 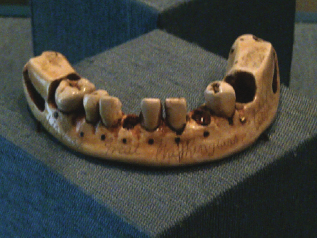 Dr. John Greenwood made a set of dentures for Washington made of hippopotamus ivory and eight real human teeth attached by brass screws. The denture, which was anchored on the one remaining tooth in Washington’s mouth, has a hole that fit snugly around the one tooth. Dr. Greenwood was noted to be quite ahead of his time in his dental practice, extracting teeth and utilizing them in the manufacture of dentures, but he also experimented with implantation.

Unfortunately for Dr. Greenwood, the 18th century’s lack of antibiotics and any understanding of germ theory or antisepsis doomed any such experiments to failure. He did make President George Washington several sets of dentures, none made out of wood as often referred to. They were made from gold, ivory, lead, and human and animal teeth (horse and donkey teeth were common components), with springs to help them open and bolts to hold them together.

In the 18th century, researchers experimented with gold and other metal alloys including lead as implants. Dr. Maggiolo fabricated gold implants that were placed in sock­ets where teeth had recently been extracted and after a healing period attached a “donor” tooth. Dr. Harris, a physician, attempted the same procedure with a platinum post, both had poor results.

Dr. Edmunds in 1886 was the first in the United States to implant a porcelain crown mounted on a platinum disc and presented at the First District Dental Society of New York. Other metal alloys with porcelain crowns were experimented with, but these implants did not have a long-term success rate.

Dr. E.J. Greenfield, pioneer of the endosseous implant, provided many of basic concepts of nascent field of implantology. He was known for his patented hollow-cylinder implants made of wire soldered with 24 karat gold. This hollow-basket design was a similar design that Straumann Implant Company from Switzerland adopted many years later. He presented his research and surgical technique in 1913, and although histological proof of bone-to-implant contact was not available at that time, he understood the clinical importance to what he called “primary stability” or osseointegration. His surgical techniques, stepwise use of drill diameters starting with round bur, were presented in 1913 and are still practiced today (3).

It wasn’t until 1937 before the first relatively long-term implant success was noted. Dr. A.E. Strock used the metal alloy Vitallium®, placing a series of implants at Harvard University in animals and humans. He published a paper on the physiological effects of Vitallium in bone, with no post-operative complications or reactions noted, total toleration. These were the first relatively successful dental implants and certain types of implants are still cast in Vitallium today.

The turning point of implant dental his­­tory happened in the 1950s, when Professor Per-Ingvar Brånemark, an orthopedic sur­­geon, discovered that titanium components can bond irreversibly with living bone tissue. His team designed many studies on the healing effects of bone with one specific study on rabbits in which a titanium metal cylinder was screwed in a rabbit’s thigh­­bone. A several-month healing period and other experiments of the blood circulation in animals using a hollow titanium cylinder demonstrated that the titanium cylinder fused to the bone. Brånemark named this discovery osseointegration (the firm, direct, and lasting biological attachment of a metallic implant to vital bone with no intervening connective tissue) (Figure 1.3). 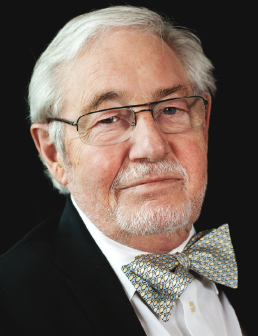 Brånemark’s research and other colleagues from other disciplines evolved this theory of osseointegration along with the design of the “Brånemark titanium screw” device with a number of specific surface treatments to enhance bioacceptance with bone. One of the key reasons that titanium was chosen by Brånemark is his relationship to Hans Emneus, an orthopedic surgeon, who studied different metals used for hip joint prostheses. His research indicated that a new metal, titanium, from Russia and used in nuclear industry, might be optimal. Brånemark used a sample from Russia and from there on the best metal for implants has been pure titanium.

In 1964, commercial-grade pure titanium was accepted as the material of choice for dental implants. Other bodies of medicine (e.g., joint replacements) had recognized the fact that the body does not recognize titanium as a foreign material, which results in higher success rate and fewer rejections. Eventually the use of commercial pure titanium evolved into the use of titanium alloys (TiAl6V4 being the most commonly used) due to experimentation and improved durability.

In 1981, Dr. Per-Ingvar Brånemark published his findings covering all the data on the animal and human clinical trials: success rate, concept, and the design of endosteal root-form titanium implants most commonly placed today. In an effort to gain international support and collaboration, based on patient care with sound biological and clinical principles Brånemark founded the Association of Brånemark Osseointegration Centers (ABOC).

Brånemark identified the edentulous patient as an amputee, an oral invalid, to whom we should pay total respect and rehabilitation ambitions. He was also instrumental in identifying the mouth as a much more important part of the human body than medicine and controlling agencies had previously recognized. He coined the term osseoperception, “the dentate mouth communicates with the brain, possibly improving not only daily function, but also being an important factor in restitution after intra-cranial vascular events” (P-I Brånemark, September 2005).

In the 21st century, technology and clinical awareness will take on more importance. The science and clinical advancements have made it possible for oral and maxillofacial surgeons, periodontists, and general dentists in the United States to double the number of implants performed per dentist between 1995 and 2002.

Ancient history: Mayans back in AD 600 had dental implants made from pieces of shell and ancient Egyptians used shells and ivory.

1700s: Lost teeth were often replaced with teeth from human donors. The process was mostly unsuccessful due to immune system reactions to the foreign material.

1800s: Researchers fabricated gold, platinum, and other metal alloys, including lead, into posts that were placed into the sockets of extracted teeth and donor teeth were attached after a healing period.

1886: Dr. Edmunds was the first in the United States to implant a porcelain crown mounted on a platinum disc and presented at the First District Dental Society of New York.

1913: Dr. E.J. Greenfield, pioneer of endosseous implant, provided many of basic concepts of the nascent field of implantology. He was most known for his patented hollow-cylinder implants made of wire soldered with 24 karat gold and outlined surgical implant placement technique (Figure 1.4). 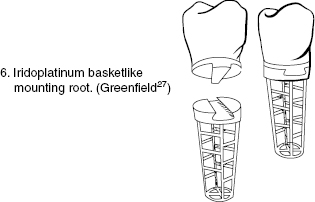 1939: Dr. A.E. Strock introduced the first biocompatible material, the metal alloy Vitallium, to place a series of implants at Harvard University in animals and humans. He is credited with the first relatively long-term successful dental implants.

1941: Dr. Gustav Dahl of Sweden is credited with the development of the subperiosteal implant, a metal framework that is surgically placed on top of the jawbone for completely edentulous patients (Figure 1.5).