1 Impact of sleep disorders on society

Impact of sleep disorders on society

Approximately 50–70 million people in the United States are chronic sufferers from sleep disorders, who have impaired health and daily functioning issues as a result of those disorders.1 The societal economic impact of sleep disorders is estimated at $16 billion annually for health care expenses and $50 billion annually regarding lost productivity.2 Sleep disorders are considered to be one of the most common health problems, and yet it has been demonstrated that between 82 and 98% of adults with sleep-related breathing disorders (SRBD) are undiagnosed.3,4

Sleep disorders can no longer be thought of in simple terms as having a poor night’s sleep. There are currently a large number of different sleep disorders that may affect one’s quality of life. In addition, there is a difference between the sleep state and the wake state. Sleep is not simply an altered state of consciousness, that is merely a difference of being asleep or being awake.

Sleep is a totally separate behavioral and physiological state that is unique and well documented, and it is defined as “a reversible behavioral state of perpetual disengagement from and unresponsiveness to the environment.”5 As such, sleep is composed of a combination of rapid eye movement (REM) and nonrapid eye movement (NREM) associated with well-defined and variable brain activity.6 Sleep disruption and the specifically recognized sleep disorders not only may have a major impact on an individual’s well-being, health status, and quality of life, but may also render significant consequences on the various areas of public health, such as accidents, mortality, morbidity, work and other daily performance, cognitive function, and utilization of health care.

Epidemiology is the study of the geographic distribution and the risk factors of a particular disease,7 and, in particular, how that disease impacts the health status of different and varying populations. Relative to sleep disorders, the origin and onset of a specific sleep disorder are often multifactorial. As such, it is essential for there to be an epidemiological awareness of both normal and abnormal sleep and wake patterns. The ultimate goal of this greater appreciation of sleep disorder epidemiology is the improvement in people’s health as well as a foundation for preventative medicine and public health.

The eventual outcome of these early epidemiologic studies of normal and abnormal sleep patterns resulted in the publication of the International Classification of Sleep Disorders that has since been revised into its current second edition (ICSD-2).8 The ICSD-2 is the evidence-based standard for the classification, terminology, and diagnostic criteria of sleep disorders. Currently, the most common sleep disorders on the basis of epidemiologic studies are the following:9

The general onset of sleep disorders as well as their progression is, to some degree, dependent on age,10 the presentation of being at risk for health-related consequences, and trauma. In many instances, these disorders may appear as a health issue and perhaps even some type of emotional or psychological condition. Also, the presentation of the particular health issue is sometimes not first recognized or diagnosed as maybe having an association with a sleep disorder. As an example, SRBD patients may seek treatment and utilize more health care resources for cardiovascular disease (e.g., hypertension) prior to the recognition of the SRBD as being the possible underlying cause11 (Figure 1.1).

In addition to the overall statistics of the portion of a population that suffers from the general label of sleep disorders, the prevalence of these disorders are often referenced to the epidemiologic studies pertaining to each of the classifications recognized in the ICSD-2. Thus, the actual distribution of a specific sleep disorder is variable and dependent on the study that is being referenced.

Relative to the three most common sleep disorders, a 1993 study is the most frequently cited reference relative to SRBD.3 In this study of 602 people, it was determined that 24% of men and 9% of women are at risk for SRBD, and it also demonstrated that 4% of men and 2% of women met the criteria for SRBD, who also have daytime hypersomnolence or excessive daytime sleepiness. The correlate to this is a study that indicated 93% of females and 82% of males with moderate-to-severe SRBD are undiagnosed, and 98% of females and 90% of males who have less severe sleep apnea are undiagnosed.4 A more recent study demonstrated that a minimum of 12–18 million people in the United States are affected by untreated SRBD.12

Figure 1.1. Clinical recognition and diagnosis of sleep apnea. The proportion of all cases of sleep apnea is represented by the iceberg, with clinically diagnosed cases shown in the tip of the iceberg. Clinically recognized sleep apnea represents 85% of the total prevalence of sleep apnea cases that would be candidates for treatment. CVD, cerebrovascular disease; SES, socioeconomic status.

indicate that these particular “selection factors” are not as well known as “comorbidity” relative to the recognition and diagnosis of sleep apnea. (Young T. Rationale, design, and findings from the Wisconsin Sleep Cohort Study. Sleep Med Clin, 2009; 4(1):39. Reprinted with permission.) 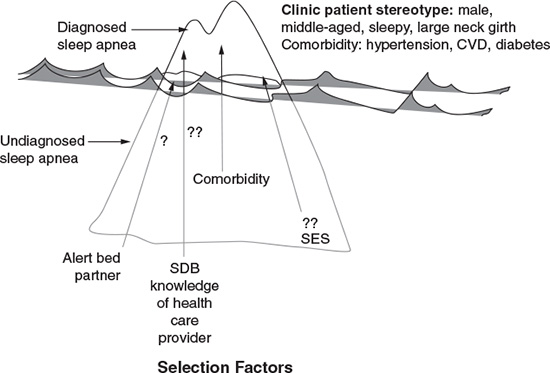 The epidemiology of RLS is estimated to be between 2.5 and 10% of the general population.14 Many of the studies have limitations because of misdiagnoses as well as patients who may not seek medical care. With improved criteria for making a diagnosis, the recognition of RLS may actually result in an increased prevalence.

Narcolepsy is another sleep disorder that has been studied epidemiologically. At the present time, its prevalence is between 25 and 50 per 100,000 population,15 which is a prevalence similar to multiple sclerosis.

There are a multitude of risk factors that may impact the onset as well as the progression of a specific sleep disorder. The risk factors may be different for each disorder, and there may also be overlapping risk factors that apply to a number of different sleep disorders. In general, the demands of modern-day life have impacted the quality of one’s sleep as well as the required amounts that are deemed appropriate. In addition, the disruption of an individual’s sleep can impact other family members, roommates, or one’s bed partner. As an example, the results of a study pertaining to SRBD demonstrated that the snoring of one person significantly impacted the sleep of the bed partner to the point that the affected person had symptoms that were worse than those of the snorer.16

The risk factors frequently associated with the three most common sleep disorders are listed in Table 1.1.

The impact of sleep disorders on one’s health can be evident in a wide range of adverse health consequences, including but not limited to hypertension,17–19 cardiovascular diseases,20–27 metabolic disorders such as diabetes,28–32 gastric disorders such as gastroesophageal reflux disease,33–36 respiratory disorders such as asthma,37 emotional and psychological disorders,38–41 and increased mortality rates.42 The heightened awareness that assorted health issues potentially may arise as a result of sleep disorders is improving. Similarly, an illness or health problem may conversely impact one’s sleep.

The increased risks for cardiovascular disease and elevated blood pressure associated with SRBD are well-documented. The largest and frequently cited investigation, the Sleep Heart Health Study, took place between 1995 and 1998 as a cohort study with more than 6,000 people enrolled as participants.43 This study found that obstructive sleep apnea (OSA) along with other SRBD are risk factors for cardiovascular disease, which is inclusive of myocardial infarction and stroke. A variety of proposed mechanisms indicate that OSA and cardiovascular disease are related, and elevated blood pressure is the more common one.

Insomnia, which is the inability to fall asleep or to maintain sleep, is often associated with emotional, psychological, or depressive disorders. In addition, it can be associated with painful conditions as well as other health issues. As a sleep disorder, insomnia is the most common and may occur in conjunction with other sleep disorders such as OSA and RLS. Everyone may have insomnia at some point in their life.

Alteration in metabolic and endocrine functions is also associated with SRBD, the most prevalent of which is type 2 diabetes. It has been found that snoring alone increases the risk for type 2 diabetes independent of any other risk factors.28