From Ancient Times to the Pioneering Era

Osseointegration and the Scientific Era

From the Fully Edentulous State to Single Tooth Replacement

At the conclusion of this chapter, the reader will be able to:

. Understand the series of diagnostic, design, surgical, and prosthetic innovations that have made contemporary single tooth implants predictable and widely used.

Single implants have expanded the ability of dentists to provide predictable replacements for missing or hopeless teeth. The ultimate outcome—a satisfied patient—is the result of careful assessment and meticulous surgical and prosthetic procedures by the dental team.1

Treatment outcomes for single implants are now excellent. Long-term success and survival rates are equivalent to those for endodontically treated teeth and are superior to those for tooth-supported fixed partial dentures.2–6 Short-term bone-level, soft tissue, and esthetic results are also excellent.7 However, complication rates and the need for additional interventions may be higher than desired.5,8,9 The scientific study of prognostic factors for single implants is still in its infancy.6,9,10 However, dentists need to make prudent treatment decisions now. Dentists also need to minimize the possibility of complications and the need for additional corrective procedures. Patients expect predictability, long-lasting functional results, minimally invasive procedures, comfort, minimal risks, minimal complications, and cost-effectiveness.11

How was the success of the single implant achieved? How can we continue to meet patients’ demands with even greater predictability in the future? A review of the history of single implants can guide us. This chapter frames the many innovations that have made single implant treatment predictable, accessible, and widely applicable. It is an introduction to the detailed descriptions of current procedures and future directions found in the rest of the text. This book serves as a guide to single implant planning and technique through a review of the best available evidence, the opinions of leading experts, and descriptions of current procedures.

From Ancient Times to the Pioneering Era

From the very beginning, humans have strived to retain their teeth (Figure 1-1) and also to replace teeth; a pleasing smile has had enormous psychosocial importance since earliest times. Stone, metal, ivory, and sea shell implants are all cited in the archaeological records of China, Egypt, and the Americas. Success was extremely rare. In 1685, in the first modern textbook on dentistry (Operator for the Teeth), Charles Allen suggested that the teeth of dogs, baboons, and sheep be used for implantation. However, the possibility of disease transmission was recognized.12 Transplantation was also described by Pare, Fauchard, and by Hunter, who used boiling for disinfection.13–15 Autotransplantation still has a place in clinical dentistry today. In 1807 Maggiolo developed a single-stage gold implant that was to be placed in fresh extraction sockets and allowed to heal passively without loading; however, pain and inflammation resulted.16 At the beginning of the twentieth century, Greenfield17 introduced latticelike precious metal basket implants that were used to support complete dentures and single teeth. This hollow basket design continued to inspire implant designs used through the 1990s. 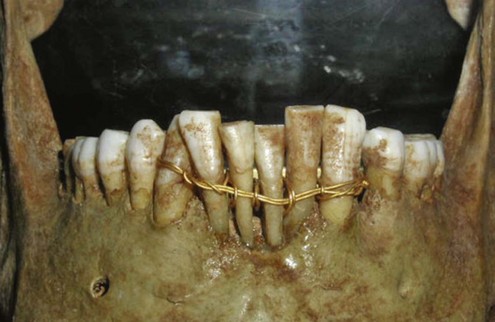 Figure 1-1 Frontal view of a mandible discovered in Lebanon at the ancient site of Sidon. The mandible is from about 500 BC and the periodontally involved anterior teeth have been splinted together with gold wire. (Courtesy the Archaeological Museum, American University, Beirut, Lebanon.)

From the 1930s through the 1960s, new metallic alloys were used to form a variety of subperiosteal implants (Figure 1-2), which are classified as eposteal (placed on or upon bone) implants. Other types of implants include endosteal blade implants (Figure 1-3) and transmandibular or staple implants (Figure 1-4). These approaches were generally directed toward supporting multiple prosthetic teeth. Most of these implants were one piece and were not fully submerged; various one-stage endosteal root form pins, screws, and cylinder designs were also developed. Linkow18 developed a variety of implant designs during this period but was best known for blade-type implants, which were designed to maximize the contact area between bone and implant. 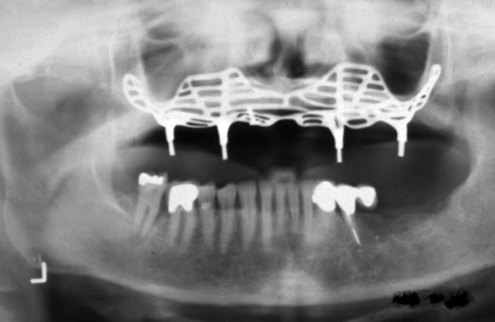 Figure 1-2 Maxillary subperiosteal implant with four posts that will be used to support and retain a prosthesis. (Courtesy R. James.) 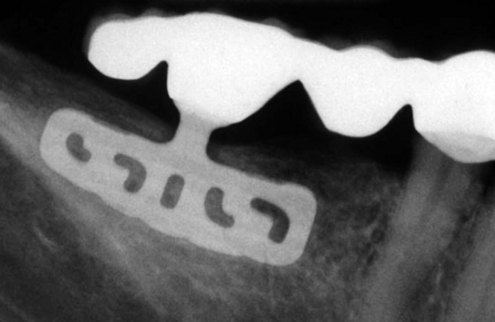 Figure 1-3 Periapical radiograph of a blade implant that supports the distal aspect of a mandibular fixed partial denture. 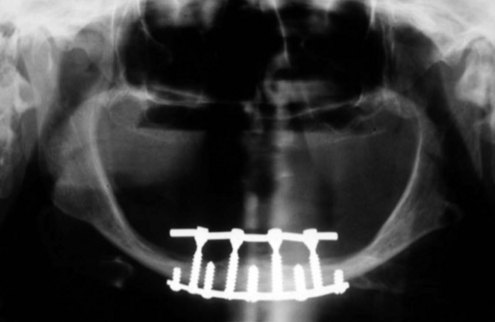 Figure 1-4 Panoramic radiograph of a one-piece transosseous implant consisting of a metal plate located on the inferior border of the mandible, five posts that are placed into the mandible, and four posts that pass through the mandible. A bar has been attached to the four posts to provide retention and stability for a mandibular implant overdenture.

In the 1930s Strock19 used immediate placement and a porcelain crown for single tooth replacement using a Vitallium implant. He reported a 15-year case study, noting the role of occlusion, and described the histology. Adams20 considered a two-stage surgical procedure for placing a cylindrical screw implant with a healing cap. In the late 1940s, Formiggini21 introduced a helicoidal screw tantalum implant. This design was modified by Chercheve in the 1960s to increase the distance between the screw threads and implant head (Figure 1-5).22 Some of these endosteal designs began to resemble contemporary solid, cylindrical or moderately tapered, threaded osseointegrated implants (Figure 1-6). Although the Dental Implants—Benefit and Risk Consensus Development and Technology Conference held in 1978 at the Harvard School of Dental Medicine set new standards for reporting implant data, an overly broad and liberal definition of implant “success” was permitted.23 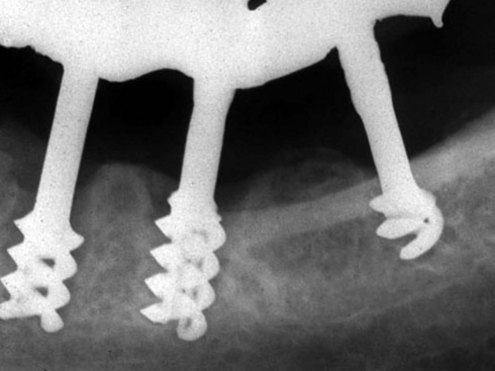 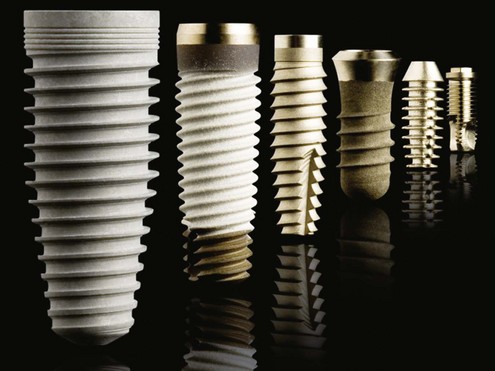 Figure 1-6 Several endosseous root form implants have been aligned so that the different designs, thread patterns, and surfaces can be compared. The original Brånemark external hex implant can be seen at the end of the row.

Meanwhile, the results of decades of research by Dr. Per-Ingvar Brånemark in Sweden were coming to fruition. By then other implant teams, notably in Germany and Switzerland, were developing dental implants concurrently with Brånemark’s team in Sweden. At this point, they were still unable to produce long-term clinically successful outcomes.24 However, those teams later produced successful systems (e.g., Schroeder [now Straumann] and Frialit [now Dentsply]).25

Osseointegration and the Scientific Era

Brånemark began to publish a series of experimental studies on the use of intraosseous anchorage of dental prostheses in the late 1960s, leading to a landmark, 10-year study in 1977.24,26 His two-stage threaded titanium screw-type root form implant (Nobelpharma, now Nobel Biocare) was first presented in North America in 1982 (see Figure 1-6) at the Toronto Implant Conference organized by Dr. George Zarb.27 Brånemark described the work he had started two decades earlier in Gothenburg, Sweden, which had been recently replicated in Toronto. Brånemark discovered the ability of titanium to osseointegrate with bone to provide robust, long-lasting anchorage for dental implants. Zarb defined osseointegration as, “A process whereby clinically asymptomatic rigid fixation of alloplastic materials is achieved and maintained in bone during functional loading.”24,28

Brånemark described the placement of implants in the healed edentulous ridges. His original protocol for dental implant placement included a two-stage implant system, pure titanium screw-type implants, 6 to 8 months of healing after extraction; sterile conditions; use of a mucobuccal flap; placement of machined titanium implants in a two-stage approach; and a 3 to 6 months stress-free healing period. Well-documented, long-term, prospective landmark studies by Adell, Albrektsson, and others offered clear evidence of prolonged survival, function, and bone maintenance.29,30 Albrektsson, Brånemark, and Zarb described new criteria for implant success that included absence of mobility and radiolucency, low rates of vertical bone loss, absence of signs and symptoms, and a minimum l0-year success rate of 80%.31–33 The 1988 Consensus Development Conference on Dental Implants held at the National Institutes of Health added several more suggestions to those made in 1978.34 These included necessary descriptions of the study population, independence of the examiners, adjustments in sample size because of attrition, reasons for attrition, and documentation and follow-up of failures. As osseointegration became a clinical reality, many additiona/>

Tags: Principles and Practice of Single Implant and Restoration
Jan 7, 2015 | Posted by mrzezo in Implantology | Comments Off on 1: History of Single Implants
Premium Wordpress Themes by UFO Themes
WordPress theme by UFO themes