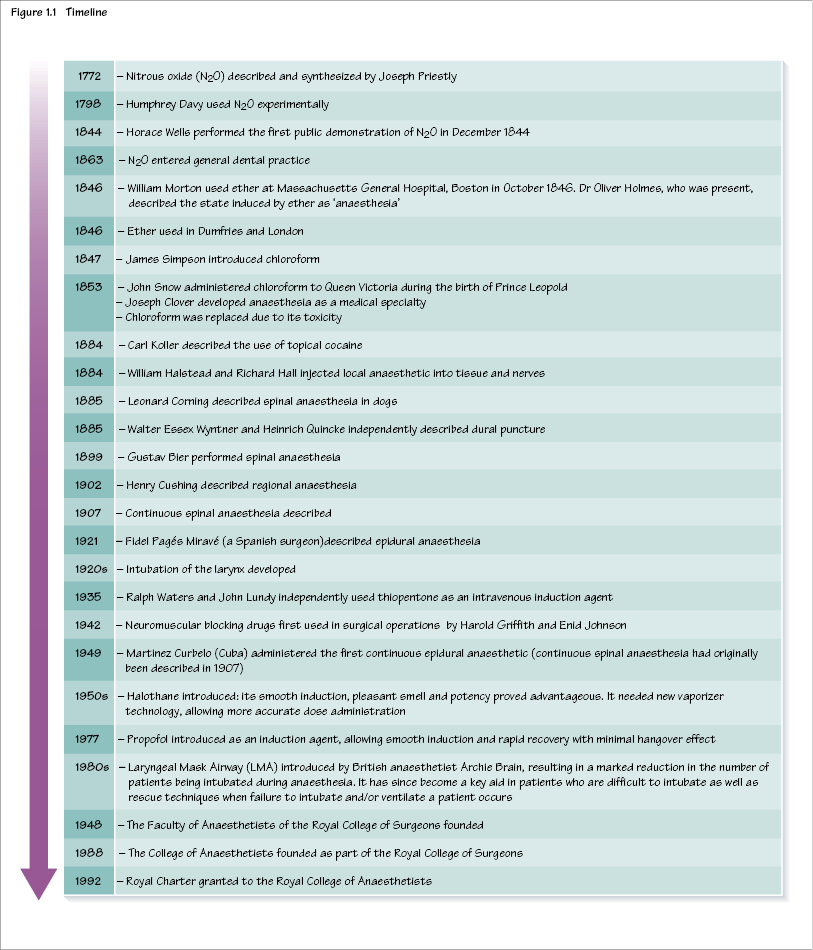 Before the introduction of anaesthesia, it would not have been possible to carry out the majority of modern operations. Development of the triad of hypnosis, analgesia and muscle relaxation has enabled surgery to be performed that would otherwise be inconceivable.

Early attempts at pain reduction included the use of opium (described in Homer’s Odyssey 700 bc), alcohol and coca leaves (these were chewed by Inca shamans and their saliva used for its local anaesthetic effect).

Attempts at relieving childbirth pain could (and did) result in accusations of witchcraft.

If surgery had to be performed, it usually involved restraint, administration of alcohol and the procedure being performed as quickly as possible (amputations often took a matter of seconds).

Nitrous oxide (N2O) was described and first synthesized by Joseph Priestly in 1772. It was used experimentally by Humphry Davy, who also introduced its use to London intellectuals at the time, such as the poet Samuel Taylor Coleridge, engineer James Watt and potter Josiah Wedgewood. Priestly also discovered oxygen, describing it as ‘dephlogisticated air’.

The first documented use of N2O was in North America, by Horace Wells (a dentist) in Hartford, Connecticut in December 1844, for a dental extraction in front of a medical audience. The patient cried out during the procedure (although later denied feeling any pain) and Wells was discredited, never to fully recover and eventually committing suicide.

In October 1846, William Morton (also a dentist) used ether at the Massachusetts General Hospital, Boston during an operation on a neck tumour, performed by surgeon John Warren. Dr Oliver Holmes, who was present, described the sta/>

Tags: Anaesthesia at a Glance
Jan 12, 2015 | Posted by mrzezo in Oral and Maxillofacial Surgery | Comments Off on 1: History of anaesthesia
Premium Wordpress Themes by UFO Themes
WordPress theme by UFO themes